The Jaguars Elevate to 4-4 in a Total Team Stance 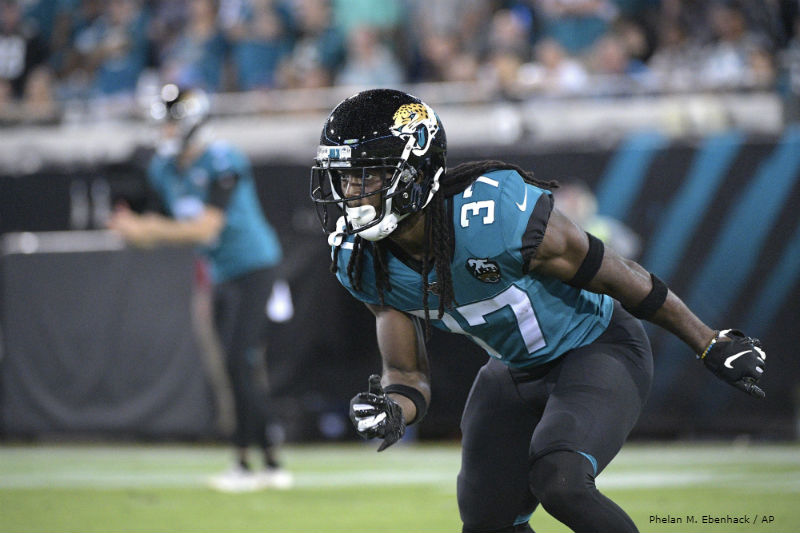 The Jacksonville Jaguars, eyeing .500 coming into this match-up with the New York Jets, opened up the game with a touchdown on their initial drive. Running back Leonard Fournette helped set up the short field when he took the second play of the game 66 yards up the gut with his legs. Just two plays later, quarterback Gardner Minshew, II, was well-protected in the pocket, stood strong, surveyed the field, and sent the ball to wide receiver Keelan Cole for a six-yard score to place the Jaguars on the board first, 6-0, after the missed extra point by kicker Josh Lambo with just 2:21 off the game clock.

But Jacksonville's defense would succumb to New York on New York's very first drive of the game that followed, with tight end Ryan Griffin catching a pass from quarterback Sam Darnold and heading forward for a 24-yard touchdown. Also on this drive, the Jets took almost seven minutes off of the game clock, running it down from 12:39 to 4:51.

The Jaguars would punt away their second drive of the match-up, but cornerback Tre Herndon, who took the place of trade-away cornerback Jalen Ramsey, intercepted Darnold on the Jets' second play of their second possession to give the offense the ball back from their own 27.

Jacksonville capitalized off of Herndon's first career interception with a two-play drive that took a mere 50 seconds off the game clock, with Minshew eluding a sack attempt and sending the ball to wide receiver Chris Conley by New York's 40-yard line, which Conley took to the house for a 70-yard score to move Jacksonville back ahead, 13-7, with 1:11 left in the opening quarter.

At the end of the first 15 minutes of the game, the Jaguars had two plays of more than 60 yards within their three first-quarter drives, with Fournette's 66-yard run on their first drive and Conley's touchdown on a 70-yard pass play.

The Jaguars forced the Jets to punt the ball away on their second-quarter drive and wide receiver/returner Dede Westbrook received the punt, ran to the outside, and stayed up for a 24-yard gain to the Jets' 36-yard line. However, Minshew would fumble the ball, giving it right back to the Jets at the 13:03 mark of the second quarter on that same 36-yard line. The sack and forced fumble came from New York defensive line Jordan Willis.

Jacksonville defensive end Josh Allen would sack and strip Darnold on New York's next possession. Darnold's fumble would end with the ball going out-of-bounds, but Allen's defensive effort would force a punt following that play, preventing New York from capitalizing on the Jacksonville turnover.

Jaguars' wide receiver D.J. Chark, Jr., would get out in front of cornerback Brian Poole and Minshew would find him for a 29-yard gain out to their own 40-yard line with approximately 10:30 before halftime. Minshew kept the drive alive on that play as well as with a 14-yard completion to Conley, a quarterback keeper for a 13-yard gain, a 10-yard pass play to Chark, and an 11-yard play to tight end Seth DeValve, with all of these plays coming on third down, except for the DeValve catch.

Minshew went 6-for-7 on this drive, guiding the offense on a possession that took almost nine minutes off of the second-quarter game clock, from 11:53 to the 2:57 mark of the quarter.

This drive would end with a 29-yard field goal by Lambo to move Jacksonville out to a 16-7 lead with 2:57 before the break.

Defensive end Dawuane Smoot would stay with Darnold and bring him down for a nine-yard loss on a sack that brought the game to the two-minute warning, and forced the Jets into a 4th-&-20 situation from their own 15.

As a result, New York woudl punt it away. Wide receiver Dede Westbrook would return the punt, fumble the ball, and recover his own fumble, which was forced by outside linebacker Brandon Copeland, placing Jacksonville on their own 36-yard line to start this drive.

Minshew was 4-for-8 on the drive, with three incompletions at the end of the possession, but his completion to Conley for 13 yards and the middle of the field got the Jaguars to the Jets' 25-yard line, setting up a 43-yard field goal by Lambo to elevate the Jaguars up to a 19-7 advantage with 11 seconds before halftime.

New York would take a knee and head into the locker room, receiving the ball after the break.

Both teams would begin the second half with a punt, keeping the score at 19-7 Jaguars with 6:53 to go in the third quarter.

On the Jets' second drive of the third quarter, strong safety Ronnie Harrison reached out and took down Darnold for a sack and a six-yard loss that led to the Jets to punt it away again, starting the second half with two punts.

The Jaguars would receive the ball at their own 30, and Minshew would guide the team forward once again, along with some help from the Jets, who received back-to-back penalties for hits on Minshew, one for unnecessary roughness after a run by Minshew and the latter for roughing the passer, tacked onto Fournette's catch-and-run, moving the Jaguars to the Jets' nine-yard line by three minutes remaining in the third quarter.

Minshew's next two pass attempts would fall incomplete, but Lambo's field-goal attempt would help secure that Jacksonville came away with some points, with the 24-yard field goal placing Jacksonville ahead 22-7 with 2:11 left in the third quarter.

Heading into the fourth quarter, defensive end Calais Campbell would pick up a solo sack on Darnold for a loss of six yards.

But Darnold and wide receiver Demaryius Thomas would keep the drive going when Darnold found Thomas for a 23-yard gain.

Jaguars' head coach Doug Marrone challenged the play, but the ruling on the field was upheld, keeping the Jets on the Jaguars' three-yard line with 1st-&-Goal.

With just under nine minutes to play, the Jets were looking to close the gap as Darnold sent the ball in the direction of wide receiver Vyncint Smith, but the ball was intercepted by Jaguars' cornerback A.J. Bouye and then returned 25 yards to the Jets' 24-yard line.

Jacksonville would capitalize off of this Bouye takeaway when Minshew rolled out right, saw pressure, staired it down, and tossed the ball to the front right corner of the end zone, finding Chark for an eight-yard touchdown pass play on third down to extend the Jaguars' lead to two touchdowns, 29-15, with 4:13 to go.

Herndon, who attained his first-ever professional interception in the first half of this game, got his second with 3:18 to go in the game, taking the ball away from Darnold and the Jets on the Jaguars' 42-yard line.

With 2:42 to go, Josh Allen gained his second sack of the game. This drive would end with a turnover on downs by New York when Darnold's pass attempt to wide receiver Jamison Crowder fell incomplete.

Jacksonville took over on the New York 27-yard line, letting the clock run down to the two-minute warning, with New York out of timeouts.

The Jaguars would kneel their downs away, giving the Jets the ball with 34 seconds to play. New York would run one play before time expired, with Jacksonville obtaining their second win at home for the season, 29-15.

Minshew 22-for-34 for 279 passing yards, three touchdowns, and no interceptions to go with eight carries for 28 yards.

Fournette accumulated 76 yards on 19 carries to lead the Jaguars' rushing attack and Conley led all Jacksonville receivers with 103 yards, catching four balls, including one for a score.

Darnold ended the contest 21-for-30 for 218 passing yards, two touchdowns, and three interceptions.

Running back Le'Veon Bell led a quiet backfield performance against the stout Jaguars' defense, gaining 23 yards on nine carries, with no scores.

Griffin, at tight end, led all Jets' receivers with 66 yards, catching four passes, two for touchdowns, along with a two-point conversion catch. Demaryius Thomas was close behind with 63 yards on five catches.