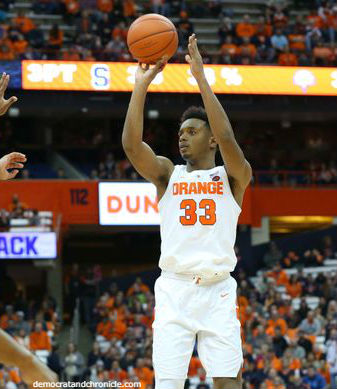 So far, Mack has amounted an 18-8 record overall and a 9-4 record inside the Atlantic Coast Conference (ACC) along with a Top-25 national ranking in his first season with the Cardinals.

Syracuse, unranked, would be the team at the top most of the first half, however, leading for 15 minutes and 36 seconds of the 20-minute game clock.

Louisville, despite having five players who are 30% or better from beyond the arc this season, went 1-for-13 in the first half from long range, a mere 7.7%, and Syracuse would take a double-digit lead into the halftime locker room, ahead by 12, 35-23.

Orange sophomore forward Oshae Brissett was the lone player on either side to accumulate double-figures in points in the half, getting as many as the difference in the game between the two teams, 12 points.

Sophomore forward Jordan Nwora would lead the Cardinals at the half with nine.

Both squads were close at the break in second-chance points, Louisville with eight and Syracuse with nine, the Cardinals with seven offensive boards and the Orange with six in the first 20 minutes of play.

The Cardinals would strike first in the second half, with two free throws from redshirt-junior forward Dwayne Sutton followed by a steal and dunk by graduate guard Khwan Fore.

Brissett would get the first points of the second half for the Orange, scoring on a layup to go up by double-digits once again, 37-27, at the 17:28 mark.

Redshirt-junior guard/forward Elijah Hughes would knock down two deep shots, followed shortly after by two three-pointers by true freshman shooting guard Buddy Boeheim, and then Hughes would connect again to give Syracuse five three-pointers in a span of six minutes and eight seconds (13:40 mark to the 7:32 mark). Syracuse would advance out to a 56-38 advantage with 7:32 remaining.

Playing with four fouls, sophomore forward Marek Dolezaj went in between two defenders and rose for a finger-roll at the rim and completed the old-fashioned three-point play with the following free throw to provide Syracuse with a 62-41 advantage.

Boeheim would connect on his fourth three of the game, and third of the second half, with 1:39 to play.

After Hughes' two free throws at the 1:15 mark that gave the Orange a 67-43 lead, head coach Jim Boeheim would bring on the walk-ons as well as scholarshipped true freshman forward Robert Braswell to finish the contest.

Braswell would score the final points for Syracuse at the rim with 21 seconds to go, and the Orange would roll over the Cardinals with a 20-point victory, 69-49.

This win gives Syracuse another signature win over a Top-25 nationally-ranked team and moves the Orange to an 18-8 overall record and a 9-4 in-conference record.

The Orange would have four players finish in double-figures, Hughes with 18 with all of his field goals coming from three-point range, followed by Brissett with 16 on 7-for-15 shooting, Boeheim with 14, going 5-for-10 from the field overall and 4-for-9 from beyond the arc, and junior shooting guard Tyus Battle amounting 11.

Of the eight players who were on the court for at least 10 minutes in this game, only one Cardinal scored in double-digits, that being Nwora, with 11. Syracuse only allowed Nwora two points in the second half.