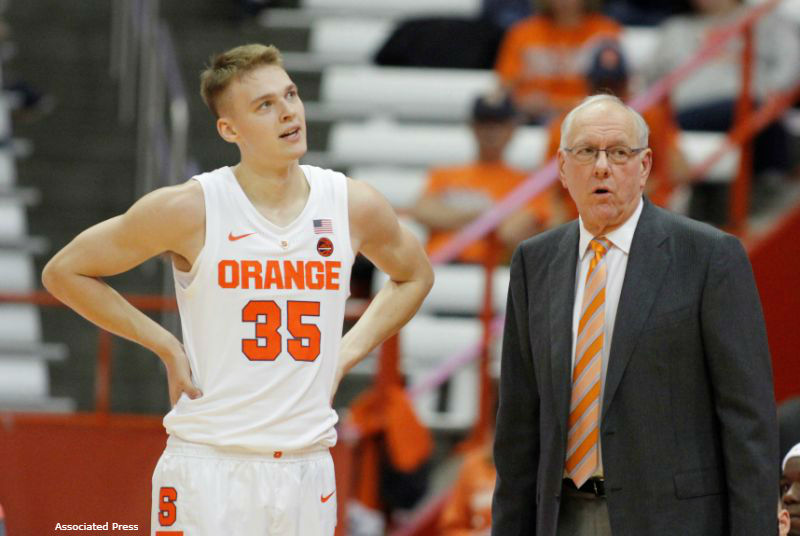 The Syracuse Orange opened the Dome to a match-up with longtime rival, the Pittsburgh Panthers, coming in with a record of 68-45 against them.

It took the Orange just 12 seconds into the game to score when redshirt-junior guard/forward Elijah Hughes launched from outside for three to make it 3-0 Syracuse at the 19:48 mark.

Pittsburgh sophomore forward/center Terrell Brown would respond immediately with a three of his own to tie the game.

A layup by sophomore forward Oshae Brissett would move the lead back to the Orange, at 5-3.

Syracuse would hold the lead for three minutes and 49 seconds until freshman guard Xavier Johnson's three that made it 8-7 Pittsburgh at the 15:06 mark.

Thanks to five straight points from Brissett, the Orange took the lead back at 12-11 at the 12:46 mark of the first half.

Syracuse would go on an 11-0 run before a putback at the rim by Pittsburgh that brought the game to 18-13 Orange.

Coming off of the bench, true freshman and son of head coach Jim Boeheim, Buddy Boeheim, would knock down both of his beyond-the-arc tries.

Junior shooting guard Tyus Battle's five points of the first half would come back-to-back with a three followed by a deep two from straight on which game the Orange their first double-digit lead of the game, at 26-15.

All of Battle's seven first-half points would come inside 5:05 before the break.

A blunder by senior center Paschal Chukwu would be followed by a 5-0 run by the Panthers that made it 28-24 Orange. It began when Brissett swatted away an attempt by Pittsburgh and Syracuse senior center Paschal Chukwu got the rebound on the defensive end. In the corner still on the Panthers' end, Chukwu did not pass off to teammates nearby, but instead through across court. The pass was intercepted by Pittsburgh senior guard/forward Jared Wilson-Frame who knocked down a three. Xavier Johnson would make the layup that followed.

The Orange would open up the second half not scoring until the 16:03 mark, but they still had the lead, with a three from Hughes moving them out to a 31-27 advantage.

Battle's first points of the second half come right by the 14:30 mark from a jumper in the lane, making it 36-27 Syracuse.

A layup by Battle would come shortly after followed by Battle feeding Chukwu for a wide open dunk to bring the score to 40-27 Orange. The throwdown by Chukwu would have a baseline, one-handed slam from Hughes coming on its heels.

With 11:12 to go in the second half, Battle had already equaled his first-half scoring, with seven points, after a three that extended the Orange out to a 45-30 lead. Battle surpassed his first-half scoring when he cashed in from long range and then stole the ball and skied for a one-handed dunk right after, giving him 12 points at this time in the second half. His 19 total points were registered with Syracuse ahead 19, 50-31, in the game.

Sophomore forward Marek Dolezaj would take the ball on the baseline, fake a shot, and dribble down toward the basket, timing his shot, and making it off the glass to put the Orange ahead 52-35 with 8:32 to go.

With 7:41 to play, Syracuse had gotten out to a 20-point advantage, 59-39, thanks to Buddy Boeheim's third three of the game, on his third try, giving him nine points in 12 minutes on 3-for-3 shooting.

Brissett would look to take some of that Pittsburgh momentum away when he dunked home his attempt at the rim with a body on him to give Syracuse a 61-49 advantage.

Buddy Boeheim would make his fourth three of the contest immediately after to move the Orange up to a 64-49 lead with 4:31 to play. He would miss his following attempt, giving Boeheim a 4-for-5 outing from beyond the arc.

With the Panthers threatening once again within 10, Dolezaj would see a cutting Battle and send the ball from the top of the key inside, with Battle finishing at the rim, giving Dolezaj his fifth assist of the game and Syracuse a 67-55 lead.

At the 1:14 mark of the second half, Pittsburgh was back within 10 points after freshman guard Au'Diese Toney stole the ball from Brissett and laid it in, making it 67-57 Syracuse.

Despite missing 11 free throws as a team, the Orange would go 7-for-8 from about a minute to play, winning 74-63 over the rival Panthers, their 69th all-time win over the Panthers.

Speaking of fouls, Battle played the final 4:06 with four fouls, never fouling out of the game.

With the victory, Syracuse is now 13-5 on the season and 4-1 in Atlantic Coast Conference (ACC) play.

Wilson-Frame and Xavier Johnson were the two Panthers to finish in double-figures, with 19 and 17, respectively.

Battle led all Orange and all teams overall with 22, followed on the Syracuse roster by Boeheim with 13 and Brissett with 11. The 13 points scored by Buddy Boeheim are a single-game personal career high.

The Orange finished the game 46.3% from the field, including a 46.2% performance from three-point range, making 12 of their 26 tries.