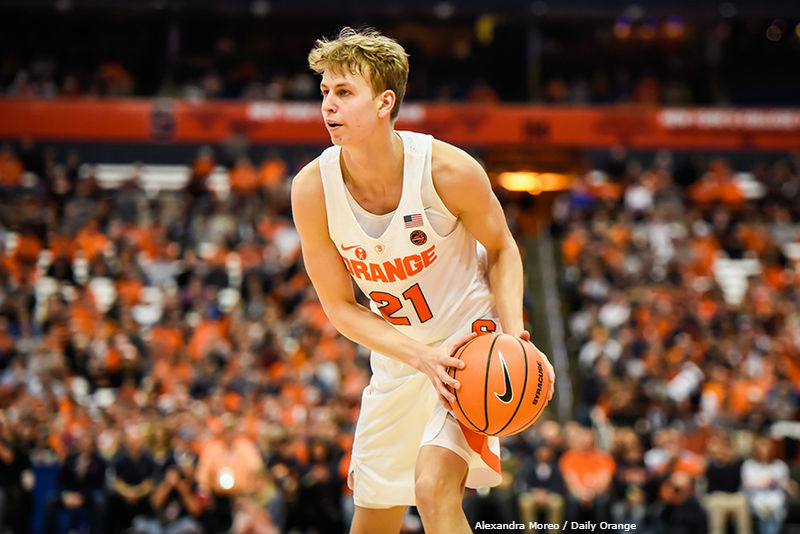 The scoring began with Syracuse junior shooting guard Tyus Battle's jumper from the left side to give the Orange the first lead of the game, 2-0.

But Clemson would respond immediately with a three to take their first lead of the game, 3-2.

The Tigers would go on a 5-0 run out to a 5-2 lead, but sophomore forward Marek Dolezaj would knock down a three to tie the game at 5-5.

Sophomore center Bourama Sidibe would make up for a turnover by Battle when he blocked Clemson's try at the other end. That block would lead to an Orange possession that concluded with redshirt-junior guard/forward Elijah Hughes getting a tough two at the rim to give Syracuse their second lead of the game, at 7-5.

After helping to get the Orange two, Sidibe would get two of his own when he fought in the paint and elevated up.

Dolezaj would impress offensively once again when he almost lost the ball but stayed with it, went toward the basket, and rose up for a one-handed jumper that would give the Orange a 17-9 advantage.

Syracuse attained their first double-digit lead of the game when true freshman point guard Jalen Carey fed sophomore forward Oshae Brissett who ran over to bail him out; Brissett's tough take under the basket made it 19-9 Orange.

Clemson, down by as many as 12 in the first half, would get within two possessions, down six, with 4:27 to play, 23-17, thanks to a 6-0 run. That run was broken by Howard's jumper, but a three by sophomore forward Aamir Simms right after would get the Tigers to a five-point deficit, 25-20.

Two physical plays made back-to-back by Brissett and then Battle extended the Orange out to a nine-point advantage, 29-20, with about two minutes before the break. The make by Battle was a one-handed jumper from the baseline that fell through the nylon.

The Orange had no offensive rebounds in the first half until Dolezaj pulled one down with 26 seconds before the break.

The first two points of the second half went to the same team as in the first, when Hughes made both free throws by the 19-minute mark to get the Orange back to a double-digit advantage, 32-22.

Senior point guard Frank Howard would obtain the first made field goal by either team in the second half when he connected on a baseline jumper at the 18:40 mark, bringing the score to 34-22 Orange.

Two made three's early in the second half shrunk Syracuse's lead to two possessions, 34-28, with 16:11 to play. Sophomore guard Clyde Trapp and gradduate guard Marcquise Reed accounted for the deep makes.

Dolezaj, however, would elevate the Orange back to a double-digit lead with his second three of the game, this from straight on, to give Syracuse a 38-28 advantage, making him 3-for-5 from the field and 2-for-4 from long range.

With eight points, four assists, three rebounds, two steals, one block, and no turnovers in 25 minutes, Dolezaj was met with a round of applause and cheers from the fans as well as his coaches and teammates standing to greet him at the bench when he took a breather with 13:01 to play.

Clemson would match Syracuse 11 to 11 in points to bring the score to 54-43 Orange before Reed would's jumper in the paint lowered the Tigers' deficit back down to single-digtis, 54-45.

With the inclusion of the following three, Reed scored seven straight points for Clemson, making it a two-possession game at 54-48 Syracuse.

In three minutes and change, starting at the 7:10 mark of the second half, the Orange had four turnovers, only taking two shots, and missing them both, in that span of time.

A flagrant 1 was called on Reed with 1:01 to play, resulting in the Tigers' leading scorer fouling out; he had 16 points in 37 minutes.

Howard would make both free throws coming from the flagrant on Reed and  garduate guard Shelton Mitchell would account for the final field goal of the game with 20 seconds left, bringing the end score to 61-53, advantage Orange.

With the victory, Syracuse improved to 2-0 in the Atlantic Coast Conference (ACC), while Clemson went the opposite way, falling to 0-2 in conference play.

The Orange played eight, and six of them scored with Hughes leading the way, amounting 14, followed by Howard and Battle each with 12, Dolezaj with 10, Brissett with nine, and Sidibe with four. Carey and fellow freshman guard Buddy Boeheim ended scoreless on the night.

Dolezaj would end with 10 points, four rebounds, four assists, two steals, two blocks, and no turnovers in 30 minutes of action.