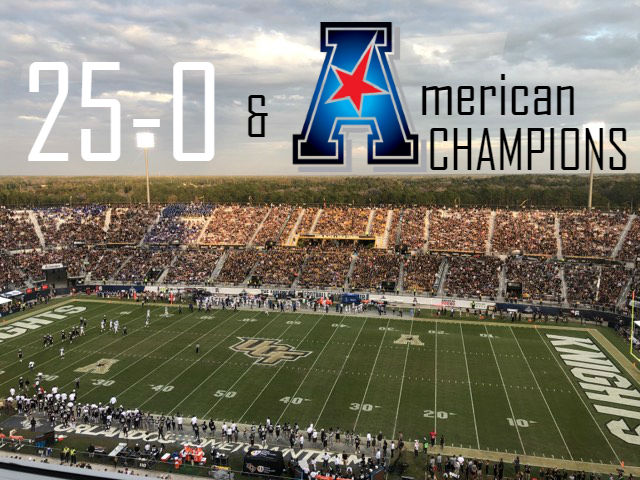 The UCF Knights and Memphis Tigers lined up a year from the last American Athletic Conference (AAC) Championship game to do it again, back at Spectrum Stadium in Orlando, Florida, for the rights to raise their banner above the rest, the same situation both teams put themselves in in 2017.

An interception in double overtime placed the championship in the hands of the Knights last season, something Memphis head coach Mike Norvell was onsite to see against Scott Frost at the time.

With Norvell returning to central Florida, he now had a shot at an AAC title once again, with a new adversary in Josh Heupel on the opposite sideline.

UCF won the opening toss and elected to defer. Memphis responded with a 62-yard touchdown run on their opening drive coming from the legs of junior running back Darrell Henderson on just the fourth play of the drive, resulting in the Tigers striking first, ahead 7-0 just one minute and 47 seconds into the game.

Memphis would use this takeaway to tack on another touchdown to the scoreboard when Henderson ran it in from 12 yards out on just the second play of the Tigers' second drive, elevating their lead to 14-0 on the Knights, three minutes and five seconds into the contest.

UCF would achieve four first downs on their second drive of the contest, with Mack eluding a sack attempt en route to a first down off of a quarterback keeper, followed shortly after by sophomore running back Greg McCrae's 14-yard scamper through traffic into an open lane to the end zone, making it 14-7 Memphis, at the 9:48 mark of the first quarter.

The Tigers would go 3-for-3 by scoring on their third straight drive to open the game when junior running back Patrick Taylor, Jr., rushed to the outside left and outran everybody to his longest touchdown of his career and of the AAC Championship history, a 70-yard dart to the Knights' end zone, clawing the Tigers out to a 21-7 lead at the 8:22 mark of the opening quarter.

Memphis averaged 30.6 yards per carry, rushing for 153 yards on just five carries in their first three drives combined to start the game.

With a 36-yard field goal by sophomore kicker Riley Patterson, the Tigers scored on all four of their first-quarter drives, getting out to a 24-7 advantage with 1:30 remaining in the quarter, a lead the Tigers would take out of the first 15 minutes of action.

Mack would fumble for a third time in the first half alone, by the 12-minute mark of the second quarter, when he faked the handoff and ran for the quarterback keeper. He reached the ball out to try and cross the goal-line and lost the handle, but senior tight end Michael Colubiale bailed Mack out, recovering the ball in the Memphis end zone for a touchdown, making it 24-14 Memphis with 11:52 before halftime.

But Henderson would respond with his third rushing touchdown of the game, this an 82-yard burst to the end zone, where Henderson eluded a tackle attempt by his shoulder and then left everyone in a cloud of his dust, giving the Tigers a 31-14 advantage with 11:24 before the break. This touchdown gave Henderson three rushing touchdowns on just six carries, and 166 rushing yards with over 11 minutes to play in the first half.

Inside 9:30 to play before the break, UCF forced Memphis to punt the ball for the first time in the game, ending Memphis' streak of scoring drives at five in a row to begin the game.

On their next drive, Mack found junior slot receiver Dredrick Snelson, Jr., downfield on a 48-yard pass play to move the Knights from their own 24 to the Tigers' 28-yard line. But the drive would end in a turnover on downs when McCrae failed to gain a yard on a rush on 4th-&-2. UCF was in field-goal range on that play. However, they decided to try for the first down on fourth down and came away with nothing, still down 17 points with approximately seven minutes before the break.

Despite losing the ball on downs though, UCF would get possession back by forcing Memphis to punt for the second-straight drive, with 3:45 to go in the second quarter.

Two back-to-back gainers for the Knights brought them from just outside their own end zone to the three-yard line of the Tigers, the first a pass downfield to sophomore wide receiver Gabriel Davis for a 44-yard gain, followed by a 47-yard run by McCrae immediately after.

UCF would conclude the drive with a fake quarterback keeper by Mack that ended in Mack going overtop to sophomore tight end Jake Hescock for a touchdown to bring UCF within 10, 31-21, with 2:41 to go in the second quarter. This touchdown pass serves as the first collegiate touchdown pass by Mack for his career.

The Knights' defense would force the Tigers to punt for the third-straight time in the game after allowing the Tigers scores on five-straight drives prior to.

Junior tight end Sean Dykes would catch a ball thrown toward two Tigers' receivers, moving the Tigers back out to a 17-point lead, 38-21, with 21 seconds to go in the second quarter. The touchdown pass would come from Henderson. Yes, Henderson. The running back who already had three rushing scores in the game.

At the end of the first two quarters, UCF trailed at home by 17 to Memphis.

Memphis had 336 yards on the ground alone in the first half. These yards came on 26 carries, giving the Tigers an average of 12.9 yards per carry to go with four rushing touchdowns in the opening 30 minutes before halftime. Henderson had 207 of the 336 rushing yards and three of the team's four first-half rushing touchdowns.

On the first drive of the second half, Mack found Otis Anderson for a 54-yard pass play that was close to being a potential interception. Instead, Anderson reeled in the ball and crossed over the threshold to bring UCF within 10 again, 38-28, just two minutes and 39 seconds into the third quarter.

After allowing five scores on the first five drives of the game by the Tigers, the Knights would not let history repeat itself, forcing the Tigers to punt on their first drive of the second half. Otis Anderson would return the ball 43 yards, waiting for his time to strike, eyeing opportunities and turning on the jets when he saw his chances, starting UCF's second drive of the second half at the Memphis 44.

That setup by Anderson was capitalized on by the Knights' offense, as Mack rolled in untouched on a quarterback keeper from four yards out to bring UCF within a field goal of Memphis, down 38-35 with 6:55 remaining in the third quarter.

A win for the Knights on their next defensive drive would be giving up three to the Tigers instead of six, with the Tigers inside their redzone. Memphis' dropped touchdown attempt gave UCF exactly that when Patterson booted a 19-yard attempt in to bring the Tigers ahead 41-35 with 2:13 remaining in the third quarter.

Bringing their next drive from the end of the third and into the final quarter, UCF elected to go for it on 4th-&-1. It turned out to be the right decision when McCrae ran for a 50-yard gain to the Memphis 2.

Mack would fight for the final two yards on his quarterback keeper to give the Knights their first lead of the game coming with 14:28 left to play, ahead 42-41.

UCF would have back-to-back pass breakups on Memphis' following drive to force a field-goal try, credited to senior defensive back Rashard Causey and then redshirt-junior Nevelle Clarke. Patterson's 46-yard field goal attempt would fall outside of the goalpost, giving the Knights possession on their own 28-yard line, still ahead by one.

The Knights would lean on their ground game on their next drive, gaining 63 yards en route to a two-yard touchdown keeper by Mack to extend the Knights out to a 49-41 lead with 6:37 to play.

UCF's defense would follow by ending the next Memphis drive by obtaining their first sack of the game on redshirt-junior quarterback Brady White, which would result in a Tigers' punt on 4th-&-15 with under 5:30 to play.

A drive that would begin with an early 48-yard pass-play from Mack to Snelson would end with Mack in the Memphis end zone on a five-yard keeper, his fourth rushing touchdown of the game, giving the Knights a 56-41 lead with under three minutes to go, which they would carry to the final buzzer.

Mack, filling in for an injured McKenzie Milton, would end the contest with two passing touchdowns to no interceptions, along with four rushing touchdowns.

Henderson ended the game with 210 rushing yards on 16 carries, an average of 13.1 yards per carry, with three rushing touchdowns to go with a passing touchdown as well.

Just like a season ago, the Knights end the AAC Championship game with an interception in the end zone on Memphis.

This is UCF's second-straight AAC Championship victory, and 25th consectuive win, dating back to the beginning of the 2017 season.