Jaguars Sputter At Home, Wake Up Too Late in the Game 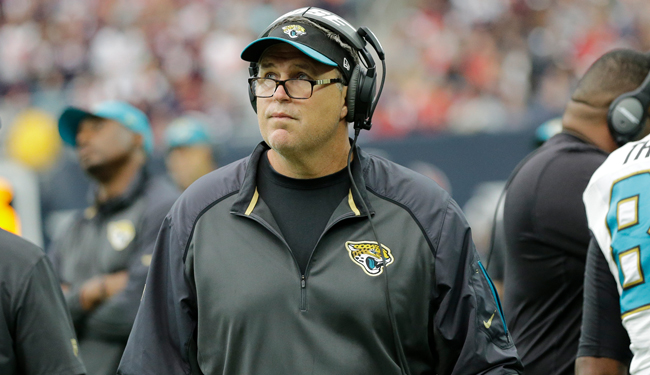 At Week 2 of the 2017-18 NFL season, the Jacksonville Jaguars were already facing their second divisional rival with the Tennessee Titans coming to Duval county for the Jaguars' home-opener following the Jaguars' road win against the Houston Texans, 29-7, in Week 1.

The first half of this match-up was very quiet on the scoreboard, with neither team getting into glory territory.

Instead, the Jaguars and Titans traded field goals within less than a minute from each other in the first quarter, with Jacksonville placekicker Jason Myers connecting from 43 yards away followed by Tennessee placekicker Ryan Succop's response from 40 yards out.

Then, neither team would put a single point on the scoreboard until Succop booted his second try of the game through the uprights from 41 yards away as time expired on the first half.

Riley's interception gave Tennessee the drive that concluded with Succop's second field goal of the game.

Jacksonville came out of the break with more offensive woes when Bortles threw his second interception on the team's opening second-half drive on a pass intended for wide receiver Marqise Lee that instead ended up in the hands of Tennessee safety Da'Norris Searcy.

As with the first Titans' interception, the team would capitalize on their takeaway by gaining points, when Succop made his third field goal of the game, this one from 26 yards away to take a 9-3 lead early in the third quarter.

Less than three minutes later, Titans' running back Derrick Henry scored the first touchdown for either side in the game, 38 minutes and 24 seconds into the game, on a 17-yard carry, moving the Titans ahead 16-3.

Not even four minutes later, Tennessee reached the endzone again, with yet another rush, this coming from tight end Delanie Walker from one yard out to expand the Titans' lead to 20, ahead 23-3 with 2:53 remaining in the third quarter.

Rookie tight end Jonnu Smith would follow his mentor into the endzone in the fourth quarter with 9:57 left to play in the game for the first touchdown of his National Football League (NFL) career on a 32-yard reception play, moving Tennessee up to a 30-3 advantage.

With 7:12 left to play in the game, Jacksonville scored their first touchdown of the contest when rookie running back Leonard Fournette went dead center on the carry for a one-yard touchdown run to make it 30-9, marking his second score of the season; Fournette now has a touchdown per game in his first two games in the NFL.

The two-point conversion pass attempt from Bortles in the direction of wide receiver Allen Hurns fell incomplete and the Titans came right back to score once again when fullback Jalston Fowler attained his second touchdown of his NFL career, now in his third season out of Alabama, providing a 37-9 lead with 4:14 to go.

After not scoring a touchdown for the first three quarters and change, the Jaguars scored on back-to-back drives when wide receiver Allen Hurns took it home on a seven-yard reception play to follow Fournette's previous score, making it 37-16 with 2:11 to play in the contest.

Though Jacksonville finally answered after allowing 30 unanswered points to Tennessee, it was too little, too late in the game, and the Jaguars would take the loss in their home-opener to go to 1-1 on the season as well as inside the AFC South division.