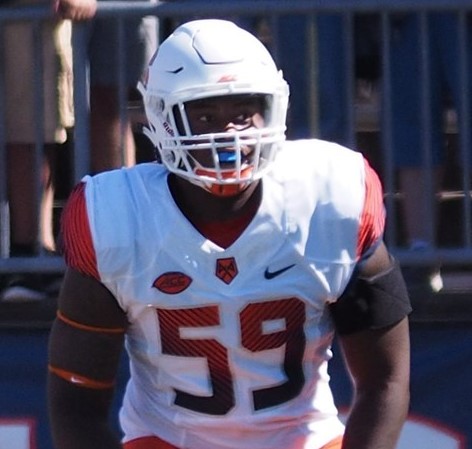 Not even a full year after starting all 12 games for the Syracuse Orange, offensive lineman Aaron Roberts will now be watching from the sidelines.

Roberts suffered a left knee injury in summer conditioning that will now leave the Orange without a starter to protect quarterback Eric Dungey and company.

He started every game for Syracuse in the 2016 season at the left guard position on the offensive line, and came out of Spring practice in 2017 keeping his starting spot at left guard for the upcoming season, before this unfortunate injury.

Roberts led the entire Orange offensive line in 2016 in both knockdown blocks, with 39, and snaps played, with 968.

Early freshman enrollee Patrick Davis is the next man up on the Spring depth chart heading into Fall camp at the left guard position. He is a true freshman out of Champlain Regional College and is a native of Gatineau, Quebec, Canada.  Davis has been with the Orange since January of 2017 and has yet to take a collegiate snap. At Champlain, he played at center, guard, and tackle, and was a team captain in his senior year.

Due to the fact that he sat out the 2014 season as a true freshman, Roberts will have two seasons of eligibility remaining moving forward for the 2018 and 2019 seasons, if the NCAA awards him a medical waiver for 2017.