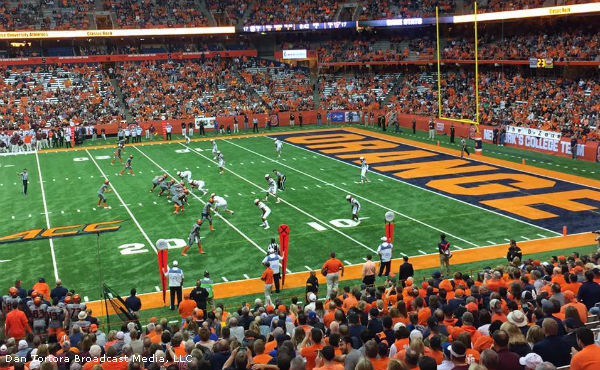 The Syracuse Orange opened rolling, gaining first downs on each of their third-down situations on their opening drive of the game, the second of those third-downs turning into a 58-yard touchdown pass play between quarterback Eric Dungey and wide receiver Ervin Philips who got in front of his defender, gathered the reception over his shoulder, and took off.

Philips' touchdown came a mere 1:49 into the game, providing Syracuse with an early 7-0 advantage.

The Orange wasted no time making their presence felt defensively when, on the Virginia Tech Hokies' first possession, Orange defensive end De'Jon Wilson sacked Hokies' quarterback Jerod Evans on a drive that would end in a three-and-out for the Hokies.

Syracuse's offense would sputter after gaining a new set of downs on their second drive of the game, punting the ball away.

Despite allowing Virginia Tech to move close to their redzone, Syracuse prevented a touchdown and Virginia Tech settled for a field goal from 36 yards out, off the foot of kicker Joey Slye to make it 7-3 Syracuse with 6:13 left in the first quarter.

The Orange would punt again, and again, on their next two drives after failing to gain a first down on their third and fourth drives of the game; Syracuse had achieved at least one first down on both of their first two drives.

At the end of the first quarter, Syracuse and Virginia Tech had each punted three times and Syracuse had as many first downs as punts, with three apiece.

The Orange started the second quarter as they did the first, with a quick score. This time it was an 84-yard trick pass play where Dungey tossed the ball to running back Dontae Strickland who threw the ball downfield to wide receiver Brisly Estime, leading to a touchdown just two plays into their fifth drive of the game, just 11 seconds into the second quarter, giving Syracuse a 14-3 advantage.

Kicker Cole Murphy came on to attempt his first field goal try of the game, and the Orange saved themselves, calling a timeout that preceded Murphy kicking from 50 yards away and hitting the right goalpost.

After the timeout, Dungey comes on for Syracuse's first fourth-down try of the game, a 4th-&-5 attempt. Wide receiver Steve Ishmael caught the ball in single-coverage, but was out-of-bounds, leading to a turnover on downs on the Hokies' 33-yard line.

Officials review the PLAY and overturn their ruling, stating that Ishmael had a foot down, keeping the ball with the Orange and placing them on the Hokies' 2-yard line.

Syracuse chose to attempt the pass on three straight downs before going for it on 4th-&-1, where they attempted their first running play from inside the 2-yard line, only to have Dungey stopped short, turning the ball over to Virginia Tech being just one yard away from paydirt.

Still at 14-3, the Orange would gain the ball back and bring about a new set of downs four times on their drive midway through the second quarter. On this drive, Dungey would injure his right leg and backup Zack Mahoney would enter onto the field, having to recovering a fumble on his only play on that drive.

Murphy would attempt his first field goal of the contest, from 53 yards away, and come up well short of the uprights.

Syracuse would add insult to injury, literally, with the defense allowing Virginia Tech to move rapidly down the field after Dungey went down and Murphy missed his first field goal try.

However, a holding penalty would negate Evans running into the end zone untouched, leaving Slye to attempt a field goal from 45 yards away, which he sent wide left, giving the Orange a break after a series of unfortunate events.

Syracuse would have Dungey back on the following drive, with Mahoney only having been on the field for one play of the prior drive, and the Orange would roll down the field and stop with nine seconds before the break, where Murphy would attempt his second field goal of the game. This time, Murphy was not short, not even close. Instead of the previous 53-yard try that was well in front of the goalposts, this 51-yard attempt had enough momentum to go another few yards, sending the Orange to the half ahead 17-3.

Just as the notion ran across the mind that Syracuse had to make sure this game does not end up becoming a tale of two halves like others prior this season, such as the contest with the South Florida Bulls, Syracuse allowed Virginia Tech down the field quickly for their first touchdown of the game, a 12-yard reception in the end zone by wide receiver Isaiah Ford from Evans.

In Dungey's attempt to respond, he sent the ball down the field in Philips' direction but did not prepare for the Hokies' spy, as linebacker Tremaine Edmunds leapt in the air to grab the interception.

However, though Dungey's decision negated that drive, safety Rodney Williams did the same right back at the Hokies, intercepting Evans in the Orange end zone.

On the ensuing drive, Syracuse went for it on fourth down for the fourth time in the game, and converted, moving the chains on 4th-&-3.

Murphy would attempt another 51-yarder, and this one would go wide left, keeping the score at 17-9 Syracuse.

After not allowing a touchdown in the first half, the Orange gave up two in the second half between the third quarter and the early seconds of the fourth.

The Hokies would have their extra point following the first touchdown blocked by Orange defensive end Kendall Coleman and picked up by safety Rodney Williams, while a two-point conversion would follow the second touchdown, tying the game at 17 apiece with 13:53 left in the game.

Syracuse would gain a new set of downs on a fourth-down attempt once again, this time on 4th-&-2. On that same drive, the Orange would run the ball on four straight plays, three of them quarterback keepers by Dungey, including the final yard needed to regain the lead. With 7:56 to play, the Orange held a 24-17 lead.

The Orange defense would force a punt and on their following offensive drive, the Orange rolled right back into the Hokies' end zone, once again on the ground, as Strickland carried the ball into glory territory from 16 yards out, elevating the Orange to a 31-17 advantage.

Syracuse's De'Jon Wilson, who began the game with a sack on Evans on Virginia Tech's first play, came up big late as well, recovering Evans' fumble that was forced by defensive tackle Chris Slayton, providing the Syracuse offense with possession and 4:08 left to play.

The Orange continued to run at the Hokies on their final drive, and the Hokies remained on their heels.

Syracuse never trailed the entire game on their way to defeating a Top-20 ranked team in Virginia Tech (17th in the Associated Press and 19th in the Coaches' Poll) 31-17 to win their first game in conference play inside the Atlantic Coast Conference (1-2) and hand Virginia Tech their first in-conference loss (2-1).

The Orange improve to 3-4 overall.