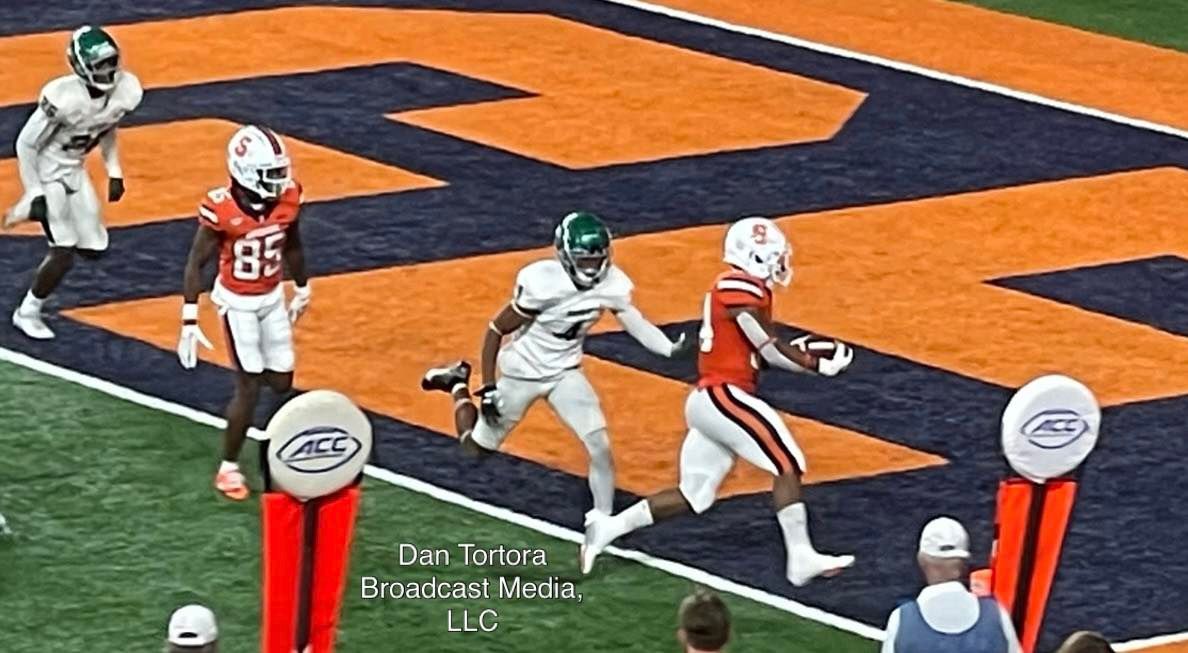 Looking to keep a zero in the loss column, the Syracuse Orange (Atlantic Coast Conference or ACC) hosted the Wagner Seahawks (Northeast Conference or NEC) midday on the first day of October.

Wasting no time, the Orange rolled into the end zone on the opening drive of the game, with junior quarterback Garrett Shrader going 3-for-3 on his passes and a mixture of Shrader and sophomore running back Sean Tucker carrying the ball five times, including Shrader's one-yard keeper for the score that made it 7-0 Syracuse at the 11:23 mark of the first quarter.

The Orange defense would stop the Seahawks after six plays, forcing Wagner to punt on their first drive.

Shrader would start Syracuse's second drive going 2-for-2 followed by a keeper and two rushes by Tucker, the second seeing him burst through an opening on the left side and charging 61 yards to "glory territory", bringing the score to 14-0 Orange with 5:32 left in the opening quarter.

Syracuse's defense would hold serve and force Wagner to punt on their second drive of the contest.

With 78 net yards and no yards lost, Tucker averaged 13 yards per carry on his six carries over the first two drives. He began Syracuse's third drive of the game just 47 yards away from passing Orange running back alum Moe Neal on the team's all-time rushing list (2,560 career rushing yards).

On the team's third drive of the first quarter, Shrader would go 4-for-4 followed by three consecutive runs by Tucker, the last being a four-yard score, his second rushing touchdown of the contest and fourth score on the ground this season. This score gave the Orange a 21-0 advantage with 48 seconds remaining in the first quarter.

Syracuse would once again force Wagner to punt, this time coming after redshirt-sophomore defensive end Steve Linton sacked Wagner sophomore quarterback Ryan Kraft for a loss of 16 yards, resulting in 4th-&-25. This would be the Seahawks' third punt in as many drives.

Tucker appeared to have his third rushing touchdown of the game on the fourth drive of the first half for the Orange, but an illegal block in the back penalty would negate it.

Shrader responded by finding redshirt-freshman wide receiver Umari Hatcher in the back of the end zone a few plays later on third down for a 16-yard score, Shrader's first passing touchdown of the game and ninth of the season, making it 28-0 Syracuse at the 10:42 mark of the second quarter. This score was historic for Hatcher with it being his first collegiate touchdown.

In four drives to start this bout, Shrader was a perfect 11-for-11.

After forcing Wagner to punt for their fourth time on four drives, Syracuse would score on their fifth drive of the first half, when Shrader went to redshirt-senior wide receiver Devaughn Cooper for a 22-yard pass-play that concluded in the end zone to move the Orange out to a 35-0 lead with 7:03 to go before the break.

Syracuse true freshman defensive lineman Denis Jaquez, Jr., would spend some time on the field before coming off on his own wearing a large brace on his right arm during Wagner's fifth drive of the game.

Immediately following Jaquez coming off of the field, Orange sophomore cornerback Duce Chestnut would intercept Kraft, returning the ball 28 yards to paydirt to extend the Orange to a 42-0 advantage with 6:33 left on the second-quarter clock.

Wagner would punt away their fifth-straight possession, and Syracuse would stay perfect, scoring on their sixth-consecutive drive, this being a six-yard rushing touchdown by Tucker, his third of the game and fifth of the season, making it 49-0 with 3:01 to go in the opening half.

The Orange would secure the shutout, taking their 49-0 lead into the locker room.

In the first half, Shrader went a perfect 14-for-14 over seven drives, with the last drive ending on a nine-yard completion to sophomore wide receiver Oronde Gadsden II right before time expired on the half. Shrader had 200 passing yards and two passing touchdowns to go with his one-yard rushing score.

At the break, both Syracuse Head Coach DIno Babers and Wagner Head Coach Tom Masella agreed to shorten each quarter from 15 minutes to 10 minutes, shrinking the third and fourth quarters of this match-up.

The Seahawks would open the second half punting for the sixth-straight time in the game.

Conversely, the Orange would continue their streak of scoring, finding the end zone for the seventh time in eight drives, this coming on the feet of true freshman running back LeQuint Allen for an eight-yard rushing score, the first touchdown of his young collegiate career, bringing the Orange lead to 56-0 with 5:34 remaining in the third quarter.

Wagner punted away their seventh possession of the game, leaving Allen with six seconds left in the third quarter, which he turned into a 90-yard run to the Seahawks' six-yard line, ironically, that brought an end to the third.

The Orange would score on their ninth possession, this time for their first field goal of the game, when redshirt-senior Andre Szmyt connected from 20 yards out to finish the drive that began with the aforementioned 90-yard run by Allen. This score advanced the Orange out to a 59-0 lead with 8:04 left on the game clock.

Syracuse scored on eight of 10 possessions, with the two they did not score on being one that raun out the first-half clock and one that they knely down to run out the second-half clock, securing the shoutout through the second half as well en route to a 59-0 victory that rose them to 5-0 overall, 4-0 at home, and 3-0 against non-conference opponents this season.

Tucker, after carrying the ball once in the beginning of the second half, ended the game with 23 carries for 232 yards (10.1 yards per carry), not losing a single yard on any carry, and had three rushing touchdowns.

His career rushing yardage number is now 2,668 after this match-up.

Shrader concluded the game a perfect 17-for-17 for 238 yards, two passing touchdowns, and no interceptions, to go with his one-yard rushing touchdown.