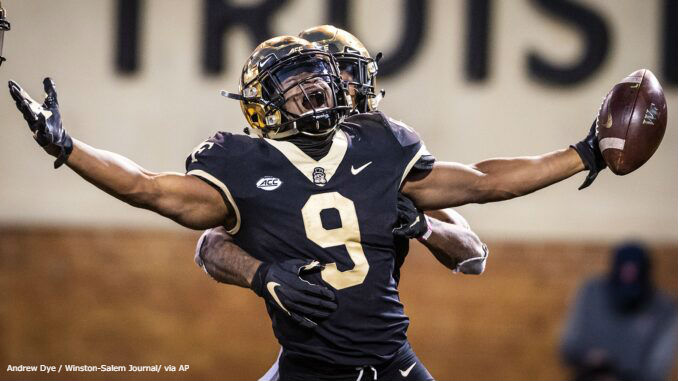 Returning to the Dome after a 47-21 road loss to the #1-ranked Clemson Tigers, the Orange were set against yet another strong rushing attack in the Wake Forest Demon Deacons, who entered the Dome on a three-game winning streak, all at home, with their latest victory coming against the Top-20 ranked Virginia Tech Hokies.

Syracuse also entered this contest without true freshman running back Sean Tucker and junior defensive back Trill Williams, both starters for the Orange.

But a sack by redshirt-junior linebacker Tyrell Richards on third down would move redshirt-sophomore quarterback Sam Hartman and the Demon Deacons back seven yards and force a field-gaol try as opposed to the Orange giving up a redzone touchdown.

Junior kicker Nick Sciba would send the ball through the uprights from 33 yards away to give Wake Forest the first lead of the game, 3-0, at the 10:06 mark of the first quarter, with Wake Forest taking 4:54 off the clock on their opening drive.

On their second drive of the contest, Wake Forest ran the ball seven times for 41 yards to match their first drive exactly, this time getting into the end zone on a one-yard carry up the middle by sophomore running back Kenneth Walker, III, giving the Deacons a 10-0 lead on the road at the 3:37 mark of the first quarter.

Wake Forest held onto the ball for 9:20 of the first quarter, while Syracuse had it for a little over half of that time, at 5:40.

The Orange took their second drive of the game into the opening of the second quarter, and like their first drive, came away with nothing, punting the ball away.

Syracuse true freshman defensive back Rob Hanna went down early in the second quarter and remained knelt on the ground for a few minutes with fifth-year head coach Dino Babers there with him along with team staff. He would come off of the field walking on his own and would immediately go to the medical tent for evaluation.

The Orange would force the Deacons to punt the ball away for the first time in the game, this on the Deacons' third possession where they had the ball for 3:27 but came away with no points.

Syracuse would take eight plays a mere 21 yards on their third drive of the contest, with the drive ending in their third punt on three possessions. The Orange offensive line did nothing to stop pressure from the Deacons on the play that would force the Orange to punt, allowing the Deacons through at the snap, leaving redshirt-senior quarterback Rex Culpepper with no time.

However, Syracuse's defense would show up on 3rd-&-1, knocking Walker back a yard for a loss, resulting in Wake Forest's second punt of the game, and second in a row.

This time around, the Orange offense would capitalize off of the stop by their defense, when Culpepper found Nykeim Johnson for a 21-yard score as Johnson caught the ball just outside the end zone and then held it out over the threshold to make it 10-7 Deacons with 4:17 to go before halftime. Including this completion, Culpepper was 10-for-13 (76.9%) up to this point in the game, with 64 passing yards, one touchdown, and no interceptions.

The defense would continue to impress, as Syracuse forced Wake Forest to punt for the third-straight drive after allowing 10 points to Wake Forest on their first two drives of the match-up.

But the Orange would come away empty-handed on their fifth drive of the game, punting the ball away on a quick three-and-out, not even holding onto the ball for a full minute (3:12 to 2:26 mark).

What was looking like it could be a scoreless quarter for the Deacons courtesy of the Orange went away due to a porous defensive attempt at tackling Walker who stayed with the play en route to a 20-yard touchdown run to raise the Deacons back to a 10-point advantage, this time 17-7 with 1:19 to go before half.

Syracuse would continue to falter, this time on the offensive end, when Culpepper fumbled the ball away on the very first play of their very next drive, giving the ball back to Wake Forest just outside of the Syracuse redzone, at the 26-yard line.

However, what looked like to be a ripe opportunity for the Deacons to take advantage of a reeling Orange team would instead turn into a 4th-&-27 attempt that would fall to the ground on a drive where Orange true freshman defensive back Garrett Williams sacked Hartman for a loss of seven yards and the Deacons lost another 10 yards on a holding penalty shortly before that sack.

The ball hitting the turf off of an attempt by Hartman to get it out before taking another sack was the best thing to happen for Syracuse, keeping their deficit below two touchdowns heading into the locker room.

Syracuse needed a positive to begin the second half after punting the ball four times, fumbling away possession once, and gaining one score in the entire first half.

Instead, the Orange would have a quick 3-&-out on their initial drive of the second half.

Wake Forest would only have three downs themselves in their first drive of the second half, but that is because that is all they needed to get into the end zone, with Hartman completing his attempt to redshirt-junior wide receiver Jaquarii Roberson who would take off for an 80-yard scoring play to give the Deacons a 24-7 lead less than three minutes into the third quarter, at the 12:41 mark.

Culpepper would be intercepted on the very first play of Syracuse's second drive of the third quarter, with true freshman cornerback Gavin Holmes getting in front of the receiver and then out in front of the Orange offense for a 32-yard interception return to make it 31-7 Deacons with 12:32 to go in the quarter, giving the Deacons two touchdowns in the span of nine seconds.

Syracuse would hold onto the ball for 3:32 to follow, but would gain a total of 14 yards on eight plays, punting the ball away for the second time in the third quarter.

Wake Forest would sustain possession for almost six minutes to follow, from the nine-minute mark to 3:09 remaining in the third quarter, taking 10 plays 71 yards, ending in the end zone on Walker's third touchdown of the game, all rushing and this from five yards out, expanding the Deacons' lead out to 31, at 38-7, with 3:09 left in the third quarter.

The Orange responded as they had for much of the game, with a quick 3-&-out, their fourth drive concluding this way thus far in this contest.

Wake Forest would continue to eat more time on the clock on a 13-play drive that only went 41 yards and ended without a score, but it took 6:39 off of the clock from late in the third quarter all the way to the 10:40 mark of the fourth, and final, quarter.

Culpepper threw his second interception of the game on the next Orange drive, their fifth possession of the second half, when sophomore safety Trey Rucker held onto the ball with no one around him.

Following this interception, true freshmen quarterbacks JaCobian Morgan and Dillon Markiewicz warmed up on the sideline, and Morgan would come in to replace Culpepper with 7:28 to go in the contest.

Morgan would go 7-for-7, ending this opportunity with a three-yard pass to sophomore tight end Luke Benson who caught the ball inside of "glory territory" to bring the score to 38-14 Deacons with 3:11 to play. This drive with Morgan under center totaled 80 yards on 10 plays, and the Orange held onto the ball for 4:17, by far their best drive of the game.

But it would come too late, with Syracuse losing 38-14 at home.

This loss gives the Orange a 1-3 record in the newly-renovated Dome, a 1-5 record in the Atlantic Coast Conference (ACC), and a 1-6 record overall.

The Deacons, on the other hand, get their first road win of the season after losing to the N.C. State Wolfpack 45-42 in their second game of the 2020 campaign. Wake Forest is now 3-2 in the ACC and 4-2 overall.

Syracuse had half as many first downs as Wake Forest, 13 to 26, respectively.

In the adsence of staring running back and true freshman Sean Tucker, head coach Dino Babers leaned on redshirt-sophomore running back Cooper Lutz who carried the ball 15 times for 81 yards, an average of 5.4 yards per carry.

The Orange did not allow a 100-yard rusher in this game, but they did give up over 100 rushing yards combined to the Deacons' top-two running backs, with redshirt-junior Christian Beal-Smith gaining 87 yards on 19 carries (4.6 yards per carry) and sophomore Kenneth Walker, III, attaining 79 yards on 16 carries (4.9 yards per carry). All of the rushing touchdowns in the game came on Wake Forest's end, with Walker responsible for all three. Wake Forest used the run to condense the clock, having the ball for 36:14 as compared to Syracuse's time of possession in this game, which was 23:46.

Lutz joined wide receivers Courtney Jackson, a redshirt-freshman, and Anthony Queeley, a redshirt-sophomore, with four catches to lead the Orange, while junior wide receiver Taj Harris reeled in three catches in his return after being held out of the last game against Clemson.

Roberson came in as the receiving leader for the Deacons, and he did not disappoint, accumulating 130 yards on seven catches, including one for a touchdown.

The Orange struggled once again on third down, going 3-for-11, while the Deacons were successful on third down against the Orange 50% of the time, going 9-for-18.