Liberty Runs Syracuse Out of Their Own Building 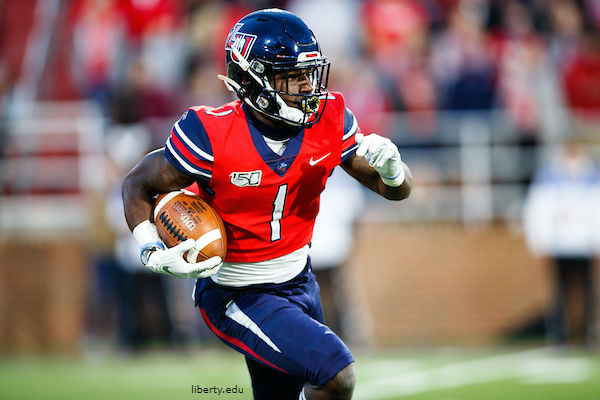 The Syracuse Orange entered this their third home game inside of the new-look Dome in need of some momentum with the Clemson Tigers on the horizon.

Liberty, on the other hand, came into the Dome with nothing to lose, and a 4-0 start.

The Liberty Flames fell to the Syracuse Orange last season at home, 24-0, but in that contest, the Orange relied on three players that are not on the roster this season, those being Moe Neal, Abdul Adams, and Jarveon Howard, who all ran for a touchdown in that game.

Liberty intercepted Syracuse quarterback Tommy DeVito twice in that game, and DeVito did not throw a single touchdown.

This time around, the scenery is different on the field, but not just because of the new-look Dome. Redshirt-senior Rex Culpepper has taken over for an injured DeVito and true freshman Sean Tucker is now the lead back for the Orange, who are in need of a win at 1-3 on the season.

Syracuse began the game running the ball on their first series, with Tucker taking the first play of the game three yards and the second rush six yards. On 3rd-&-1 though, the Orange did not hand it to Tucker for the lone yard. Instead, they attempted a pass and the possession ended in a three-and-out.

Redshirt-junior quarterback Malik Willis attempted two passes and redshirt-senior running back Peytton Pickett carried the ball once for no gain on Liberty's own three-and-out on their first drive of the game as well.

The Orange offense seemed to wake up on their second drive, taking a nine-play drive into the end zone when Culpepper found junior wide receiver Taj Harris for a 17-yard touchdown, giving Syracuse the first lead of the game, 7-0, at the 8:32 mark of the first half.

Tucker's 11-yard run got the Orange to the Flames' 17-yard line on the play right before Culpepper found Harris for the score.

Liberty took three players no where in their first drive, as aforementioned. On their second drive, it only took them two plays to attain their first points of the contest. After Willis' pass fell incomplete, sophomore running back Shedro Louis found a lane and took off. Syracuse defenders took bad angles on Louis and he made them pay, turning on the turbo jets en route to a 75-yard touchdown run, equalizing the game at 7-7 just 18 seconds after the Orange scored, at the 8:14 mark.

Culpepper would go 2-for-5 on Syracuse's second drive of the game and would receive pressure that he tried to get his foot out of on third down, but Liberty held on and took him to the ground for a 16-yard loss on a sack that led to a punt by the Orange.

The Flames ran a near-perfect drive to follow this punt, with Willis going 4-for-4 and rushing the ball forward seven times, ending with a quarterback keeper by Willis for a four-yard score to give Liberty their first lead of the game, 14-7, right before the end of the first quarter, with 28 seconds remaining.

Early in the second half, Syracuse would punt the ball away, but they would catch a break when redshirt-freshman Demario Douglas fumbled the attempted return and sophomore wide receiver Isaiah Jones out of Cocoa, Florida, recovered the ball for the Orange on the Flames' 14-yard line.

Syracuse's offense, however, would continue their theme of not capitalizing on turnovers this season when they would fail to gain a first down on a 4th-&-1 rush by Tucker, turning the ball over on downs at the Liberty five-yard line.

A sack by true freshman linebacker Marlowe Wax would bail out the Orange, forcing the Flames' second three-and-out drive of the game.

Syracuse went "three-and-in" on the drive that ensued, their sixth drive of the first half, scoring on their third play when Culpepper found senior tight end Aaron Hackett for a 12-yard pass play, tying the game at 14-apiece with 9:21 left on the second-quarter clock. The Orange ran the ball on the other two plays of this drive, with Tucker gaining 20 yards and four yards, respectively.

However, just as they did in the first quarter, Liberty responded immediately, scoring on their next drive. With Syracuse struggling to stop the run, Liberty went right back to it, with Willis carrying the ball on the first play of the drive for 17 yards and the second play for four yards, followed by Louis breaking out and showing his speed once again, this time for a 57-yard score, raising the Flames to a 21-14 advantage with 7:49 to go before halftime.

The Orange would have no response on offense, punting on a three-and-out drive that saw intentional grounding called on Culpepper on third down.

Willis went 2-for-3 on his pass attempts and Liberty carried the ball as a team 10 times on their next drive, but Willis would fumble near the Syracuse end zone, with the fumble being forced and recovered by sophomore linebacker Mikel Jones.

The Flames did eat almost six minutes off the clock on this drive, though, giving the Orange 29 seconds to work with before half. Syracuse would run the ball and the time out, gaining no points off of this turnover by Liberty.

Essentially, losing the ball may have cost them another score, but it did not result in them giving up any points to Syracuse, as the teams went into the half locked at 21-14 Liberty.

Liberty came into the second half with their Flames still burning bright, scoring on their opening drive of the half on a 36-yard toss from Willis to senior wide receiver DJ Stubbs on a play where Willis saw Stubbs heading toward the end zone and let it fly, with Stubbs catching the ball like it was practice, moving Liberty out to a 28-14 lead with 12:55 on the third-quarter clock.

The Orange were faced with a 4th-&-2 situation on their first drive of the second half, and Culpepper found Nykeim Johnson for a four-yard gain to keep the drive alive. Culpepper would go 4-for-7 on ths drive but Syracuse would not get past the Liberty 48-yard line, punting the ball away.

Syracuse's defense would force Liberty to punt it back to their offense on the next drive, but the Orange offense would give the ball right back when Culpepper let the ball hang out closer to the Flames than his intended receiver, Harris, and sophomore cornerback Chris Megginson would make the most of this opportunity, intercepting Culpepper on the Flames' 41-yard line.

Liberty would run yet another almost perfection  possession, with Willis going 4-for-4 and Pickett would head into the end zone on a 16-yard carry that spread the Flames out to a 35-14 lead on the Orange with 2:58 left in the third quarter.

On Syracuse's third drive of the second half, Culpepper launched to Harris with a beautiful ball that came down into the hands of Harris... then hit the ground. This drop was the difference between the Orange being close to the Flames' 10-yard and what the drive became, which was a punt back to the Flames.

The quarter would come to a close seeing Syracuse down by 21 at home to an independent Liberty.

Sophomore linebacker Lee Kpogba recorded his first collegiate sack when he took down Willis on the Flames' next drive for a loss of five yards; Liberty would end up punting on that drive.

Another first happened for the Orange on their following offensive possession, when redshirt-sophomore wide receiver Anthony Queeley caught his first touchdown pass of his college career on a 21-yard play that made it 35-21 Flames with 8:45 to play in the contest.

Syracuse tried an onside kick to follow, but did not convert it, with redshirt-junior wide receiver Brody Brumm securing the ball for Liberty on the Syracuse 46-yard line.

Orange head coach Dino Babers took his final timeout of the half with 5:24 to go.

The Flames came out of the timeout making a 20-yard field goal by senior kicker Alex Barbir to move them out to a 17-point advantage, 38-21, with 5:20 to go in the game.

On the next opportunity for the Orange offense, Culpepper attempted a pass over the middle to redshirt-freshman wide receiver Courtney Jackson, who had the ball go through his hands. That miss would bring up 4th-&-10 where Culpepper's short pass attempt would head out-of-bounds and Syracuse would turn the ball over on downs on their own 49-yard line with 4:46 to play.

With a 4th-&-1 situation inside three minutes, the Orange defense had a chance to make a stop, and did not, as Willis kept the ball for a five-yard gain to the Syracuse 35-yard line and a first down.

Liberty followed this run by Willis by taking three knees and securing their road win over Syracuse, 38-21, to improve to 5-0 on the season.

The Orange continue to roll downhill, now 1-4 overall, 0-1 against non-conference and 1-3 in the Atlantic Coast Conference (ACC).

Syracuse allowed over 200 yards more to Liberty on offense than they achieved themselves, despite having almost exactly the same amount of plays: The Orange went 308 yards on 67 plays while the Flames amounted 520 yards on 68 plays.

Culpepper ended the game 19-for-40 (47.5%), with receivers adding to the lowering of this percentage due to dropped balls. He passed for more yards than Willis, 211 to 182.

The glaring difference offensively was the Orange allowing 338 rushing yards by the Flames while gaining under 100 themselves, at 97.

They held onto the ball almost the same amount of time, 30:29 for Liberty to 29:31 for Syracuse, but Liberty simply did more with their time.