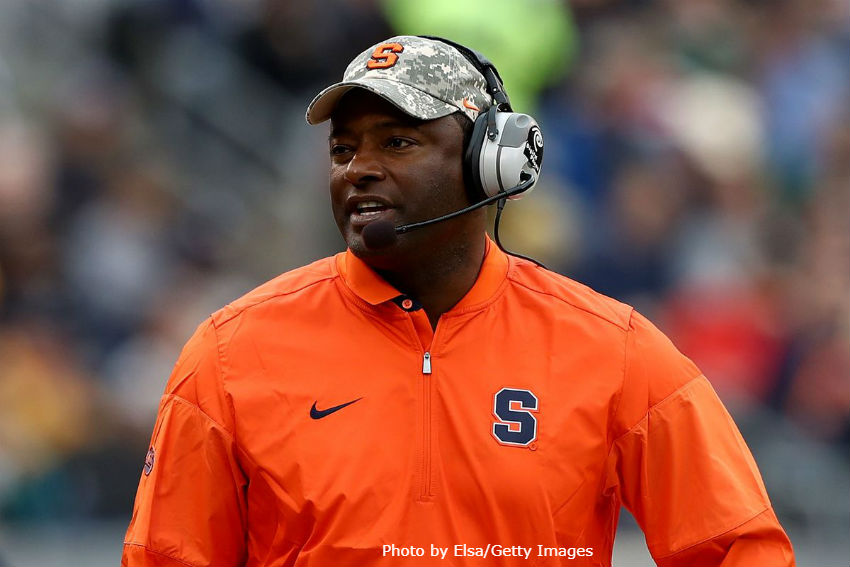 Syracuse Orange head football coach Dino Babers, embarking on his fifth season overseeing the orange and blue, gave some of his time to a media zoom call following Syracuse student-athletes sitting out a few scheduled practices

When I had the opportunity to speak with Babers following these two instances of halted practice, he shared, "I think they've handled it well. They basically said certain things and we dropped the ball on the one thing and they were right."

"And we froze practice until we cleaned it up."

As far as what that "one thing" was that Syracuse dropped the ball on, Babers offered, "The big thing was we had gone from we were testing every two weeks and the players asked...we had a meeting not in our meeting room because we wanted to have social-distancing and we had a meeting in our very spacious indoor with everybody separated...and I had the microphone and they asked me a question that I didn't have the technical answer to."

"Then, we came back and he checked with somebody and they said, 'No, we can't do that,' and it never got back to me that we couldn't do that," Babers went on to say.

"I actually forgot, too, because we were under a strict two-week boom. boom. boom. And what they asked us to do was go to one week, so then we went to one week and when the date hit, we didn't test. And they (the players) called us on it, and rightfully so."

"The facts are the facts," Babers remarked. "We didn't do it. We had gone, I would say six weeks without a positive, so we had gone a long period of time and we were in camp mode. So they (the players) went and they called us on it and they were right. We stopped practice, and until we got everybody tested clean, we weren't gonna start practice again because that's what we agreed to."

Adjusting to everything has been difficult for us all, as things can seem to change sometimes daily or weekly. "There's never been a year like this, so forget about those old playbooks. Forget about the old schedules," said Babers. "This is straight heartbreak ridge. If you do not adjust and improvise, you are gonna get left behind in 2020."

"You're gonna have to flexible to survive this pandemic and survive this year... but, you need to also be rooted, because if you don't stand for something, you'll fall for everything."

Since the two stoppages in practice here in August, Babers expressed, "Practice has been running really well. The guys have been active. Obviously, they've been doing their part when they're out there and hopefully we're gonna continue to have a lot more practices like that."

When addressing my question on the climate of college football right now with some conferences trying to play and others either not playing at all or postponing to Spring 2021, Babers stated, "I can't talk for everyone else. I can only speak for Syracuse...I feel like the atmosphere here and the safety things that we're trying to get done at Syracuse for our players are really, really good."

Babers referenced the number 1,450 tests in connection to what Syracuse University has done so far for COVID-19 testing for the Orange football team.

"I think we have the right format. A lot of other schools are having success with their format as well. We just hope that all this stuff continues as students start to come back to campus, and ours are starting to come back and it's good to see 'em."

"All of our students, as far as I know, are 14-day quarantine before they're even allowed to go into their dorm rooms, so we're doing a lot of extreme stuff here at Syracuse to try to keep the learning environment and the student-athletes all safe," said Babers. "We really feel that...we may be a little bias, but we feel like they may be a little bit safer here on campus."

"We feel like we're doing a good job," Babers expressed. "We're gonna cross T's and dot I's and hopefully not stub our toe anymore and hopefully keep continuing to work toward the start of the ACC season."

Babers is not only hoping and relying on himself, his staff, and the football student-athletes to do the right thing, he is relying on the entire student body and surrounding community. "That's gonna be the real key," Babers noted.

"What they do at night reflects what's going to happen to them during the day."

He knows that he, as well as anyone else, cannot be up all night checking up on everyone. "I can't stay up that many hours. I go to bed early at 9:30[pm]... I really believe that everybody's gonna be good during the day, but what are they gonna be doing during the night?"

Put simply, if you want football, or life to return to any type of what we are used to, we all have to do our part.

We have been through many things in history.

And when it comes to safety, it is not good enough to simply take care of yourself. We must also be cognizant of what is going on around us and that it takes a community of people to tear something down, or to build something up.