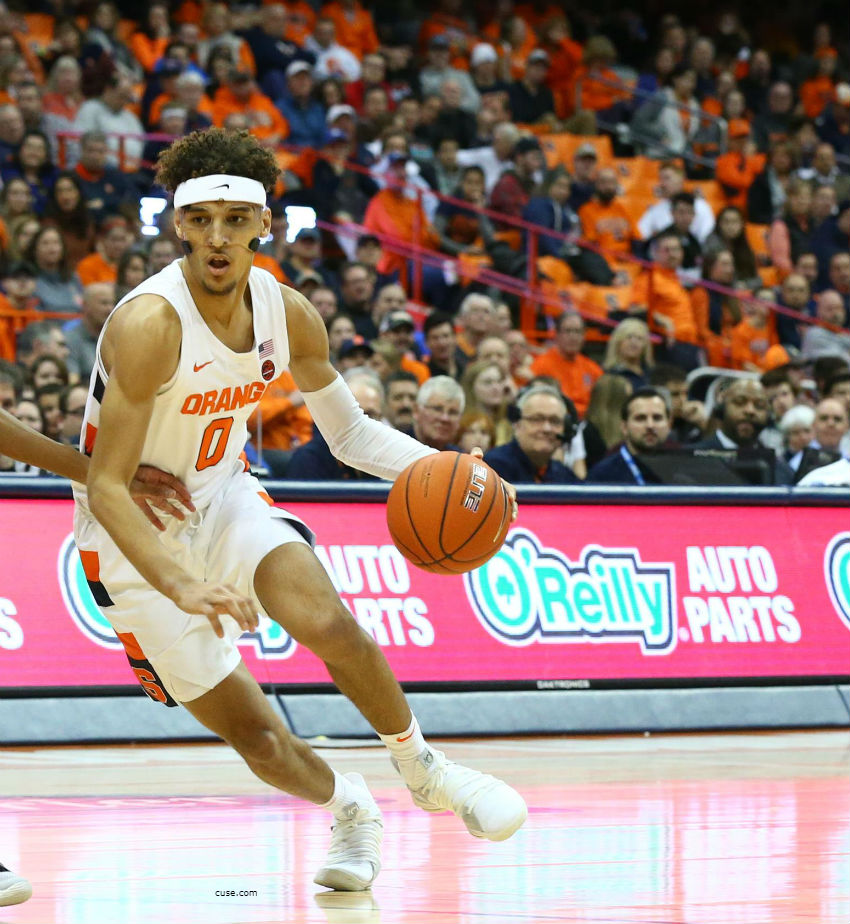 The Syracuse Orange entered their 15th home game of the 2019-20 campaign in fifth place in the Atlantic Coast Conference (ACC) standings at 6-5, playing a Wake Forest Demon Deacons' team that was 14th out of 15 ACC schools in the conference standings, with a 3-9 record.

Junior forward Marek Dolezaj got Syracuse on the board first when he was successful on his layup following his own defensive rebound.

Wake Forest would take their first lead of the game shortly after when senior guard Brandon Childress broke a tie with his jumper at the 16:23 mark of the first half.

The Orange would reclaim the lead when sophomore guard Buddy Boeheim connected from long distance to get the Orange ahead by a score of 5-4.

Syracuse would make three more deep shots from 14:48 to the 12:17 mark, two more by Boeheim followed by one by redshirt-junior forward Elijah Hughes, expanding the Orange lead to 16-4.

From the 10:20 mark to 7:50 remaining in the first half, Wake Forest would knock down four straight shots, including two field goals from beyond the arc, moving the Demon Deacons to a single-digit deficit, down 25-16.

Dolezaj fought hard inside with around 5:30 left in the opening half, grabbing an offensive rebound off of his own shot that eventually led to points for the Orange when Hughes fed true freshman guard Joe Girard, III, who connected on a jump shot, placing the Orange back ahead by double-digits, 30-19.

Fellow true freshman, forward Quincy Guerrier, attacked Wake Forest inside, going for the high-percentage shots and getting contact to at least get a trip to the charity stripe. The points that followed Girard's aforementioned jumper came from Guerrier with an old-fashioned three-point play followed by going 2-for-2 at the line to bring the score to 35-25 Syracuse.

Guerrier would, however, come out of the game with 2:33 remaining in the first half, after committing a foul of his own, his third of the game.

The Demon Deacons would finish the half on a 5-3 run that would make it 38-30 Orange at the break.

Syracuse would begin the second half on an 8-0 run, started by two free throws by Hughes and then Boeheim making the first field goal for either side in the second half, this coming at the 19:03 mark.

Wake Forest responded with a 10-0 run that would cut Syracuse's lead to two possessions, 46-40, with 16:29 to play, after junior center Olivier Sarr dunked it home. Junior guard Chaundee Brown began the run with his jumper, with two three-pointers from redshirt-senior guard Andrien White coming after Brown and before Sarr's dunk.

Hughes and Dolezaj would each go 2-for-2 from the line in response, moving the Orange back out to a double-digit lead, 50-39.

Boeheim would answer the Demon Deacons on back-to-back possessions with jumpers to keep Syracuse up by double-figures, with a little over 14 minutes to play.

Sidibe would commit the foul that put Sarr on the line with 8:40 remaining. That would end up being Sidibe's fifth foul of the match-up, resulting in him being done for the night just nine seconds after teammate Guerrier had fouled out with 8:49 to go.

After missing three out of four free throws, including both front ends of 1-&-1 opportunities, the Orange found themselves up by a mere two points, 63-61.

Dolezaj would be called for his fourth personal foul with 6:55 to play and Sarr would go 2-for-2 at the line to tie the game at 63 apiece.

The foul by Dolezaj was a hook-and-hold, so Wake Forest was given possession to follow the free throws and Sarr would come up big once again, this time on a layup after an offensive rebound by teammate sophomore forward Isaiah Mucius. As a result, the Demon Deacons would take their first lead since 4-2, ending the run that the Orange had from the 15:27 mark of the first half.

Dolezaj would receive a second technical for back-to-back technical fouls, fouling out with 5:42 to go in the contest. Wake Forest made the most of the technical foul situations, turning a 63-61 deficit into a 69-65 lead.

Hughes would make both of his free throws and true freshman center Jesse Edwards would go 1-for-2 to get Syracuse within one, 69-68, with under four minutes on the game clock.

White would get the lead right back, going 1-for-2 himself from the line.

But Boeheim would connect on a layup in transition after a steal by Girard to move the Orange back ahead, 71-70.

A bad bobble by the Demon Deacons inside led to another steal by the Orange on the very next possession, this by Boeheim off of freshman forward Ismael Massoud.

Hughes would make both of his free throws with 32.3 seconds to play, extending Syracuse out to a 73-70 lead.

Massoud would reply with a three immediately after, tying the game at 73, and turning the game clock off.

Hughes would miss a three on the other end and true freshman guard Brycen Goodine would grab the offensive rebound underneath and put it back with under four seconds on the clock.

The ball would rattle around and drop in with 1.5 seconds to go, giving Syracuse a 75-73 advantage and the eventual win.

Boeheim, Hughes, and Guerrier all ended in double-figures for the Orange, with 23, 20, and 13, respectively.

Sarr and Brown closed the game in double-figures for the Demon Deacons, with 15 and 14, respectively.

There are a mere three teams in the ACC with at least 10 conference wins so far this season (Louisville, Duke, and Florida State), with Syracuse and Virginia closest from there, both with seven conference victories and the same record in the ACC, at 7-5.

Wake Forest joins the Miami Hurricanes, who have the same record of 3-10, at the bottom of the ACC.