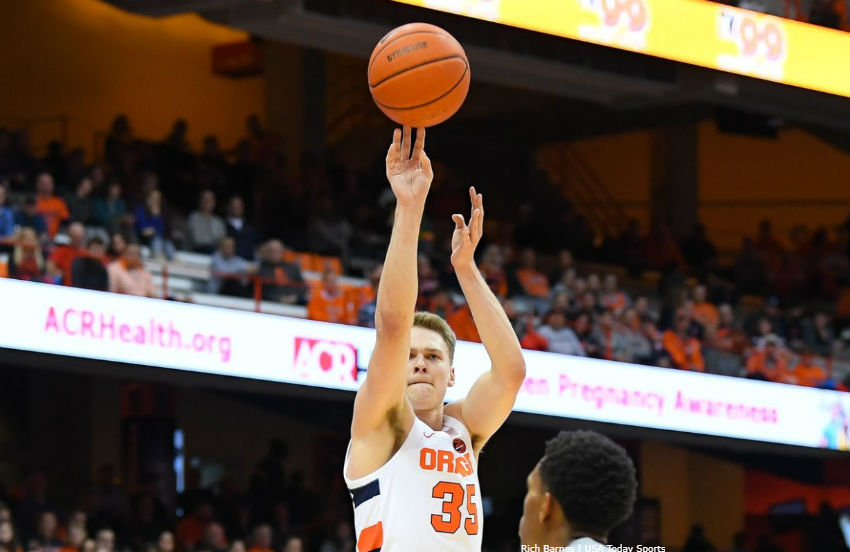 The Syracuse Orange men's basketball team rode a four-game winning streak into the Dome when they welcomed their long-time rival, the Pittsburgh Panthers, to Central New York.

Pittsburgh came in with an overall record of 13-6 as well as a .500 placement in the Atlantic Coast Conference (ACC) at 4-4.

The Orange would begin the game on a 5-0 run, coming off of a field goal by junior forward Marek Dolezaj and an old-fashioned three-point play by sophomore guard Buddy Boeheim.

Pittsburgh's first point on the board would come from a 1-for-2 outing at the line from junior forward/center Terrell Brown at the 16:45 mark of the first half.

A dunk by Brown at the 15:05 mark would bring the first tie of the game as the Panthers got even with the Orange at 5-5.

Boeheim responded immediately with a jumper to keep the lead on Syracuse's side, where the lead would remain the entire first half, as Syracuse never trailed in the opening 20-minute period.

Both true freshman forward Quincy Guerrier and junior forward/center Bourama Sidibe got after the offensive glass and Sidibe came up with it, cleaning up at the rim as he stretched out to lay it in off the glass to elevate the Orange to a 20-point advatange, 30-10.

The Panthers would respond with an 11-0 run that would bring their deficit to nine, 30-21.

With under 30 seconds in the opening half, true freshman guard Joe Girard, III, would break the offensive silence with a layup, advancing Syracuse back out to a double-digit lead, at 32-21. This basket would end a drought that lasted over four minutes for the Orange, from the 4:51 mark to 34 seconds remaining, and the Orange would take this 11-point lead into the break.

Boeheim would end the first half with 18 points.

His first points of the second half came right by the 13-minute mark when he made his fourth deep shot of the game, moving him to over 20 points for the contest, at 21.

A foul by Pittsburgh sophomore guard Xavier Johnson put Syracuse in the bonus, guaranteeing them a trip to the line for the final 12:35 no matter what.

True freshman forward Quincy Guerrier would work inside by the midpoint of the second half, getting two buckets that would aid the Orange in moving out to a 51-35 advantage.

Girard would make his first three of the game on a quick release at the 7:03 mark of the second half. He was 0-for-6 from beyond the arc in this game prior to that bucket.

Shortly after, a 14-3 run by Pittsburgh would shrink the Syracuse lead to a mere three points, at 59-56, with under three minutes to play.

While the Panthers were making a run, the Orange went 1-for-4 from the charity stripe and attempted only three shots, going 1-for-3, from the 7:03 mark to 3:04 remaining.

Layups by redshirt-junior forward Elijah Hughes and Dolezaj gave some separation for the Orange, at 63-58.

Right before the one-minute mark, Dolezaj jumped the passing lane and took the ball away from the Panthers.

But Syracuse would fail to jump the passing lane again when Xavier Johnson sent the ball to the rim from the top of the key, finding freshman guard/forward Justin Champagne for an easy two to make it 63-60 Syracuse with 32.5 seconds to go in the contest.

Dolezaj would come up big yet again when he launched the in-bounds pass to Hughes who slammed it home one-handed on the other end.

Guerrier was called for his fourth foul of the game with 18.8 seconds to play and Johnson would go 1-for-2 at the line to bring the score to 65-61 Syracuse.

Dolezaj would go 2-for-2 at the charity stripe to get the Orange out to a 67-61 lead and Girard would steal the next Panthers' possession away and make two free throws of his won to give the Orange a 69-61 victory.

With the win, Syracuse has now won five games straight en route to a 6-3 ACC record, which also brings them to 13-7 overall.

Boeheim led all Orange with 21 points, followed by Dolezaj's 17. Hughes and Guerrier each ended with 10. Hughes' first points of the game came from a jumper at the 17:30 mark of the second half, with all 10 of his points coming in the second half.

The Panthers had two scorers in double-figures, Champagne with 14 and Brown with 11.