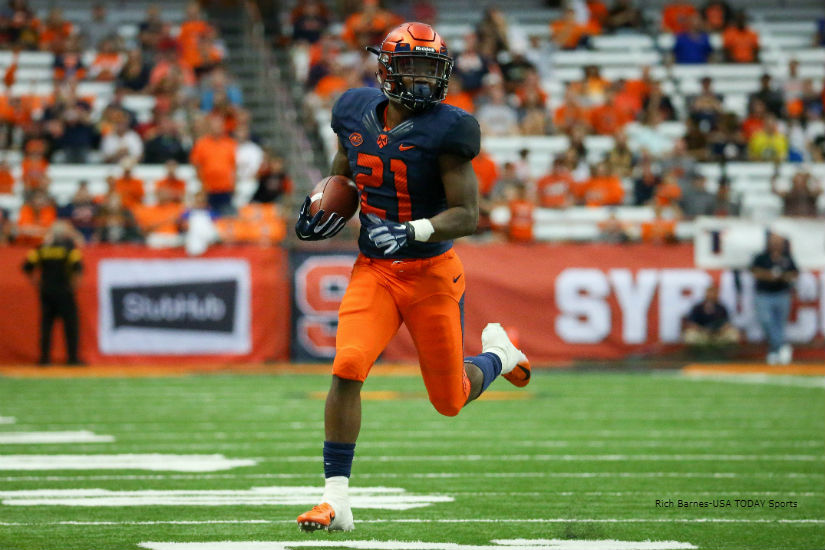 The Syracuse Orange and Wake Forest Demon Deacons came into the Dome on two totally different ends of the spectrum.

Syracuse was 4-7 with no postseason to look forward to.

Wake Forest was 8-3, with a winning record in the Atlantic Coast Conference (ACC) at 4-3, and a bowl game coming on the horizon.

The Orange received the ball first after the Demon Deacons won the coin toss and deferred. Syracuse would accomplish little on their opening drive, with redshirt-senior punter Sterling Hofrichter punting the ball away after redshirt-senior quarterback Clayton Welch, who was named the starter for this game, was sacked for a loss of two by redshirt-junior linebacker Ja'Cquez Williams to set up fourth down on a quick three-and-out.

Wake Forest would begin the game with six rush attempts and a 2-for-3 start from redshirt-junior quarterback Jamie Newman that all led to a 43-yard field goal by sophomore kicker Nick Sciba to give the Demon Deacons an early lead, 3-0, at the 10:02 mark of the first quarter.

Syracuse senior running back Moe Neal would rush up the middle for back-to-back first downs, of 15 and 12 yards respectively, on the team's second drive of the contest.

On 3rd-&-4, Welch threw to redshirt-junior wide receiver Trishton Jackson who reeled it in and pushed for the first down at the 14-yard line of Wake Forest.

Two plays later, sophomore wide receiver Taj Harris spun twice, lowered his head, and pushed forward, advancing when the Demon Deacons went for the strip, breaking free for what looked to be a 14-yard touchdown after his reception.

But the officials reviewed the play and ruled that Harris stepped out at the two-yard line, giving Syracuse a first down instead of a touchdown.

On the very next play, sophomore running back Jarveon Howard ran forward but the play was called back on a holding penalty, rolling the Orange back to the Demon Deacons' 12-yard line.

Welch responded immediately, sending a pass to Trishton Jackson who caught the ball by the goal-line and turned away from his defender and into the end zone to give Syracuse their first lead of the game, 7-3, at the 6:27 mark of the first quarter.

Immediately following the touchdown, sophomore free safety Andre Cisco would intercept redshirt-junior quarterback Jamie Newman and the Orange would have the ball back on offense, this time at the Deacons' 28-yard line.

However, the excitement on this drive would be short-lived after Welch saw his receiver and undershot the pass, with redshirt-junior defensive lineman Manny Walker intercepting Welch, but Welch did chase down Walker and take him down after throwing the interception.

Syracuse's defense would strike again and force another turnover by Newman when senior linebacker Lakiem Williams would force Newman to fumble on his quarterback keeper and Cisco would recover the ball at the Wake Forest 13-yard line. This drive, the third of the day for the Orange, would end with a 24-yard field goal by redshirt-sophomore Andre Szmyt to move the Orange ahead 10-3 with 2:19 remaining in the first quarter.

The Orange defense would open the second quarter by allowing nothing to the Deacons on a 4th-&-3 pass attempt, gaining the ball on their own 44-yard line after a Deacons' turnover on downs.

Welch would throw three straight completions on the following offensive drive for Syracuse, the final a pass to true freshman tight end Luke Benson, who was wide open, that resulted in a 29-yard scoring play to move the Orange ahead 17-3 just 1:42 into the second quarter (13:18 mark).

With the touchdown reception, Benson had attained a score in half of the games he played in this season (3 of 6), those scores coming versus the Holy Cross Crusaders, visiting the Duke Blue Devils, and in this game versus Wake Forest.

Syracuse's next drive would go no further than their own 12-yard line on a three-and-out performance.

The Orange defense would send an onslaught of pressure toward Newman, sacking him, but an illegal hands-to-the-face penalty would take the Deacons away from a fourth-down situation and, instead, give them a new set of downs at their own 48-yard line.

Sophomore quarterback Sam Hartman would come in later in this drive and send a strike to redshirt-senior wide receiver Kendall Hinton, who did not hold on, and Wake Forest would punt the ball away.

Syracuse would punt it right back less than two minutes later, with Wake Forest gaining possession at the 6:37 mark of the second quarter and gaining a few extra yards as a result of a dead-ball penalty on Lakiem Williams during the return, putting Wake Forest on the Syracuse 44-yard line.

Hartman went over the middle to Hinton on third down once again, but this time Hinton held on, attaining the first down, this moving the Deacons to the Orange nine-yard line.

The Syracuse defense, with Wake Forest at their seven-yard line, would intercept the ball in the end zone, when redshirt-sophomore cornerback Ifeatu Melifonwu fought the ball away from his adversary, giving Syracuse possession with 4:23 to go before half.

This interception by the Orange defense gave the team an interception versus both quarterbacks seen in this game.

Alas, Syracuse would not come away with any points, punting the ball back to the Wake Forest 25-yard line with 2:41 left on the first-half clock.

On the fourth play of the Deacons' next drive, Hartman would get intercepted for the second time, this coming when the ball went through the out-streched hands of his intended receiver and into the hands of redshirt-senior cornerback Christopher Fredrick.

However, Syracuse's fourth created turnover of the contest would end with a turnover from their own offense when Welch forced a pass with pressure coming and junior cornerback Ja'Sir Taylor would intercept the ball at his own 24-yard line.

Wake Forest would create points off of this turnover when Sciba made his second field goal of the game, this from 45 yards away, at the close of the first half.

The tale of the first half was that the Orange defense brought about four turnovers in the first half (3 interceptions, 1 fumble), but the offense only came away with three points.

Nevertheless, the turnovers aided the Orange in taking a 17-6 lead into the break.

Syracuse began the second half with a 15-yard personal foul penalty on Wake Forest's first play of the half on a drive that would conclude with Wake Forest's first touchdown of the game, a 19-yard run by senior running back Cade Carney, that brought the score to 17-13 Syracuse just 1:49 into the half (13:11).

On the first drive of the second half for the Orange, Welch would take a hit that would result in a personal foul on the Deacons and redshirt-sophomore quarterback Tommy DeVito came in.

DeVito, playing in his first drive of the game, would find junior wide receiver Nykeim Johnson for an 18-yard pass play that would end at the Wake Forest two-yard line.

Welch would come back in on 3rd-&-1 for the Orange.

This drive would end with a 20-yard field goal after Syracuse failed to get the ball across the goal-line on three consecutive runs inside the Wake Forest three-yard line by sophomore running back Jarveon Howard.

But the game would be even just 12 seconds later, at the 5:45 mark, when Hartman completed a pass on the first play of this drive to freshman wide receiver Donavon Greene that Greene would take in between defenders and then outrun the entire defense en route to a 75-yard touchdown.

With momentum out of their hands, the Orange would respond by punting the ball away.

The Deacons would take a little over two minutes off of the third-quarter clock before punting it back to the Orange with 1:54 left in the quarter.

On 3rd-&-8, Welch went out to Neal by the line of scrimmage. Neal turned nothing into something. He caught the ball, came upfield diagonally from right to left, saw traffic, changed course, and went left to right for a first down on what looked like a play that would be stopped well-short of the first-down marker. This 19-yard gain moved Syracuse ahead to their own 47-yard line to begin the fourth quarter on 1st-&-10.

But Howard would fumble on that same drive, forced by redshirt-junior nose tackle Sulaiman Kamara and would be recovered by freshman free safety Trey Rucker at his own 39-yard line.

Sciba, who was 23-for-23 on field-goal attempts this season going into this drive, missed his 53-yard try at the end of this possession, marking his first miss of the season and keeping this game tied at 20 apiece.

From 13 yards out, Neal would take the carry and head in untouched for his seventh rushing touchdown of this season and 14th career rushing touchdown. This score gave the lead back to the Orange, 27-20, with 8:29 remaining on the game clock.

Wake Forest would respond by taking over four minutes off of the game clock on a scoring drive that ended on a pass from Hartman to Hinton on 4th-&-2, tying the game at 27 with 4:12 to play.

On the following kick return, junior wide receiver Nykeim Johnson would be thrown out of the game for contacting an official.

Welch dropped back on 3rd-&-10 and found junior tight end Aaron Hackett for a first down on an 11-yard completion to keep the drive alive. He would send the ball to Harris on the very next play, which would end in a 33-yard gain and yet another first down.

Neal would carry the ball up the middle for a nine-yard gain to the Deacons' 25-yard line.

The Orange, however, would move back 10 yards on a holding penalty called on junior fullback/tight end Chris Elmore to the Deacons' 35-yard line.

With 44 seconds remaining, Szmyt would connect on a 49-yard field goal to move the Orange out to a 30-27 lead.

Wake Forest moved the ball so well and got to the sidelines multiple times to the point where they did not have to use their final timeout until four seconds were remaining. Sciba lined up from 43 yards away and sent it through the uprights, forcing overtime at 30 apiece.

Receiving the ball first in overtime, Syracuse amounted nothing on offense, hoping in the leg of Szmyt, who made it from 40 yards out to give the Orange a 33-30 lead, forcing the Deacons to have to score.

A field goal would keep the game going.

A touchdown or a turnover by Wake Forest would bring the game to its conclusion.

Hartman would keep the ball himself and rush for a 12-yard gain and a first down to the Syracuse 10-yard line.

He would send the ball to one of his key targets, Hinton, on what looked like a short gain, but sophomore defensive back Trill Williams crept up and stole the ball out of Hinton's hands, taking it all the way downfield for a defensive score.

Syracuse wins on this all-or-nothing attempt by Trill Williams, closing out the game after one overtime period, 39-30.

With the loss, the Deacons close out the regular season at 8-4 overall and 4-4 in ACC play, with a bowl game coming.