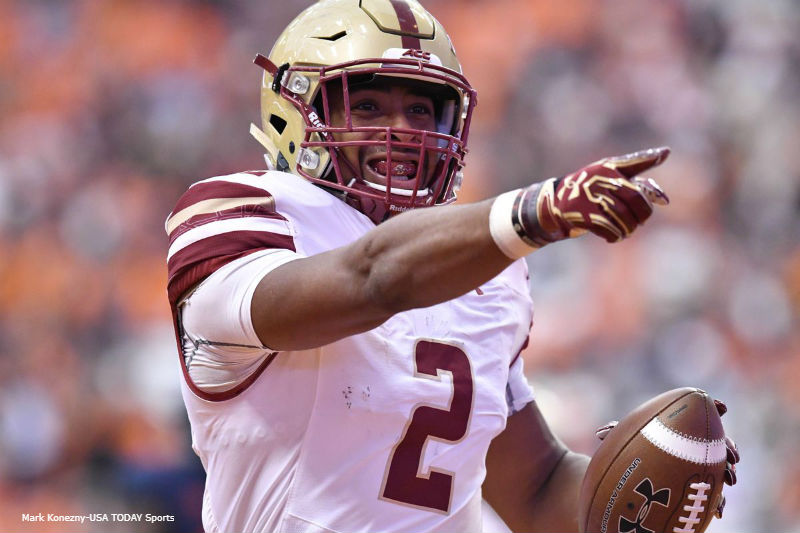 The Syracuse Orange and Boston College Eagles' rivalry rolled into this current season as the adversaries met on the field of the Carrier Dome for their 53rd contest all-time.

Syracuse came in owning the overall advantage 32-20, winning the last match-up, which was on the road in Chestnut Hill, Massachusetts last season, 42-21.

But the game was already almost exactly this score merely halfway through, with Boston College commanding this time around, 44-20.

Graduate kicker Aaron Boumerhi got things started with a 21-yard field goal for the Eagles at the 10:37 mark of the first quarter.

The Orange would respond by scoring on their first drive of the game, when redshirt-sophomore quarterback Tommy DeVito found junior tight end Aaron Hackett from nine yards out. This came on a drive where DeVito faked a hand-off, kept the ball for himself, and then passed out to senior wide receiver Sean Riley on a well-executed trick play. With this score, Syracuse took the lead 7-3 at the 8:07 mark of the opening quarter.

However, the lead was short-lived, with Boston College scoring on their next drive, when sophomore running back David Bailey carried the ball 29 yards to the house to move the Eagles ahead 10-7 with 6:19 left in the first quarter.

Syracuse would tie the game at the 1:43 mark on redshirt-sophomore kicker Andre Szmyt's first field goal of the contest, this from 47 yards away, to make it 10-10.

On Boston College's first play of their next drive, Bailey would fumble, forced by sophomore nickelback Trill Williams and Syracuse would recover the ball thanks to senior defensive tackle Kenneth "K.J." Ruff on the Boston College 29-yard line.

The Orange would score off of this created turnover, with redshirt-junior wide receiver Trishton Jackson getting the 26-yard touchdown off of a pass by DeVito on the third play of the drive, giving Syracuse the lead, 17-10, with 29 seconds remaining in the first quarter.

But, despite beginning the second quarter ahead 17-10, the Orange would be behind 44-20 at the half after being out-scored 34-3 in the quarter.

The Eagles would score on all five of their second-quarter drives.

On the third play of their drive that continued into the second quarter, Boston College scored on a 64-pass play from redshirt-sophomore quarterback Dennis Grosel to redshirt-junior wide receiver Kobay White, tying the contest at 17 apiece just nine seconds into the quarter.

The Eagles would respond with five-straight runs followed by a pass from Grosel to freshman wide receiver Zay Flowers for a 50-yard score, elevating the Eagles ahead of the Orange at 24-20.

It took junior running back A.J. Dillon just two carries to get into the Syracuse end zone on the following drive, going 51 yards in an open field on the second carry of the drive, giving Boston College a 31-20 advantage at the 5:31 mark of the second quarter.

The next drive by the Eagles would be even shorter.

Shorter than two plays, you say?

Bailey went 74 yards on his carry from his own 26-yard line to the Orange end zone, moving the Eagles up to a 37-20 lead after a botched extra-point attempt.

The final score of the second quarter for Boston College came on a drive that began with six-straight runs and followed with redshirt-junior tight end Isaiah Miranda scoring on a four-yard pass-play, bringing the score to the aforementioned 44-20 tally at the half.

Dillon had 146 yards on 21 yards for seven yards per carry in the first half, with a touchdown to go with it.

The Orange, as a whole. had 53 team rushing yards in the opening half.

Syracuse began the second half needing an answer.

They responded by leaving the on-lookers with more questions, after DeVito took surveyed the field and decided to take off on 4th-&-7, not reaching the first-down marker, and the Orange lost the ball on downs, at the Eagles' 26-yard line.

Boston College would continue to follow their MO, trusting in the run, carrying the ball nine-straight times on their first drive of the second half, and concluding the drive with a five-yard touchdown run by Dillon, who carried the rock eight out of nine times on this possession, with Bailey getting the lone other carry.

Syracuse would turn the ball over on downs on their next drive, and Boston College would punt their next opportunity away, before the Orange were able to get into the end zone for the first time in the second half, and third time in the game as a whole, when DeVito aired out to Trishton Jackson for an 85-yard pass-play. This touchdown brought the score to 51-27 Eagles with 3:33 left in the third quarter.

The Eagles would take a 10-play drive from the bottom of the third quarter to the beginning of the fourth, scoring on a carry by Dillon from two yards out to extend their advantage to 58-27 at the 13:52 to play in the game.

At the conclusion of this drive, Dillon had 242 yards on 35 carries (6.9 yards per carry), with three touchdowns, in this game.

With 5:18 to play in the game, DeVito's day came to an end, with head coach Dino Babers giving Rex Culpepper an opportunity with the Orange offense.

DeVito ended the contest 25-for-36 with 289 yards, three passing touchdowns, and no interceptions. Though his 69.4% completion percentage and overall numbers looked good, the Syracuse offense failed to consistently move up the field and play-calling was an issue, along with DeVito's aforementioned fumble that resulted in Boston College's score by Miranda right before halftime.

The game would conclude with the 58-27 score, with the Eagles ending just shy of 700 total offensive yards, at 691.

Simply put, Syracuse's offense struggled to move the ball and the defense failed to stop the Boston College rushing attack and overall offense, as made clear in the fact that the Orange led 17-10 at the end of the first quarter, but then followed that up with a 48-10 deficit to the Eagles among the remaining three quarters.

With the win, Boston College gets back on the winning side of things at 5-4 overall, and are .500 in the Atlantic Coast Conference (ACC), at 3-3.

Syracuse falls to 3-6 on the season, and remain the only winless team in ACC play of 14 member schools, at 0-5.