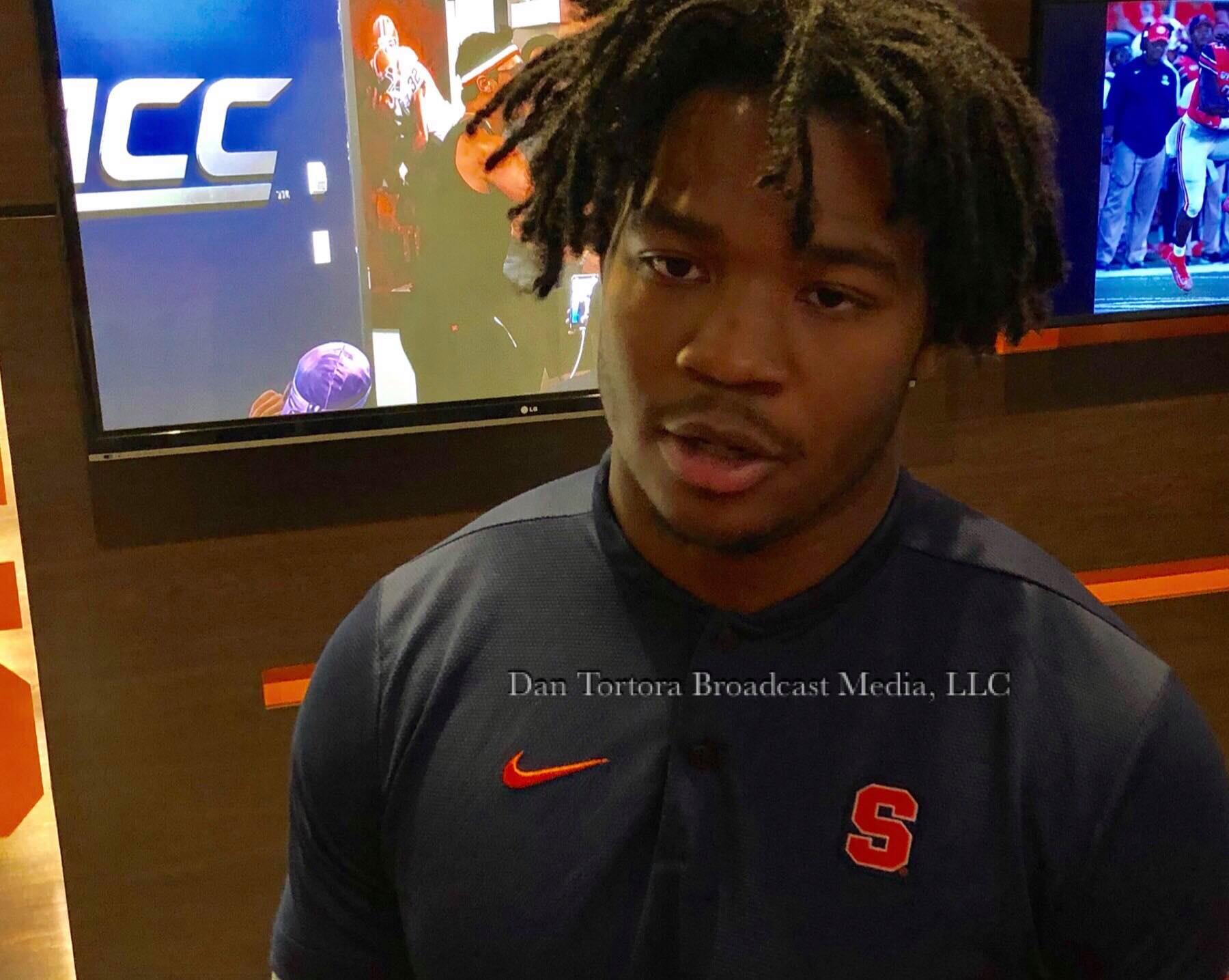 The Syracuse Orange came into this match-up against the visiting Holy Cross Crusaders with the opportunity to have a winning record for the first time this season since being 1-0 after their road win to start the 2019 campaign versus the Liberty Flames.

On their second drive of the game, Orange senior running back would accomplish a personal triumph when he ran for a five-yard gain that would place him at 2,004 career rushing yards, making him the 23rd player in Syracuse history to rush for at least 2,000 career yards. He had a four-yard run on the team's opening drive that had gotten him to 1,999.

The Orange would not, however, come away with a score on this drive, punting the ball back to the Crusaders.

But the special teams' unit, for the second week in a row, would force a fumble on an opponent's punt-return attempt, and Syracuse would recover; Sophomore long-snapper Aaron Bolinsky would force the fumble by senior punt-returner Jon Jon Roberts and redshirt-sophomore defensive lineman Tyrell Richards would recover the ball.

It took just one play for the Orange to score on their third drive of the game when DeVito, at the Crusaders' 17-yard line, would pass to Trishton Jackson for a 17-yard touchdown to move the Orange ahead 14-0 at the 8:25 mark of the first quarter.

On their third drive of the game, Holy Cross achieved their first first down, gaining two of them to get into Syracuse territory for the first time in this contest. But the team would fail to complete a pass from junior quarterback Connor Degenhardt to freshman wide receiver Ayir Asante on 4th-&-6, turning the ball over on downs.

Syracuse would take their following drive from their own 39 to the Holy Cross 34-yard line, and would go for it on their own fourth down, on 4th-&-7, when redshirt-senior kicker/punter Sterling Hofrichter would boot a 52-yarder through the uprights for a 17-0 advantage with 2:05 remaining in the first quarter.

The Orange ended the first quarter with DeVito going 6-for-10 for 83 yards, two touchdowns, and no interceptions, while Neal had 17 yards on four carries, Trishton Jackson had 50 yards on four catches and one touchdown, and Hackett had a touchdown on his lone reception of the quarter.

Crusaders' sophomore kicker Derek Ng would end the shutout when his 48-yard attempt went through the uprights itself early in the second quarter to bring the score to 17-3 Orange at the 12:49 mark.

Hackett got involved in special teams on Syracuse's first drive of the second quarter when he took the kickoff return 23 yards to team's 42-yard line.

On this drive, redshirt-junior running back Abdul Adams would take his first carry of the game 11 yards and then, on 4th-&-4, Adams would take off through the middle and charge forward for a 19-yard touchdown run to make it 24-3 Syracuse with 10:09 before half.

The Orange would punt it away at the 7:06 mark after head coach Dino Babers caught a pass on the sideline from DeVito, preventing himself from having to do push-ups this time around.

Richards would lower the boom on Degenhardt on 3rd-&-17, hitting him clean for a two-yard loss, but the officials would rule it targeting and, instead, provide a first down for the Crusaders, moving them out to their own 22-yard line.

With 1:23 remaining in the first half, Syracuse would go no where, punting the ball away from their own 27-yard line on 4th-&-18.

The Orange would, however, get to the break without a score coming from the other side, with a 24-3 lead at the half.

At the culmination of the first half, Syracuse had 184 total offensive yards to Holy Cross' 107. The Orange ran the ball 15 times for 74 yards, while the Crusaders gained 15 yards on 16 carries. Syracuse's DeVito threw for 110 yards, going 11-for-18, with two touchdowns and no interceptions and Holy Cross' Degenhardt went 10-for-20 for 92 yards, no touchdowns, and no interceptions.

Syracuse would have the ball for the first minute and 24 seconds before punting away their initial drive of the second half.

Senior linebacker Lakiem Williams would aid the Orange offense when he tipped a third-down attempt by Degenhardt to force Holy Cross to punt it right back, inside 12 minutes left in the third quarter.

Syracuse would punt away their second drive of the second half as well, after netting 16 yards on the possession.

Holy Cross would end their second drive of the second drive on a punt, too, from their own seven-yard line with a little over nine minutes left on the third-quarter game clock.

The Orange would begin their third drive of the half on the Crusaders' 27-yard line following a 34-yard punt return by senior wide receiver/returner Sean Riley.

Syracuse would come away with points on this drive when redshirt-sophomore kicker Andre Szmyt would make his first attempt of the game, a 26-yarder, to place the Orange ahead 27-3 with 5:37 remaining in the third quarter.

The Crusaders' third drive of the second half would end in their third punt of the half after junior defensive end Kingsley Jonathan sacked Degenhardt for an eight-yard loss back to the Crusaders' 15-yard line that brought up 4th-&-20.

Syracuse would come away with points to follow with their first touchdown since the 10:09 mark of the second quarter, when Harris caught the ball over the middle and faked not once, but twice, coming around to the outside right and chugging away for the 47-yard score, his first touchdown of the 2019 season, giving the Orange a 34-3 lead with 1:15 to go in the third quarter.

The Orange would start the fourth quarter with a touchdown from DeVito to freshman tight end Luke Benson. Benson came into the game with two catches for 26 yards in this his first collegiate season. His catch-and-run for his first collegiate touchdown would go for 70 yards itself. With the score, the Orange rolled ahead 41-3 with 14:40 to play in the contest.

Redshirt-senior defensive end Brandon Berry would sack Degenhardt for a loss of five yards on Holy Cross' first drive of the fourth quarter, aiding to a punt shortly after, the fifth punt on five drives for the Crusaders in the second half.

DeVito would air it out on the team's next possession on an ill-advised throw to a group of white jerseys, which resulted in an interception by Holy Cross junior cornerback Grant Holloman. This would be DeVito's first interception thrown since two games ago, versus the Clemson Tigers, also at home in the Dome.

The Crusaders would punt the ball away for the sixth-straight time in the second half, but junior wide receiver/returner Nykeim Johnson would try to pick up the bouncing ball and fail to corral it in, giving the Crusaders a first down on the Irange 38-yard line after the fumble was recovered by sophomore defensive back Terrell Prince.

Senior Emmett Clifford would come in at quarterback for Holy Cross and his attempt on 4th-&-4 would fall incomplete, giving Syracuse the ball on their own 32, with their backup coming in as well, as redshirt-senior Clayton Welch came onto the field with 10:18 to go.

Welch went 3-for-4 on his first possession under center for Syracuse and freshman running back Jawhar Jordan, Jr., would get in the game and seemingly have the first down inside eight minutes to go, but would fumble it away on the Crusaders' 28-yard line, losing possession.

For the second-straight possession, Clifford's pass would fall incomplete for a turnover on downs, with the Orange taking over on their own 33-yard line with 1:51 to go. Syracuse would not come away with any points on their following drive.

With under 30 seconds to play, freshman defensive lineman Drew Tuazama would be flagged for targeting on his sack attempt, joining him with Richards in being ejected from the game.

DeVito ended the game 19-for-31 for 269 yards, four touchdowns, and one interception.

Harris led the receiving core with 107 yards on the day.

DeVito threw four touchdowns to four different players, as aforementioned, with Trishton Jackson, Aaron Hackett, Taj Harris, and Luke Benson all getting into the end zone.

With 36 net rushing yards in this game, Neal now has 2,031 career rushing yards, and the Orange have a winning record once again this season at 3-2 as a result of their 41-3 victory over the Crusaders, who fall to 1-3 on the season.