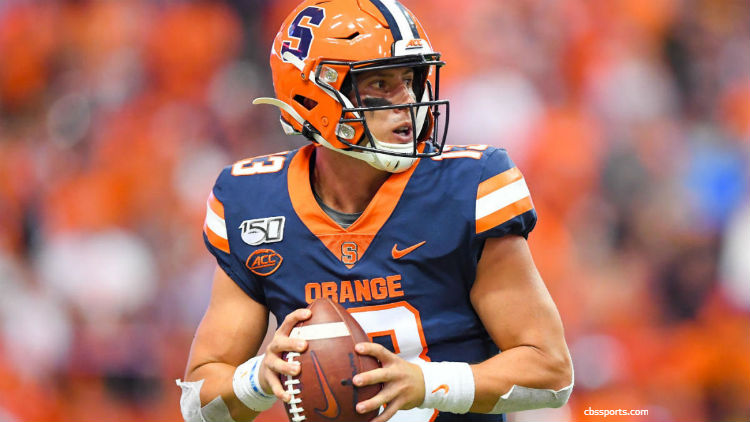 The Syracuse Orange opened the Dome this season in a game where they failed to reach the end zone once in a 41-6 loss to the #1-ranked Clemson Tigers.

A touchdown on their opening drive of this contest with the visting Western Michigan Broncos, coming from senior running back Moe Neal, before two minutes had even ticked off the game clock.

Syracuse ran four times on this drive, two keepers by redshirt-sophomore quarterback Tommy DeVito and two by Neal. After running for no gain, DeVito kept the ball on the very next play and used his legs for a 60-yard running play. Neal's touchdown came on his second attempt, this from 23 yards out, giving the Orange a 7-0 lead at the 13:23 mark of the opening quarter.

The Orange would punt away their second and third drives of the first quarter, but the special teams' unit bailed out the squad after the third offensive drive when redshirt-junior running back Abdul Adams recovered a muffed return attempt by senior punt-returner Keith Mixon, Jr.

It would take Syracuse's offense just three plays to score, with Adams rushing for three yards followed by two completions by DeVito to junior tight end Aaron Hackett, the first for four yards and the second a 10-yard play that began with a shovel pass by DeVito and ended with Hackett untouched up the middle en route to the end zone. With 5:29 left in the first quarter, the Orange were ahead 14-0 on the visiting Broncos.

Western Michigan's next drive looked as if this would be their first scoring drive when senior running LeVante Bellamy rolled to the outside. Attempting to cross the goal-line, Bellamy was tripped up by redshirt-senior free safety Antwan Cordy and Bellamy fumbled into the end zone. Fellow redshirt-senior, cornerback Christopher Fredrick, recovered the ball in his own end zone and the Orange offense got the ball back on a touchback to their own 20.

Syracuse's offense would take this drive out of the first quarter and into the second, with 11 plays resulting in their third touchdown of the contest, a 36-yard touchdown run by DeVito, who had an opening on the right side that he took to daylight with 12:45 to go in the second quarter to make it 21-0 Orange.

A senior defensive end would make his own play on the other side when Western Michigan's Antonio Balabani sacked DeVito for a loss of 11 yards, forcing Syracuse to punt it away.

On 3rd-&-5, Wassink would find redshirt-freshman wide receiver DaShon Bussell by the left sideline for a 39-yard gain. A play later, Bellamy, who had fumbled on the previous drive, ran 47 yards to the house for the Broncos' first score of the game, bringing the score to 21-7 Orange with 9:09 before half.

Syracuse's defense would stuff Bellamy on their one-yard line on 3rd-&-Goal on Western Michigan's next drive for a one-yard loss, courtesy of Robinson and senior defensive tackle KJ Ruff. But former Syracuse offensive coordinator/quarterbacks' coach and now Western Michigan head coach, Tim Lester, went for it on 4th-&-2 and Wassink found senior tight end Giovanni Ricci for the team's second score of the game. At the 4:56 mark of the second quarter, the Orange had been cut to 21-13 after junior kicker Thiago Kapps missed the extra point.

DeVito would go 3-for-5 on the next Syracuse drive, but after he was sacked for a loss of two yards on third down inside of the Western Michigan redzone and Syracuse would settle for a field goal, a 24-yarder by redshirt-sophomore kicker Andre Szmyt to move the Orange back ahead by double-digits at 24-13 with 2:28 before half.

At the break, Syracuse remained ahead 24-13.

The Orange defense had stifled the rushing attack of Western Michigan in the first quarter, allowing 18 yards on five carries, but they would give up 93 yards rushing on 10 carries in the second quarter. Broncos' running back Bellamy went from 17 yards in the first quarter to 104 by half.

Wassink went 8-for-12 in the first quarter and finished the first half 13-for-23 with one touchdown and no interceptions.

DeVito went 12-for-14 in the opening quarter and went into the locker room 17-for-22 with one touchdown and no interceptions, as well as a rushing touchdown.

Syracuse would get an accidental assist from Western Michigan when Wassink overshot his receiver, and the Broncos would punt away their first possession of the second half.

The Orange responded with a touchdown to begin the second half on their own first drive when DeVito stepped up out of a collapsing pocket and sent a flare down the field that redshirt-junior wide receiver Trishton Jackson got under and reeled in for a 59-yard pass play to make it 31-13 at the 11:14 mark of the third quarter.

Western Michigan would run the ball four times on their second drive of the second half, with the latter three coming from Bellamy, runs for 18, three, and 43 yards, respectively, the last eluding a tackle attempt in the middle and moving to the outside, out-running everyone.

The Broncos would attempt a two-point conversion to follow the 43-yard Bellamy touchdown, but Wassink's pass attempt would fall to the ground with the Orange providing strong coverage, bringing the score to 31-19 at the 9:17 mark of the third quarter.

Syracuse began their second drive of the second half balanced with run, pass, run, pass, before DeVito would send the ball out to Trishton Jackson who would shake off a tackle attempt and tight-rope the sideline for a 46-yard touchdown to elevate the Orange to a 38-19 lead with 7:33 remaining in the third quarter.

Wassink seemingly had some luck on the Broncos' third drive of the second half when the ball went by what looked to be his intended receiver, by two Orange defenders, and into the hands of sophomore wide receiver Jaylen Hall who went 60 yards to the house to bring the score to 38-26 Orange with 5:58 left on the third-quarter clock.

Syracuse's third drive would appear to end on a punt, but Mixon was flagged for roughing the kicker when he contacted Syracuse redshirt-senior punter Sterling Hofrichter.

But aiding an opponent would happen on both sides when the Orange gave the ball right back when Adams fumbled the ball on a rush attempt. Junior Ali Fayad would force the fumble and sophomore cornerback Patrick Lupro would recover the ball on the Orange 35-yard line.

On 3rd-&-13, Wassink found Ricci again as he did earlier in the contest, untouched in the middle with no one picking him up on the Syracuse defense; this would be a 20-yard pass play to the Syracuse 19-yard line.

Western Michigan would lean on their run from here in this drive, with senior running back Davon Tucker and freshman running back Sean Tyler, with Tyler taking the ball around to the left side and ahead for an eight-yard score to bring the Broncos to their closest deficit of the game up to this point, down five at 38-33 with 49 seconds remaining in the third quarter.

With 10:34 remaining in the game, Wassink would keep the ball on 3rd-&-1. Originally, the officials gave him the first down but after furthee view, Coleman and Fredrick were credited for stopping Wassink short of the first down.

Western Michigan would go for it on 4th-&-1 and Tucker would get sent backward by Ruff and senior strong safety Evan Foster for a turnover on downs.

The back-to-back stout defensive plays by the Orange would place the offense on the Broncos' 41-yard.

Syracuse would attain consecutive first downs on a DeVito pass over the middle to senior wide receiver/returner Sean Riley for 11 yards followed by a carry for 18 yards from Neal to get the team to the Western Michigan 10-yard line with 9:28 to go.

Those final 10 yards needed came from a pass from DeVito to Hackett for their second connection of the game, moving the Orange out to a 45-33 advantage with 8:45 to play in the game.

Syracuse brought the pressure on 4th-&-10, causing Wassink to get the ball out, and it fell beyond his receiving target for a turnover on downs with 6:37 to play, with the Orange defense placing their offense on the field at their own 28.

But the Orange would fail to gain a first down as they tried to run the clock down on the ground, and would punt it away with 4:17 remaining.

Redshirt-sophomore strong safety Eric Coley provided close coverage on third- and fourth-down tries by the Broncos, causing a turnover on downs to place the Orange on the Broncos' 27-yard line with 3:40 left on the clock.

Neal would carry the ball three times on the Syracuse drive that followed Coley's strong stance, gaining a first down on his second attempt, a 10-yard rush to the Western Michigan 16-yard line. He would gain the remaning 16 yards on his next carry, raising the Orange to a 52-33 advantage with 3:04 to go.

Coley would continue to finish strong, intercepting Wassink on 3rd-&-9 and returning the ball five yards to place the Syracuse offense at the Western Michigan 34-yard line with 2:29 remaining.

Sophomore running back Jarveon Howard would help run the clock down on a 19-point Orange win, 52-33, over the Broncos to get to .500 on the season at 2-2, 2-1 in non-conference play and 0-1 in the Atlantic Coast Conference (ACC).

With the loss, Western Michigan joins Syracuse at 2-2 on the season.

DeVito would end the game with five total touchdowns, four passing and one rushing, going 27-for-35 for 287 yards and no interceptions.

As a team, the Orange helped create and recover three fumbles, two on defense and one on special teams, and attained an inteception as aforementioned from Coley off of an attempt by Wassink.