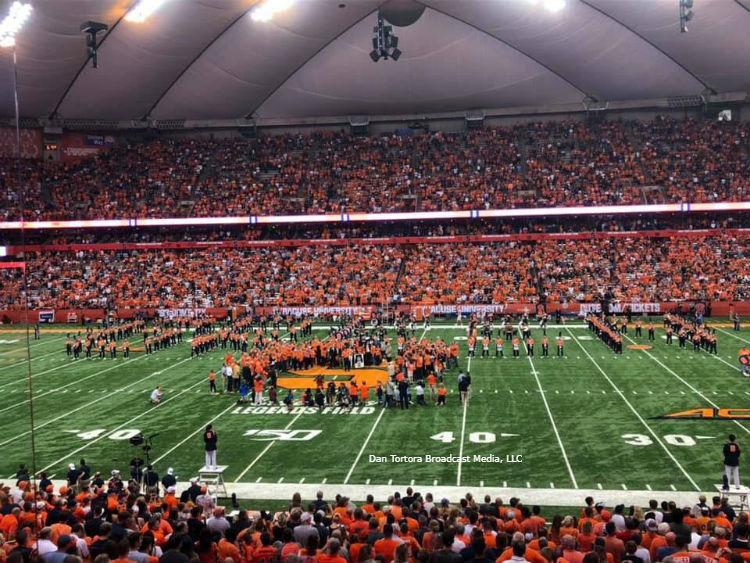 Two years ago, the Clemson Tigers entered the Carrier Dome in Central New York having won a national championship. They were ranked in the top two in the country at the time of play.

Now in 2019, Clemson came in following a national championship victory as well, and once again, came into the Dome ranked in the nation's top two.

The Syracuse Orange were unranked two years ago and given little to no chance to win that game.

This time around, despite the hype they came into this season with, there was little to no belief Syracuse would win here in 2019, entering this contest unranked as well and coming off of a 43-point disaster on the road versus the Maryland Terrapins, 63-20.

The Orange defense, which failed to stop much of anything the week before, forced the Tigers to punt on their opening drive after senior defensive end Alton Robinson batted down a pass attempt by sophomore quarterback Trevor Lawrence to bring up third down. Lawrence would throw the ball into the ground on his third-down attempt with Syracuse all over the coverage.

But redshirt-sophomore quarterback Tommy DeVito's two pass attempts would fall incomplete despite his good ball placement, and Syracuse would punt the ball right back on their opening drive.

On their second offensive attempt, Lawrence would find junior wide receiver Amari Rodgers who had gotten ahead of Orange sophomore free safety Andre Cisco, resulting in a 16-yard touchdown coming from perfect timing and placement by Lawrence. Lawrence went 3-for-4 on the drive to make it 7-0 Tigers at the 10:29 mark of the first half.

Back-to-back penalties would mar the second drive for Syracuse, and redshirt-senior Sterling Hofrichter would punt it away once again.

Clemson's Lawrence would get rushed out of the pocket but he remained poised, showed his confidence and arm strength, and sent a pass deep downfield to junior wide receiver Tee Higgins who caught the ball overtop of his defender amidst double-coverage, turning around while moving and displaying impressive hands on the play. This was a 36-yard pass play that moved the Tigers from their own 27 to the 37-yard line of the Orange.

Junior running back Travis Etienne would rush four times for a total of 26 yards on this drive, advancing Clemson to Syracuse's 1-yard line, but would come out after being down on the field. Lyn-J Dixon would attempt to obtain the final yard, but the Orange would stuff the sophomore running back. Lawrence would fake the next handoff to Dixon and keep it himself, moving over the goal-line with little contact to claw the Tigers up to a 14-0 advantage with 5:34 remaining in the opening quarter.

DeVito would complete his first three passes of the contest on Syracuse's third drive of the game, to sophomore wide receiver Taj Harris, redshirt-junior wide receiver Trishton Jackson, and senior wide receiver Sean Riley, respectively. However, the Orange would punt yet again, for three punts on three drives.

Syracuse would force Clemson to punt on their fourth drive of the game, still in the first quarter, giving the Orange the ball with 36 seconds left in the opening quarter, down 14-0.

At the conclusion of the first quarter, DeVito aired out to freshman tight end Luke Benson, who reeled in a 24-yard completion to get to the Tigers' 29-yard line. Benson's reception was his first collegiately.

Syracuse would continue their fourth drive of the game with five consecutive rushes to start the second quarter, with DeVito darting forward for four yards and then two yards shortly after that would set up an Orange first down on the Tigers' 18-yard line.

With this being Syracuse's most successful drive of the first half up to this point, it will end rather lacklusterly, with the Orange settling for a field on 4th-&-3 from the Tigers' 11-yard line. Redshirt-sophomore kicker Andre Szmyt connected on his 29-yard attempt, getting Syracuse on the board, down 14-3, with 12:24 before half.

Lawrence would overthrow sophomore wide receiver Justyn Ross on third down on Clemson's fifth drive of the game and first drive of the second quarter, punting the ball away for the third time on five drives.

On the fifth drive of the game for the Orange, the team's offensive line would allow back-to-back sacks, failing to protect DeVito, and the Orange would end this drive with their fourth punt in five possessions.

The Syracuse defense would stuff Dixon on a short-yardage attempt for the second time in the game, this on 3rd-&-1, forcing Clemson's fourth punt of the night, this coming on their sixth drive of the first half.

A quick three-and-out would end the sixth drive of the game for the Orange after the offensive line failed once again to block for DeVito, leaving him scrambling.

The Tigers would gain 58 yards on one play during their seventh possession, when Lawrence would connect with Higgins and Higgins would head up the field in a diagonal pattern, moving the Tigers from their own 34-yard line to the Orange 8-yard line. However, a personal foul on Clemson would move them back 15 yards to Syracuse 23-yard line. They would end this drive with a 40-yard field goal from sophomore kicker B.T. Potter to raise Clemson to a 17-3 lead with 4:31 left in the second quarter.

Syracuse moved from their own 25 to the Clemson 8-yard line on back-to-back catch-and-runs by senior running back Moe Neal, for 50 and 17 yards, respectively. They would conclude their seventh possession with Szmyt's second field goal of the game, this from 23 yards away, to bring the score to 17-6 Clemson with exactly two minutes before the break.

The Orange defense would create another opportunity for DeVito and the offense when they forced a three-and-out by the Tigers with 1:37 remaining in the second quarter, but the Orange would let the clock run down to the half.

Each team would finish the first half with five punts apiece and the Tigers would have the only touchdowns of the fist 30 minutes of play.

At the break, Clemson had 50 rushing yards on 13 attempts, while Syracuse had three yards on 19 carries, with DeVito losing 32 yards in the backfield trying to escape from an onslaught of pressure in the first half.

The Tigers had 198 passing yards from Lawrence to DeVito's 139 for the Orange.

Both teams were 2-for-2 inside the redzone, but Clemson's two scores were touchdowns and Syracuse's were field goals.

On the Tigers' first drive of the second half, redshirt-senior cornerback Christopher Fredrick would intercept Lawrence and return the ball 20 yards to the Tigers' 9-yard line, giving the Orange an opportunity to cut their deficit to three to four points.

The Tigers made the Orange pay for not capitalizing on their turnover, when they capitalized on their takeaway from the Orange on a pass from Lawrence to Rodgers that saw Rodgers get ahead of the Orange defense as he took off to the races, crossing into the end zone on an 87-yard play to bring the score to 24-6 with 9:42 left in the third quarter.

Syracuse would steal away Clemson's third drive of the second half when sophomore nickelback Trill Williams intercepted Lawrence on the Clemson 44 and returned the ball 41 yards to the Clemson 3-yard line. The takeaway would give Lawrence back-to-back inteceptions thrown.

However, just as with the prior interception, the Orange failed to capitalize, this time from a mere three yards out from the goal-line, with four straight rushing attempts, the first two from sophomore running back Jarveon Howard and the following two by DeVito, as Syracuse lost the ball on downs when DeVito achieved no gain on 4th-&-Goal.

Clemson would attain points on the heels of the second-consecutive Syracuse blunder when Potter connected from 37 yards away to bring the Clemson lead to three touchdowns, 27-6, with 2:24 remaining in the third quarter.

On the Tigers' sixth possession of the second half, Lawrence would throw from right to left to freshman wide receiver Frank Ladson, Jr., in the end zone for a seven-yard touchdown with 10:11 to go in the game, elevating the Tigers to a 34-6 advantage over the Orange.

With 8:38 to go in the contest, Tigers' head coach Dabo Swinney relieved Lawrence for the day, putting backup quarterback, sophomore Chase Brice, in the game.

Syracuse received the ball after Brice's first possession ended in a punt, with 5:54 remaining.

After taking a hit, DeVito came out and backup quarterback, redshirt-senior Clayton Welch, entered with 1:42 to play, on 3rd-&-12. The Orange would turn the ball over on downs following two throws that went no where.

The Tigers' backups continued the onslaught when freshman running back Chez Mellusi would run up the middle and out ahead of everyone for a 57-yard touchdown that rose the Tigers to a 41-6 lead that would be the final tally.

Clemson's second-half possessions with Lawrence at quarterback were, in order, as follows: interception, touchdown, interception, field goal, missed field goal leading to a turnover on downs, and a touchdown.

The Orange fall to 1-2 on the season, with a two-game losing streak and a 0-1 start at home as well as inside the Atlantic Coast Conference (ACC).

Clemson moved to 3-0 in their 2019 campaign and 1-0 to start ACC play, winning their first road game of the season in this 41-6 victory at Syracuse.