A Short-Lived Trip to Utah for the Orange 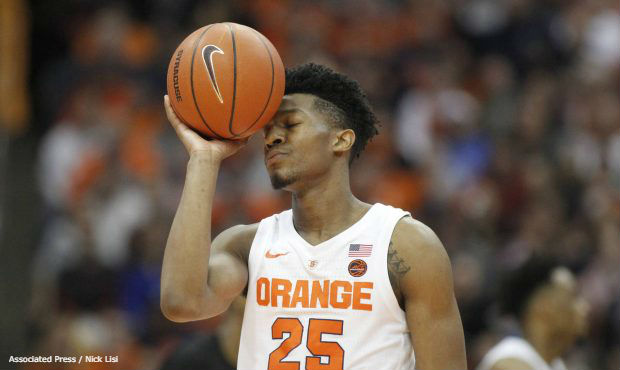 The Syracuse Orange and the Baylor Bears came out in an NBA-Jam style fashion in the first half, with both squads making more than half of the three-point attempts they took in the first 20 minutes of play.

Sophomore guard Mario Kegler of the Bears began the game with two deep shots to give Baylor the first advantage of the contest, ahead 6-0.

A three by freshman guard Jared Butler at the 16:34 mark of the first half moved the Bears ahead of the Orange by eight, 12-4. Butler's pass to senior guard King McClure at the 15:48 mark would end with a three by McClure to move Baylor to a 15-4 lead, Baylor's largest lead of the first half.

Four players had made at least one three-point attempt at the time of the Bears' 15-4 advantage, with Kegler making two, Butler with one, McClure with one, and senior guard Makai Mason wtih one as well.

But a little over three minutes later, at the 12:23 mark of the first half, a three by Syracuse junior shooting guard Tyus Battle had the Orange within one possession, down 18-16. Battle's deep shot came on a 12-3 run by Syracuse.

The Orange would take their first lead of the game at the 6:53 mark when Battle completed a four-point play, knocking down a three and the subsequent free throw, to go ahead 27-25.

Syracuse's largest lead of the first half would be four points, 31-27, when redshirt-junior guard/forward Elijah Hughes connected from long range.

Baylor, however, would retake the lead off of a three by Mason that made it 33-32 in favor of the Bears with 2:45 to play before half.

Hughes would tie the contest for the Orange at 35 apiece on a three at the 1:54 mark, but the Bears would gain the lead back thanks to a deep shot by Mason immediately following Hughes' deep make.

At the break, five players had made at least one shot from beyond the arc for the Bears: Mason was 4-for-6, Kegler 2-for-2, Butler 2-for-5, junior guard Devonte Bandoo off the bench was 1-for-1, and McClure was 1-for-4.

Syracuse's three-point makes in the first half came from three players: Hughes went 5-for-8, Battle 2-for-3, and sophomore forward Oshae Brissett was 2-for-4.

The Orange and the Bears opened the second half with nine lead changes in less than six minutes (nine by the 14:20 mark), including a string of six-straight made field goals between the two teams, each squad with three from the 17:02 mark to 15:28 remaining in the second half.

Less than a minute after Syracuse took a 53-50 lead, Bandoo tied the game for Baylor on a three. Including this tie, there would be three ties between the 12:!1 mark and 9:47 remaining in the game.

The Orange would fail to box out sophomore guard Mark Vital who get an offensive rebound in the lane and a putback to give the Bears a 62-57 advantage.

From the 9:47 mark to 4:58 left in the game, Syracuse did not connect on a single field goal, going almost five minutes without a make from the field.

With 4:35 remaining, Hughes got to 23 points, a new single-game career high. He connected from long range and followed with three made free throws after being fouled trying to knock down another three, bringing the Orange from down 68-59 to a one-possession game, 68-65. He would leave the charity stripe after attaining his 24th point of the night.

Mason, who had 16 points in the first half, came inside the arc with no one boxing him out on the Syracuse defense, got his rebound off of a missed three, and nailed a jumper for his first points of the second half, to move Baylor ahead 72-67 with 2:43 remaining.

A foul by Battle would send Mason to the line with about a minute left and Mason would go 2-for-2, giving him 20 points overall, and giving the Bears a 74-67 advantage.

Senior center Paschal Chukwu would make both of his free throws right after to bring the Orange within five, 74-69, but the Orange would fall victim to not having anyone back in the full-court press and Butler would send the long ball down-court to junior forward Freddie Gillespie for a dunk that elevated the Bears to a 76-69 lead.

Mason, fittingly, would score the final points of the contest by either side, making two free throws to secure the win for 9th-seeded Baylor over 8th-seeded Syracuse, 78-69. He would finish with 22 points in the game.

The Bears would finish the match-up on a 10-4 run en route to moving on to the Round of 32 inside the NCAA Tournament to face the 1st-seeded Gonzaga Bulldogs.

Eight of the nine Baylor players that had minutes in this game scored: Mason with the aforementioned 22 followed by Butler with 14, Kegler with 13, and McClure with nine for the starters. Off of the Baylor bench, Gillespie had eight, Bandoo with six, and freshman guard Matthew Mayer had two.

The Orange, with starting point guard and senior Frank Howard suspended for the game, played seven, with Hughes leading the team with 25 points, going 6-for-11 from long range, followed by Battle with 16, Brissett with 14, Chukwu with seven, and true freshman shooting guard Buddy Boeheim with two for the starters. Sophomore forward Marek Dolezaj had five points off the bench, while true freshman point guard Jalen Carey did not attempt a single field goal.