Syracuse Contests, But Duke Wins Round 3 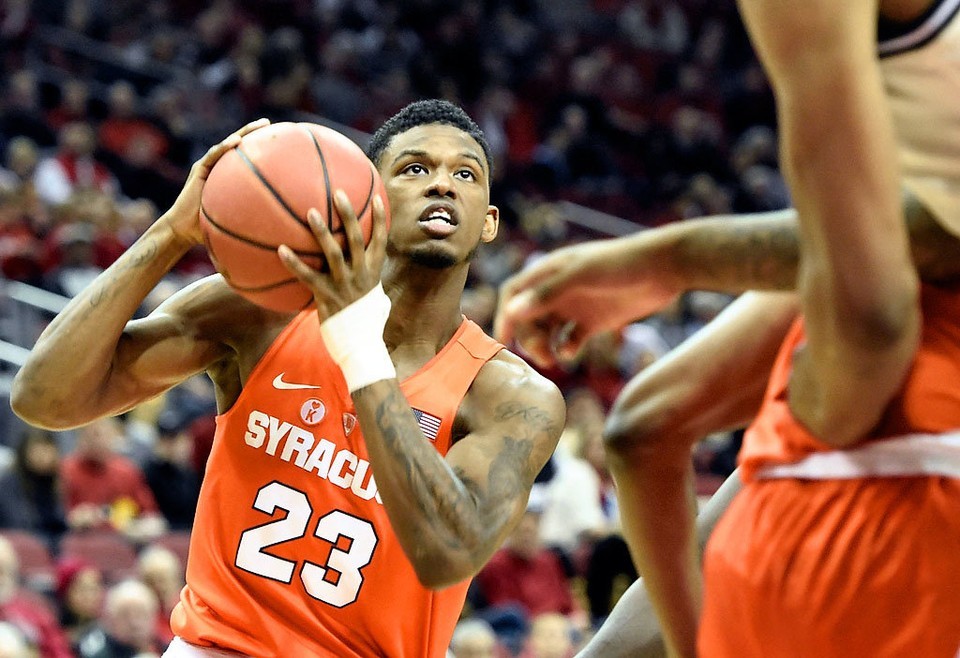 In Round 3 of the Syracuse Orange - Duke Blue Devils series this season, the Orange got on the board first, with senior point guard Frank Howard connecting from long range to put his team ahead 3-0. Howard was coming off of a game the night before, in Round 2 of the Atlantic Coast Conference (ACC) Tournament, where his offensive touch came back to the tune of 18 points.

True freshman forward Zion Williamson would respond with a layup and a dunk to give the Blue Devils their first lead of the macth-up, at 4-3.

Howard would take it back with a layup of his own that brought the score to 7-6 Syracuse.

But after their 9-6 lead that came off of a layup by sophomore forward Oshae Brissett, Syracuse would go quiet offensively.

After slamming down the rock on the previous possession, Williamson was left open beyond the arc and cashed in from deep, showing the depth of his range on the floor, giving Duke a 17-11 lead.

Williamson would take a breather at the 9:27 mark of the first half, already having 15 points, making all seven of his field-goal attempts, while accumulating five rebounds, four steals, one assist, and one turnover.

With under 5:30 before the half, Williamson had 16 points himself, while the Orange had 15 points in total, as a team.

Howard would go on a run himself, making four consecutive jumpers, two from inside the arc and two from the outside, for a total of 10 points. Overall, it was a 10-2 run by Syracuse, with Williamson getting a putback in the midst of it.

True freshman shooting guard would add to the run with his first points of the game, his own make from long distance.

Syracuse would end the opening half on a 13-2 run that would get them within two possessions, down six at 34-28, heading into the locker room.

The Orange were down by as many as 17 in the first half.

Williamson had 21 of Duke's 34 first-half points, while Howard accounted for 15 of Syracuse's 28 points in the opening half in the absence of junior shooting guard Tyus Battle for the second game in a row.

Senior center Paschal Chukwu would get the first points for either side in the second half, when he went 1-for-2 at the line after being fouled attempting to finish an alley-oop attempt.

But Chukwu would pick up his fourth foul with 18:16 remaining in the game, placing him one away from going out for the game.

Howard achieved his first points of the contest on a jumper before the 16-minute mark, giving him 17 in total at the time.

Less than five minutes into the second half, Syracuse had cut their deficit down to five points on three separate occasions.

Brissett would make a free throw then cash in at the rim, followed by a layup by Howard, and then back-to-back three-pointers by true freshman shooting guard Buddy Boeheim to tie the game at 46 for a Syracuse team that was once down by as many as 17.

With two free throws before the 10-minute mark of the second half, Howard rose to and passed 20 points, at 21.

From when Syracuse tied the game at 46, Duke doubled Syracuse's points, going on a 14-7 run to the nine-minute mark of the contest, moving out to a 60-53 lead.

At the 6:24 mark of the second half, Chukwu fouled out, committing his fifth foul after losing possession for the Orange on their end of the floor. He had three points and two rebounds.

Brissett would knock down a three, followed by redshirt-junior guard/forward Elijah Hughes going 2-for-2 at the line to cut the Orange deficit to seven, at 67-60, with a little over five minutes to play.

Williamson would end the game leading all players on either side with 29 points for Duke, but Howard of Syracuse was right behind him with 28.

The loss moves Syracuse to 20-13 on the season, while Duke elevates to 27-5, and will advance to the ACC Tournament Semifinals to face longtime rival, the North Carolina Tar Heels, who got past the Louisville Cardinals in the tournament's quarterfinals.