On to Duke! Syracuse Bands Together Without Battle 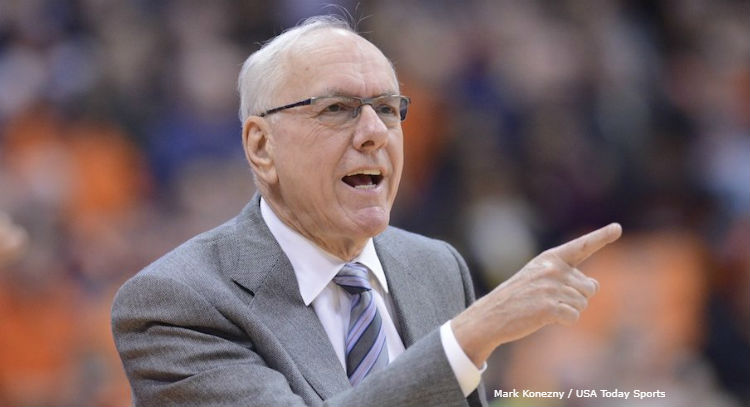 The Syracuse Orange, still looking for their 20th win of the season, would head into their first game inside this year's Atlantic Coast Conference (ACC) Tournament without junior shooting guard Tyus Battle, their leading scorer, who accounts for almost 20 points a game at 17.2 on average.

Senior point guard Frank Howard, who has been quiet offensively this season, began the game with two early three-pointers against longtime rival, the Pittsburgh Panthers.

The first lead for Syracuse would come when true freshman shooting guard Buddy Boeheim, who started in place of Battle, stole the ball from fellow true freshman guard Xavier Johnson, gained control, and took it himself for a fast-break bucket that would bring the score to 8-7 Orange.

Pittsburgh took the lead back immediately on a three by senior guard/forwardJared Wilson-Frame, assisted by Xavier Johnson, to bring the score to 10-8 Panthers.

Stiff-arming his defender, senior center Paschal Chukwu would come out of the game as sophomore center Bourama Sidibe would cehck in to fill the open shot at the 15:21 mark.

Redshirt-junior guard/forward Elijah Hughes, who did not score a single point in 11 minutes played in the regular-season finale, a road loss to the Clemson Tigers, knocked down a three before the 11-minute mark to bring the Orange deficit to four, 17-13.

Chukwu would chase down the offensive rebound but would throw to the right of Buddy Boeheimm leading to a steal and slam by Xavier Johnson that extended Pittsburgh out to a 19-13 lead.

Buddy Boeheim would cash in when the bank was open and the ball bounced in off of the glass to bring the Orange deficit to three, at 19-16, with 8:31 to play before halftime.

But Pittsburgh would double Syracuse points on a 14-7 run to get out to their first double-digit lead of the game, at 33-23, with 4:38 to play in the opening half.

True freshman point guard Jalen Carey, who came in at the 6:49 mark after playing minimal minutes this season, went coast-to-coast after a miss by the Panthers, scoring at the rim with his right hand to bring the Orange within two possessions, 33-27.

Hughes would connect on his second deep ball of the game on the very next Syracuse possession, turning what was a double-digit deficit into a three-point game, 33-30 Pittsburgh.

Syracuse came out with a strong offensive and defensive start to the second half, with Hughes scoring on the move on a jumper on the team's first possession of the half, followed by a block by Chukwu at the other end, and a zip pass from Howard to Hughes that Hughes used to knock down his fourth deep shot of the contest.

Buddy Boeheim would get involced on the outside as well, making back-to-back three-pointers to bring the Orange from down two to ahead four, at 43-39. Boeheim's first of these two deep shots gave Syracuse their first lead since 8-7 in the first half. Syracuse was without the lead from the 16:11 mark of the first half to the 17:18 mark of the second half, a span of 18 minutes and 53 seconds.

A jumper by redshirt-junior guard Malik Ellison followed by a turnover by Boeheim that resulted in a dunk by Xacier Johnson would tie the game at 43 apiece.

Immediately following the tie, Hughes would connect on his fifth deep ball of the game to give the Orange a 46-43 lead.

Shortly after, Howard would make his third shot from beyond the arc in the contest to move Syracuse out to a two-possession lead, at 49-43.

Hughes would try for another three and miss, but Boeheim would get underneath to grab the offensive rebound. He would rebound his own miss while getting banged around, and go up again, making the basket and the free throw that went with it to give the Orange a 52-43 advantage, on a 9-0 run.

Syracuse got out to their first double-digit lead of the contest when Chukwu got an offensive rebound that ended with the ball bouncing inside the nylon. Chukwu made the old-fashioned three-point play, placing the Orange ahead 57-46.

With under eight minutes to play, Chukwu had seven points, eight rebounds, and six blocks, with a rebound-point tandem coming off of his positioning on a miss by Boeheim that gave Syracuse a 60-51 lead.

Sophomore forward Marek Dolezaj would feed Howard, who connected on his fourth three-point basket of the game, giving him 14 points and the Orange a 64-51 advantage at the 3:54 mark of the second half.

Less than a minute later, Dolezaj would make his own jumper, moving the Orange out to a 66-52 lead.

Chukwu would foul out of the game on the defensive end with 1:30 to play, ending the night with seven points, nine rebounds, and six blocks. He was 3-for-3 from the charity stripe.

In the absence of Battle, Boeheim finished with 20 points, Hughes and Howard with 18.

Buddy Boeheim secured a new single-game career-high, with those 20 points in this contest.

This Round 2 victory inside the ACC Tournament advances the Orange to a meeting with the Blue Devils of Duke in the Quarterfinals.

This will be the third meeting of this season between Syracuse and Duke.