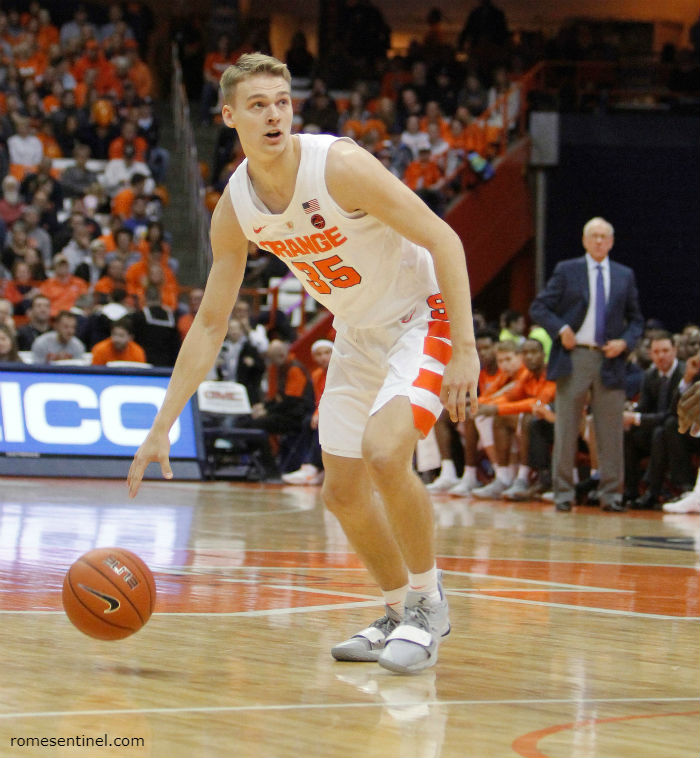 In their 75th meeting all-time, the Syracuse Orange and Boston College Eagles started out slow.

After two made free throws following Sidibe's first foul just 18 seconds into the game, the score was 4-3 Orange.

Ky Bowman came off the bench and connected on back-to-back jumpers, the second from beyond the arc, giving Boston College the lead back, at 8-7.

But redshirt-junior guard/forward Elijah Hughes answered right back with a three of his own, grabbing the advantage back immediately, at 10-8 Syracuse.

Battle would rattle one home shortly after, giving him six of the first 12 points scored by the Orange, ahead 12-8.

The Eagles would fight their way to a tie at 12-12, with junior forward Nik Popvic accounting for both buckets.

Sophomore forward Marek Dolezaj's layup would break the tie, but senior guard Jordan Chatman would tie and take the lead with three free throws after getting fouled beyond the arc, taking the lead at the 7:22 mark, at 17-16.

True freshman shooting guard Buddy Boeheim would take the lead back on the very next Syracuse possession, knocking down a three, his first points of the game, followed by a three by Dolezaj.

Later on in the first half, Boeheim would account for eight straight points scored by the Orange, making two free throws followed by two shots from beyond the arc, giving the Orange a 30-21 advantage. He would end the first half with 11 points.

Sophomore forward Oshae Brissett would give Syracuse their first double-digit lead of the contest, at 31-21, resulting from a 1-for-2 trip to the line.

Boston College was the first to score coming out of the break, with Popovic making both of his freebies, making it a two-possession game, 31-26.

Hughes would account for Syracuse's first field goal and points of the second half, going to the rim for two at the 18:51 mark.

Senior point guard Frank Howard would follow with his first points of the match-up, a three that would roll the Orange back out to a double-digit lead, at 36-26.

At the 14:06 mark of the second half, Boeheim had achieved a new single-game, career-high in scoring, with 14 points, out-doing his previous high of 13 points. He rose to 14 points on a three in the second half, after scoring his 11 aforementioned points in the first half of play.

Boeheim's original single-game, career-high of 13 points was accumulated at home versus the PIttsburgh Panthers and on the road against the Boston College Eagles, giving him his best and second-best totals both versus Boston College.

It was a 10-point game again at 47-37 after the three in the corner from Bowman, but Battle quickly answered by attacking the rim and completing the old-fashioned three-point play to elevate the Orange up to a 50-37 lead.

Battle and Brissett would combine to account for 17 straight Syracuse points that would bring the Orange out to a 20-point advantage, 60-40, with 7:58 to play.

True freshman point guard Jalen Carey would check in at the 7:58 mark with the Orange ahead by 20. In one minute and 42 seconds of play, he amounted one turnover and no other stats.

Boston College would go on a 14-0 run, with four total players accumulating points, bringing the Syracuse 20-point lead down to six, 60-54, with 3:54 to play.

The Orange would end their scoring drought when Battle went 1-for-2 at the charity stripe at the 3:39 mark, giving Syracuse their first points in almost five minutes.

Boeheim got the Orange back to a double-digit lead, at 67-56, when he made both of his attempts from the line, at the 1:17 mark. His new single-career high rose to 16 points after these free throws.

Syracuse did not make a field goal from the 8:14 on, with their final seven points coming at the charity stripe.

Battle would lead all in Orange with 21, followed by Boeheim's career-high of 16, and Brissett's 12.

Boyman would equal Battle, leading the Eagles with 21, followed by Chatman's 12, and Popovic's 10.

Syracuse improved to 17-7 on the season, 8-3 in the Atlantic Coast Conference (ACC).