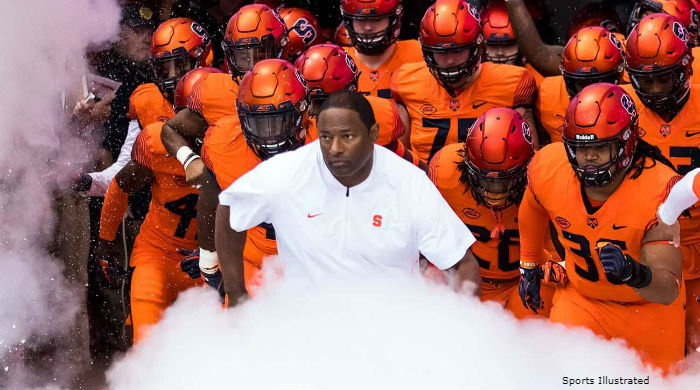 The Camping World Bowl served as a place where the rivalry could be renewed between the Syracuse Orange and West Virginia Mountaineers.

Syracuse leads the all-time head-to-head record, 33 wins to 28 wins, and are currently on a three-game winning streak versus West Virginia, with their last victory over the Mountaineers coming in the Pinstripe Bowl of 2012.

But Syracuse's offense would have another three-and-out after senior quarterback Eric Dungey was sacked by redshirt-junior cornerback Keith Washington, Jr., on third down.

On their first two drives of the game, the Orange combined to have -11 yards of offense.

With just over 10 minutes remaining in the first quarter, the Mountaineers would attain the initial first down of the contest by either team. when redshirt-sophomore quarterback Jack Allison found senior wide receiver David Sills, V.

Sophomore wide receiver Tevin Bush would take a handoff from Allison, coming across shortly after, and head upfield for a 20-yard gain to the Syracuse 16-yard line.

A sack by senior linebacker Ryan Guthrie would move the Mountaineers back six yards.

Redshirt-sophomore wide receiver T.J. Simmons would get West Virginia back in the Syracuse redzone on a 17-yard play that began with his reception, and the Mountaineers would send a 28-yard attempt through the uprights on fourth down, courtesy of redshirt-sophomore kicker Evan Staley. With 6:42 remaining in the first quarter, West Virginia had struck first, ahead 3-0.

The Orange would gain three first downs on the first five plays of their third drive after not recording a single first down on their first two drives. Redshirt-senior wide receiver Jamal Custis would reel in a pass for the team's initial first down of the game, followed by junior running back Abdul Adams' carry for a first down and then true freshman wide receiver Taj Harris' 19-yard catch-and-run that rolled the Orange to the Mountaineers' 49-yard line.

Dungey would air it out downfield to Custis in single-coverage for a 44-yard gain on a heave that moved Syracuse to the West Virginia 3-yard line.

Adams would be given the ball on three straight carries to follow, with Adams gaining his first touchdown as a member of the Orange on 3rd-&-goal from four yards out; he ran straight forward and fell onto his defender. Due to the fact that his knees never touched the ground, Adams was still alive and had the wherewithal to reach forward for the final yard. At the 3:01 mark of the first half, three minutes and 41 seconds after the Mountainners gained the first lead, the Orange got theirs, ahead 7-3.

West Virginia would punt the ball away for the second time in three drives, giving Syracuse another opportunity at points, now late in the first quarter. However, the Orange offense would gather back-to-back penalties to start the drive and Dungey would be intercepted by sophomore safety Kenny Robinson to end the first quarter.

The Mountaineers, coming off of the interception, began the second quarter on the 16-yard line of the Orange.

Junior running back Kennedy McKoy would make the most of this drive that began on an interception by darting toward and into the end zone from three yards out on a play that featured a lot of moving parts to create disruption. With 13:52 left in the first half, West Virginia had regained the lead, now ahead 9-7 after Staley bounced his extra point attempt off of the right goal-post.

Following junior running back Moe Neal's first carry of the game, which went two yards, Dungey would be sacked for a loss of 12 yards, courtesy of redshirt-junior linebacker Shea Campbell. On 3rd-&-20, Dungey would find Custis but offsetting penalties would negate the catch and instead replay the 3rd-&-20 down. Dungey would scramble on 3rd-&-20, gaining three yards to his own 18-yard line before the Orange punted for the third time on their first five drives of the first half.

The Mountaineers would elect to go for it on 4th-&-3. Allison would complete the pass to Simmons, but the officials' measurement would show that West Virginia was about a football's length away, giving the Orange the ball at their own 38-yard line.

Dungey would gain nine yards on a keeper to begin the team's sixth drive of the game, and a roughing the passer penalty would follow immediately to move the Orange to the Mountaineers' 38-yard line.

A targeting penalty on Kenny Robinson, Jr., would result in his ejection with a little over nine minutes before the break. Robinson had lowered his head and angled it downward to the helmet of Harris who was on the ground. Harris' reception on the play ended in an 8-yard gain and the targeting penlaty tacked on another five yards to put Syracuse on the West Virginia 5-yard line.

Back-to-back runs by Adams would do it, with Adams gaining four on the first and the one remaining yard on his next carry, placing the lead back in the hands of Syracuse, 14-9, with 8:30 before half.

On the first play of their sixth drive of the contest, Mountaineers' junior running back Martell Pettaway ran through a wide-open lane and showed his speed, going 51 yards, shedding a defender in the process, moving to the 24-yard line of the Orange after beginning the drive on his own 25.

Staley ended this drive with a 36-yard field goal, at almost the exact same time as when he connected on a field goal in the first quarter (6:33 mark of the second as opposed to the 6:42 mark of the first), bringing West Virginia within two, 14-12.

Dungey would get a first down after back-to-back runs to start their next drive, followed by Neal bursting through a hole in the line for 22 yards, placing the Orange on their own 44-yard line.

However, Dungey would continue to focus on calling his own number and run two more times on the drive, a total of four keepers, with the last two combining for a loss of three yards and resulting in the team's fifth punt of the first half.

A sack by junior defensive end Kendell Coleman would amount to a loss of nine yards for Allison and the Mountaineers who would eventually punt on this drive, giving Syracuse the ball ahead 14-12 with 59 seconds before half.

Both teams combined for a total of nine punts in the first half, West Virginia with four and Syracuse with five. Each team would have at least one turnover in the first half as well, the Mountaineers on downs and the Orange on two interceptions thrown by Dungey.

The last Orange possession of the first half ended due to Dungey's second interception of the game.

West Virginia began the second half with a nine-play scoring drive that concluded with a 44-yard field goal by Staley to give the Mountaineers a one-point lead on the Orange, 15-14, with 10:11 left in the third quarter. Kennedy McKoy ran the ball five times on this drive for a total of three yards, while Allison went 3-for-3 for 45 yards, including a 34-yard pass play to Bush.

Saving the day on 3rd-&-2 of Syracuse's first drive of the second half was redshirt-freshman tight end Aaron Hackett, who caught a pass that ended in a 26-yard gain to the West Virginia 41-yard line. It was only his second collegiate catch, with his first being for a touchdown in the 44-37 overtime loss on the road to rival Pittsburgh Panthers earlier this season.

The Orange would get as far as the West Virginia 21-yard line on this drive, bringing in Lou Groza Award Winner, redshirt-freshman kicker Andre Szmyt, in for a 39-yard attempt. The nation's top kicker would boot it through, giving the lead back to the Orange, 17-15, with 6:16 left in the third quarter.

Staley would hit the right upright on the Mountaineers' next drive, just as he did in the first half. But unlike that first-half extra-point attempt that fell outside, this bounce off the right upright placed the ball inside the goal-posts, giving West Virginia an 18-17 lead with 3:23 to go in the third quarter.

At the start of the fourth quarter, Syracuse continued their drive from the West Virginia 13-yard line. Junior wide receiver Trishton Jackson, who had transferred from the Michigan State Spartans, caught a pass from Dungey in single-coverage in the end zone for his first touchdown in orange. With the score, the Orange regained the lead, 24-18, with 14:54 remaining in the game.

Sophomore defensive back Allen Stritzinger attained his first collegiate inteception on a ball that went off the arm of a Mountaineer on a reception attempt, giving Syracuse the ball right back on West Virginia's first play of the drive that followed Syracuse taking back the lead. Stritzinger returned the interception 20 yards to the West Virginia 18-yard line and Szmyt sent a 34-yard field goal in between the yellow goal-posts to extend the Orange out to a 27-18 advantage with 12:55 to go in the game.

Following consecutive scores by the Orange, Coleman would get his second sack of the game, this forcing a punt by the Mountaineers that gave the possession back to the Orange with 11:36 to play. This, like his first sack on Allison, was also for a nine-yard loss.

The Orange would capitalize on the forced punt, with Dungey eluding a sack attempt and tossing it up on a prayer that was answered by Neal who reeled the ball in, made moves in traffic, regained his balance, and ran for what ended as a 42-yard catch-and-run. True freshman running back Jordan Howard would grab the four yards needed on the very next play, elevating the Orange to a 34-18 advantage with 9:59 to go.

West Virginia would take nine plays all the way to inside the Syracuse 10-yard line, but the Orange would thwart their plans at getting a score when Guthrie wrapped up redshirt-senior tight end/fullback Trevon Wesco on fourth down to take over possession with 6:12 to play, ahead by 16.

With around two minutes to play, Coleman amounted his third sack of the game, and this paralleled the first two, with all three sacks being for a loss of nine yards.

Four straight incompletions by Allison gave the ball back to the Orange with under a minute to go and they would kneel down and rise up for a win over the rival Mountaineers, 34-18.

Syracuse is now 34-28 in head-to-head match-ups with West Virginia and have won the last four consecutive contests.

In the game, Harris would reach and pass Syracuse wide receiver alum Shelby Hill for most receiving yards in a season by a Syracuse true freshman, moving ahead of Hill's previous record of 558 receiving yards as a freshman.