The Orange Roll to Victory Over Rival Eagles 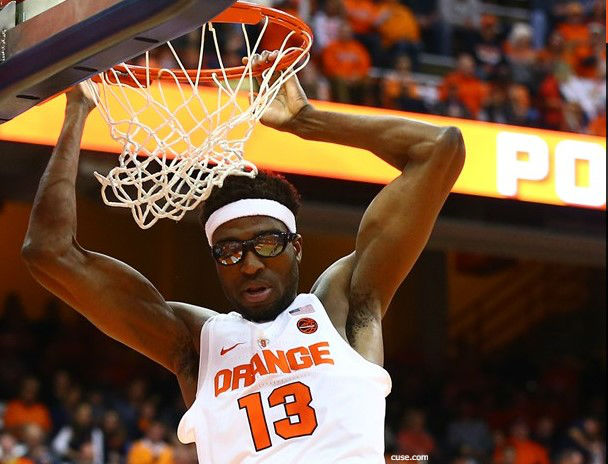 The longtime rivalry that carried over from the old Big East Conference into the Atlantic Coast Conference (ACC) was center stage... well, center court... when the Syracuse Orange played host to the Boston College Eagles.

Both teams came into the match-up with 13 overall wins, while each being under .500 in the ACC, Syracuse at 2-4 and Boston College at 3-4. A victory for the Orange would leap-frog their squad over the Eagles in the ACC standings, while a win for the Eagles would keep the Orange residing in the basement of the ACC.

The squads remained close with one another to open the game, tying at 2-2 and 5-5 early on, before Boston College went on a 9-2 run that began with a make from beyond the arc by sophomore guard Ky Bowman.

Syracuse would respond with their own run, 7-0, that would bring about the third tie of the first half, at 14-14, with the tying two points coming from a layup by junior point guard Frank Howard.

That layup by Howard and the previous field goal by sophomore shooting guard Tyus Battle each came after junior center Paschal Chukwu halted tries by Boston College at the rim.

Chukwu would jump into and through the Eagles' bench and then out into the crowd trying to save possession for the Orange, showing his early tenacious play continue.

Syracuse would attain their first lead with 11:41 left before halftime off of a three-point make by true freshman forward Oshae Brissett that brought the score to 19-18 in favor of the Orange.

Bowman would take the lead back quickly when he went 2-for-3 from the charity stripe after being fouled attempting a three.

At the break, Syracuse led Boston College by 10, 47-37, after Chukwu cleaned up a Howard miss from deep with a putback in front of the rim with under three seconds to go.

The Eagles launched the ball at the end of the half and it fell through the nylon from three-quarters court away, but the shot was not counted because it was ruled to have come after the game clock had expired.

Bowman got the Eagles on the board first in the second half, but the Orange countered with an 11-0 run, with Dolezaj achieving back-to-back makes inside, followed by a three-point field goal and then a jumper by Battle, and then a field goal at the rim by Chukwu. This string of points would elevate the Orange to a 58-40 lead with 15:12 remaining.

Bowman and junior guard Jerome Robinson would combine to score the next 13 points for Boston College, but Syracuse would refuse to rescind the lead en route to an 81-63 victory. Once they took their second lead of the game at 21-20 with 10:50 remaining in the first half, Syracuse would never let it out of their hands, holding the advantage for the final 30 minutes and 50 seconds of the game.

Chukwu was impressive on the offensive end, finishing with 14 points, on 6-for-7 shooting and going 2-for-2 from the line, which he added to his seven rebounds (4 offensive, 3 defensive) and two blocks.

Howard came out with 1:37 remaining, ending his night on the floor with 18 points, six assists, three rebounds, and not a single turnover.

Chukwu and Howard would join a group of five Syracuse players that would attain double-figures in scoring, with Battle atop all Orange with 24 points, followed by Howard's 18, Chukwu's 14, Brissett's 13, and Dolezaj's 12.

Boston College concluded the contest 21-for-44 (47.7%) from the field, including making 47.8% of their shots from beyond the arc (11-for-23). Bowman and Robinson each played all 40 minutes of the game for the Eagles, Bowman finishing with 20 and Robinson with 21, combining to score 41 of the team's 63 points.

With the win, the Orange move to 14-6 overall while the Eagles head to 13-7. Inside the ACC, this win rolls the Orange past the Eagles in the standings, with Syracuse at 3-4 and Boston College at 3-5.

After losing four straight conference games, the Orange are now on a two-game winning streak inside the ACC, with back-to-back wins over historic rivals, the Pittsburgh Panthers and the Boston College Eagles.