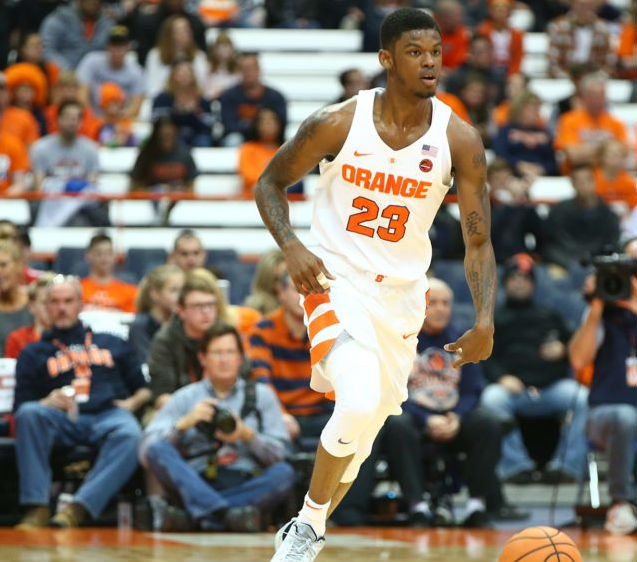 The 112th contest between the Syracuse Orange and Pittsburgh Panthers men's basketball programs took place inside the Carrier Dome on a cold, wintery night here in mid-January.

Orange junior point guard Frank Howard got things started early with a deep shot to make it 3-0 in favor of the Orange.

Fellow point guard, true freshman Howard Washington, Jr., came in at the 13:47 mark and found redshirt-freshman forward Matthew Moyer inside for a lay-in. He followed his assist with a defensive rebound immediately after.

With about 11:30 before the break, Syracuse true freshman forward Oshae Brissett's three made it 14-9 Orange.

The three-point make by freshman guard Parker Stewart at the 8:01 mark of the first half ended a combined scoreless drought in the game of exactly three and a half minutes.

Syracuse would conclude their individual offensive drought after almost five full minutes without a single point when Frank Howard connected on a three-point attempt with 6:48 before halftime, off of a missed jump shot by Tyus Battle, that brought the game to a 17-12 lead for the Orange.

Moyer would attack the rim with a strong move down the baseline, and the ball would bounce in, providing a spark to continue separation for Syracuse, getting out to a 19-14 advantage.

But Pittsburgh would indeed take over the lead for their first time in the game with 4:22 left in the first half, at 22-19, courtesy of sophomore forward/center Kene Chukwuka's three-point make.

Brissett then took the ball in the lane, facing his opponent and elevating for the one-handed make, bringing the game to 22-21 Panthers.

A little over a minute later, Orange sophomore shooting guard Tyus Battle stayed with the ball and kept possession, going to the rim for a tough two with 1:42 before the break. This first field goal of the game by Battle gave the lead back to the Orange, at 23-22.

Battle would head into the lane for yet another tough make, cashing in before the halftime buzzer, to give the Orange a 27-22 advantage at the break. After starting the game 0-for-6, Battle finished the first half 2-for-2.

Then, like the first half, Syracuse fell into an offensive drought of over three and a half minutes, beginning after Brissett's connection from beyond the arc at the 15:38 mark. The Orange offensive drought would stretch to at least five minutes, reminiscent of the first-half struggles, and would end after five minutes and 38 seconds when Howard went 1-for-2 from the line with 10:04 remaining.

Syracuse's drought without a field goal in the second half would span a total of six minutes and seven seconds from the 15:38 mark to 9:31 remaining, when Howard would aid the offense once again, attacking the rim for two to give the Orange a 39-35 lead.

Battle would follow by connecting from long range after beginning the game 0-for-4 from distance, and Howard would get three himself, but in the old-fashioned way, with the shot and the free throw, providing the Orange their first double-digit lead of the game at 10 points, 45-35.

The feed from Syracuse true freshman forward Marek Dolezaj to junior center Paschal Chukwu down low left Chukwu with a wide open look at the rim, which he gladly took advantage of with a two-handed slam to bring the Orange back ahead 10, 47-37, with 5:13 to play.

Syracuse would hold on from there, going on a 12-6 run to finish the game with a 59-45 victory, securing an end to their losing streak at four games.

The Orange are now 2-4 in the Atlantic Coast Conference (ACC), while the Panthers remain as the only ACC team without a conference win at 0-6.

With the win, the Orange now have a 67-45 record head-to-head against their historic rival the Panthers in 112 games.