The Jaguars Are Moving On 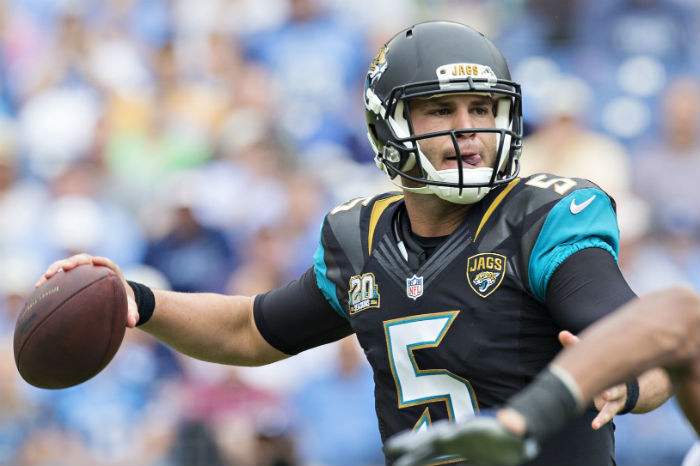 If you were writing home about the Buffalo Bills at Jacksonville Jaguars' first half at EverBank Field in Jacksonville, Florida, there would not be much to write about.

LeSean McCoy led all rushers for the Bills in the first half with 36 rushing yards, while Jaguars' quarterback Blake Bortles was one yard shy of matching McCoy, ending the opening half with 35 yards to lead Jacksonville.

Down 3-0, Bortles reached field-goal range for the Jaguars off of two very late first half runs, one for 20 and the following for 12 to help set up kicker Josh Lambo, who booted it through from 44 yards away with two seconds before the break.

Steven Hauschka's 31-yard field goal had given the Bills the first lead by either team in the game before Lambo's tying field goal.

Both teams combined to go scoreless for the first 28 minutes and seven seconds of the game before Hauschka's field goal guided through the uprights with 1:53 remaining before the half.

On their first drive of the second half, the Jaguars achieved a 16-yard gain off of a pitch to running back Leonard Fournette. Bortles went right back to him on the next play, this time for a short pass that turned into a 12-yard gain, and back-to-back first downs.

Tight end Marcedes Lewis would catch a pass over the middle for a 16-yard gain to Buffalo's 29-yard line for yet another first down on this drive, following a short run up the gut by Fournette.

Bortles would survey the field and then take off on consecutive plays, grabbing a first down that ended inside the Bills' redzone.

Fournette would try rushing up the middle on back-to-back plays, but Buffalo would keep him out. So, Jacksonvvile head coach Doug Marrone elected to go for it on fourth down with a yard to go and getting the Bills to respect the run on that drive aided in Bortles finding tight end Ben Koyack over the middle for the first touchdown of the game by either side. Koyack's score would give Jacksonville their first lead of the game, at 10-3 with 48 seconds remaining in the third quarter.

On this scoring drive, the Jaguars gained 86 yards on 15 plays, taking eight minutes and 52 seconds off the clock in a huge time-eating possession.

The Bills punted away their first two drives of the second half.

On the Jaguars' third possession of the second half, Bortles threw toward five Bills' players and safety Colt Anderson dove for it, but did not come up with the takeaway. However, Buffalo pressured Bortles on third down and forced a punt, attaining possession with 8:29 left to play in the game and Anderson leaving the game with a shoulder injury.

During the ensuing Buffalo drive, Taylor would find tight end Charles Clay on a big-time play to keep the team's drive alive, but after review, the officiating crew deemed that Clay was out-of-bounds before catching the ball and did not reestablish himself. Linebacker Myles Jack would sack Taylor on the next play to force a punt with 5:50 left on the clock, sending the ball back to Jacksonville.

Bortles took a low snap that went into the ground on the following drive and turned it into a 19-yard gain, but no score would come of the drive. Jacksonville did, however, force Buffalo to punt for the fourth time in the second half and eventually use all of their timeouts before the two-minute warning.

With 1:51 to play, the Bills began their fifth drive of the second half, after punting away the previous four. During the drive, Jaguars' defensive end Dante Fowler, Jr., would sack Taylor on third down and Taylor would be on the ground for awhile, seemingly with a concussion, but was able to walk off the field with some help.

Backup quarterback Nathan Peterman would come in and gain a first down for Buffalo.

Then came Jacksonville cornerback Jalen Ramsey who would attack the route and come up with the interception on Peterman that clinched the victory for the Jaguars, 10-3, over the Bills in the AFC Wild Card.

The Bills would fail to score a single point in the second half, and would not find the end zone in the entire 60 minutes against the Jaguars' tenacious defense.

Bortles would conclude the game with 88 yards rushing to 87 yards passing, becoming only the fourth quarterback in NFL history to win a playoff game with more rushing yards than passing yards as a quarterback.

The Jaguars improve to 6-0 at home at EverBank Field in their 2017-18 campaign since starting the season 0-2 at home.

Jacksonville will head to Pittsburgh to meet the 2nd-seeded Steelers in the AFC Divisional Round on Sunday, January 14th.