Understaffed Irish Come Out with W in Syracuse 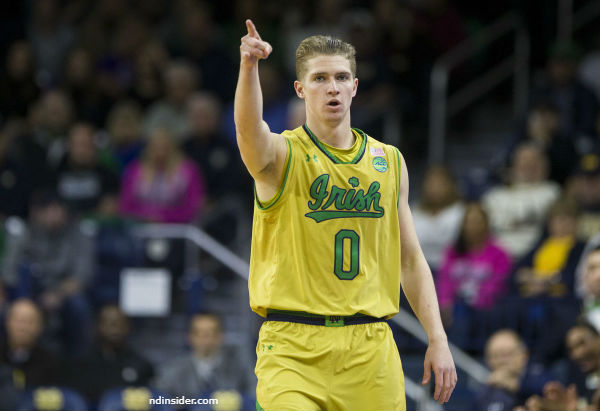 You would think that would create an advantage for the Orange.

Thanks to out-scoring Syracuse 24-16 in the first 16 minutes of the second half, Notre Dame trailed by only one, 44-43, with exactly four minutes to play.

With 2:25 to play, the Irish gained their first lead since 1-0, when sophomore guard T.J. Gibbs connected on both of his free throws to make it 45-44 Irish, off of a foul by Orange junior point guard Frank Howard which followed a turnover by Howard.

Syracuse was not done, as depicted when sophomore shooting guard Tyus Battle scored from long range coming out of a timeout, to knot things up at 49 with, ironically, 49 seconds to go.

But the "every man for himself" offensive style backfired on the Orange when Battle lost the handle on a potential game-winning try and senior forward Martinas Geben took the ball downcourt for the Irish with four seconds to go.

Geben would miss the layup try, but his teammate, junior guard Rex Pflueger, cleaned up, putting the ball back up and in with two seconds to play.

Pflueger made the headsy play by following Geben to make sure someone was there to try again if Geben was to miss it.

Syracuse, did not, failing to grab the defensive rebound or box out any Notre Dame players attempting to gain the offensive board. The Irish finish was fitting, with them out-rebounding the Orange on the offensive glass 21 to eight in the game overall.

Both teams came in at 12-3, with Notre Dame coming out at 13-3 while Syracuse fell to 12-4. The Irish remain undefeated in conference play inside the Atlantic Coast Conference (ACC) at 3-0, whereas the Orange have a losing record inside the ACC for the first time this season, at 1-2, on a two-game losing streak after falling to the Wake Forest Demon Deacons on the road and now the Irish at home.

Gibbs led all Notre Dame players with 18, followed by Pflueger with 12. They combined to account for 30 of the team's 51 points in the game.

Syracuse forward Oshae Brissett attained his eighth double-double of his true-freshman season in this game. That makes eight in 16 games, meaning that 50% of the time, Brissett is grabbing at least 10 rebounds to go with at least 10 points.