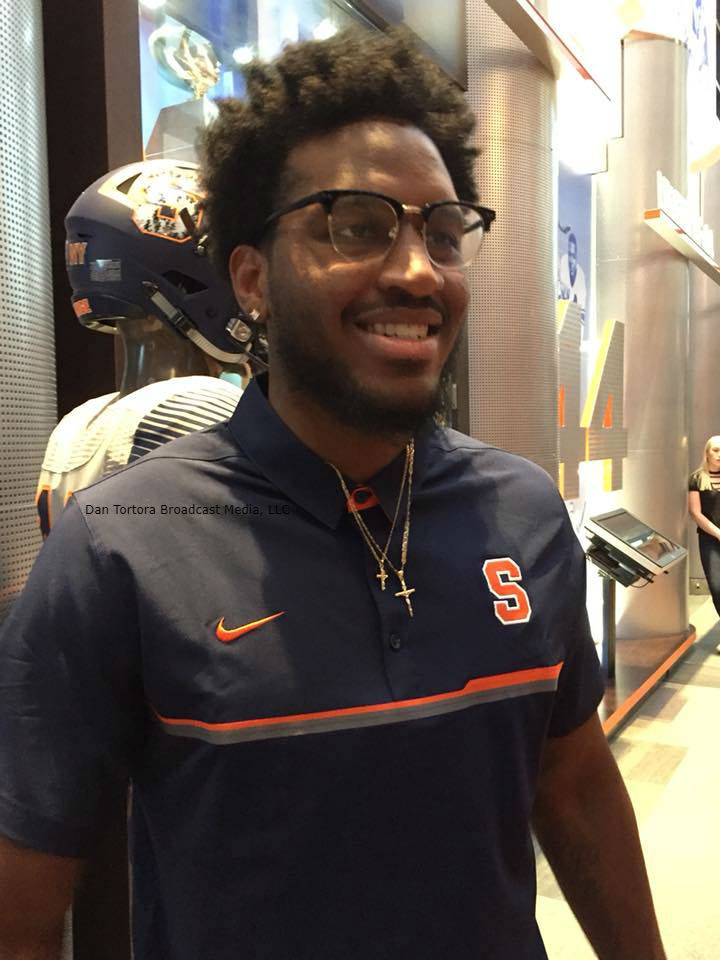 On Senior Day, the Syracuse Orange football team looked to finish the season strong for the 14 student-athletes that were either seniors or redshirt-seniors on the squad.

At the half, they trailed the visiting Boston College Eagles, who brought a loud crowd along with them, 28-14.

Taking matters into his own hands, senior wide receiver Steve Ishmael gave Syracuse some bright moments, including scoring the team's first touchdown on a crossing route, where he caught the ball and then preceded to outrun the Eagles into the endzone for a 37-yard scoring play, which tied the game at 7-7 in the first quarter.

He, then, came down with back-to-back big-time receptions in the second quarter, the first a 12-yard gain for a new set of downs and the second a 44-yard grab on the sideline for another first down, this one in the redzone of Boston College at their 17-yard line. These plays aided in Syracuse getting down the field for a score from fellow senior wide receiver Erv Philips for the remaining 17 yards on the next play.

Ishmael ended the first half with 128 yards on six catches to go with his score.

His six catches rose him to triple digits in 2017, with 100 receptions in a single season for the first time in his collegiate career.

With 1,288 on the season, Ishmael came into the second half needing 195 yards to become the single-season leader in receiving yards at Syracuse, a feat achieved by his former teammate, wide receiver Amba Etta-Tawo, who reached 1,482 receiving yards in his lone season with the Orange (2016).

Finding Ishmael in the first half was not starting quarterback, junior Eric Dungey, nor was it two-year backup quarterback, senior Zack Mahoney.

Instead, it was redshirt-freshman quarterback Rex Culpepper in his first collegiate career start.

Culpepper came into the game having completed 21 of 41 passes for 238 yards, with no touchdowns and two interceptions this season, having come in for Mahoney at times.

Less than 10 minutes into his first start, Culpepper threw his first collegiate touchdown pass, the aforementioned 37-yard play to Ishmael with 5:26 remaining in the first quarter. He went into the half with 16 completions on 20 attempts, with 202 passing yards, two touchdowns, and one interception.

But the Tampa-2, in its second season in existence under defensive coordinator Brian Ward, failed to half the opposing offense once again, giving up at least one score in all four quarters. Syracuse allowed freshman running A.J. Dillon two rushing touchdowns in the first quarter alone. He had two rushing touchdowns through four quarters versus the UConn Huskies a week ago. Dillon's touchdown runs were for 22 yards and eight yards, respectively.

In the second quarter, Syracuse's defense gave up a 64-yard touchdown run to former Boston College quarterback Jeff Smith, which elevated the Eagles to a 21-7 advantage.

Then, the defense of Boston College recovered a backward pass attempt by Culpepper when junior defensive back Will Harris grabbed the ball and ran it into the endzone from 30 yards out. The ruling of a backward pass and fumble recovery for a touchdown was reviewed and upheld by the officials.

Boston College would run off over three minutes to start the third quarter, scoring on the ground for a third time on Dillon's third rushing touchdown of the game, this from a yard out, giving the Eagles a 35-14 advantage with 10:57 remaining in the third quarter.

On 4th-&-1 to start the fourth quarter, Culpepper handed off to true freshman fullback Chris Elmore for no gain, resulting in the Orange turning the ball over on downs. Syracuse would not score a single point in the second half.

With 12:37 remaining in the game, the Eagles capitalized on the turnover on downs by the Orange by scoring their first receiving touchdown of the game when redshirt-senior quarterback Darius Wade found freshman running back Travis Levy on the sideline who rushed forward and then cut in for a 46-yard touchdown that made it 42-14 Eagles, souring high on the road against their longtime rival.

Syracuse still leads the all-time head-to-head battle, 30 wins to 20 wins over Boston College, but the Eagles break the two-game winning streak by the Orange in the series, making sure that the trifecta did not occur.

The Orange end their second season under head coach Dino Babers the same way they concluded the first under Babers, at 4-8 with no advancement to a bowl game.