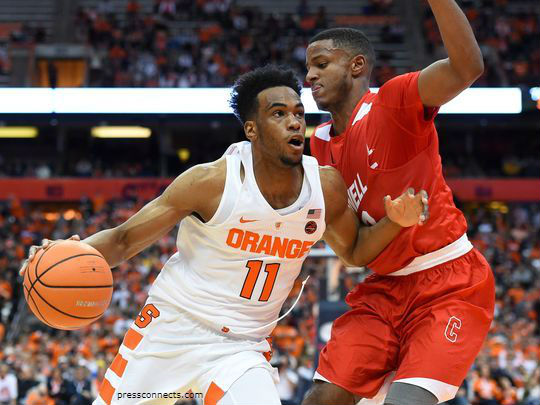 The Syracuse Orange enter this season with many wanting to know who they will be.

They came out of their first regular season match-up looking the part of teams that have come before, with a 30-plus point victory over in-state rival, the Cornell Big Red, 77-45.

The difference is that this team entered onto the court with five new faces and six overall on the floor who had never played a game for the Orange before.

Syracuse's true freshmen all had a hand in this victory over Cornell, with forward Oshae Brissett (pictured above) finishing with a double-double in his collegiate debut, grabbing 10 rebounds to go with 11 points, while center Bourama Sidibe ended with seven points, six rebounds, two blocks, and two steals. Forward Marek Dolezaj got a healthy five rebounds offensively, had six rebounds in total, to go with eight points, a block, a steal, and an assist. Point guard Howard Washington, Jr., was quiet offensively, attempting one shot in 10 minutes, but contributed with two assists and one steal while not committing a single turnover.

Redshirt-freshman forward Matthew Moyer reeled in 10 rebounds, grabbing eight boards on the defensive end, while scoring four points, stealing possession away from the Big Red twice, and dishing out one assist.

Graduate transfer guard Geno Thorpe came on late. After going 1-for-7 in seven minutes played in the first half, Thorpe went 3-for-6 in 12 minutes in the second half, including back-to-back strong takes to the basket, one on each side of the hoop. He ended the game with three steals, two assists, and no turnovers to go with his 12 points in his first contest as a member of the Orange.

After gaining the lead at 6-5 with 15:13 remaining in the first half, Syracuse never looked back, thanks to the help of their newbies who combined to help the team start off with a foot in the right direction on a long road that lies ahead.