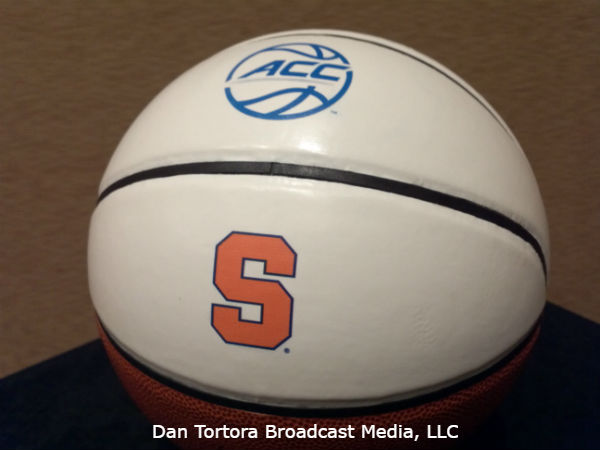 The game began as previously anticipated from my point of view, with the starters for the Syracuse Orange being junior Frank Howard at point guard, sophomore Tyus Battle at shooting guard, redshirt-freshman Matthew Moyer at small forward, true freshman Oshae Brissett at power forward, and junior Paschal Chukwu at center.

For this the opening game amongst this new Orange unit, play was sloppy and there seemed to be a lack of energy, as well as a lack of offensive rebounding.

By the 11:15 mark of the first half, all four true freshmen had checked into the game for the Orange: Brissett as a starter, Washington and Sidibe replacing Howard and Chukwu, respectively, and Dolezaj with 11:15 before half.

Dolezaj stole the ball with 10:24 to play in the first half and sent the ball underneath the basket to a waiting Battle, who dunked it home, providing a positive impression of him in less than a minute on the floor.

Howard, on the other hand, fell to the floor with the ball on multiple offensive possessions, struggling to have a strong handle early on.

Sidibe started out strong, going 4-for-4 from the charity stripe at the center position. He displayed tenacity and desire for the ball, punched the ball out of Southern New Hampshire's hands when they attempted to drive in on him, and went after the boards on defense. He had four points and four rebounds in eight minutes during the first half.

With approximately six minutes to play before the break, Brissett had back-to-back offensive rebounds and putbacks at the rim.

Battle scored 14 points in 15 minutes of play in the first half.

The first half saw all eight of Syracuse's active players get minutes; graduate transfer combo guard Geno Thorpe was inactive due to injury.

The second half began with Chukwu picking up his third and fourth fouls back-to-back, the first on defense and the second on the following Syracuse offensive possession. That led to Boeheim bringing in Sidibe only 38 seconds into the second half.

Conversely, Sidibe did not pick up his first foul in the game until the 17:15 mark of the second half, while still playing tough and attacking consistently.

With Chukwu getting fouled, hanging in the air, and making his right-handed shot in front of the basket with under 13 minutes to play, every Orange player had attained points, including all five that were experiencing their collegiate debut.

Syracuse would achieve 70 points around nine minutes remaining in the game, with Washington connecting on back-to-back three-pointers to get the Orange to 73 points. All of his three made shots from three-point range would come in the second half.

With 2:45 to play and the Orange ahead 82-43, Boeheim offered opportunities to the walk-ons, with senior forward Patrick Herlihy, junior guard Shaun Belbey, junior guard Ky Feldman, and junior guard Adrian Autry coming onto the court to join Sidibe.

Bourama Sidibe offered tenacity and intelligence underneath, getting after the ball while not getting into foul trouble. He finished the game with 10 points, eight rebounds (all defensive), and six blocks to go with a mere two personal fouls, playing in half the game (20 minutes). One area to work on would be the five turnovers he committed, but all-in-all, he had a strong presence on the floor in his first collegiate contest.

Oshae Brissett was a boost to the Orange offense, leading the four true freshmen in the incoming 2017 class with 17 points in 27 minutes, making 60% of his attempts from the field (6-for-10).

Howard Washington, Jr., offered a spark from the outside in the second half for a team that was 10% from long range in the first half, making all three of his deep shots in the second half. He would end the game 3-for-6 from deep and had 11 points in total to go with three rebounds (all defensive), two assists, and no turnovers.

Frank Howard scored 15 points in 24 minutes, but he also turned the ball over six times in the game.

The Orange concluded the game with 16 team blocks, with Moyer, Brissett, Chukwu, Howard, and Sidibe all negating at least one attempt by Southern New Hampshire.