Rams Take Over After Score-Happy Opening vs. Jaguars 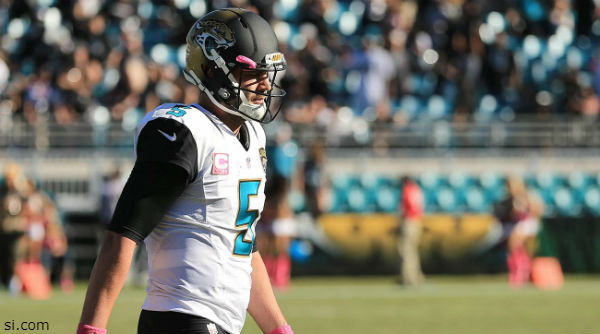 The Jacksonville Jaguars returned in Week 6 to the only place where they have yet to win this season: Home.

Jacksonville gained victories on the road at the Houston Texans and at the Pittsburgh Steelers, as well as overseas at Wembley Stadium against the Baltimore Ravens.

But, their lone game at home versus in-division rival, the Tennessee Titans of the AFC South, ended 37-16 in favor of the visiting Titans.

Now, six weeks into the season, the Jaguars had just their second home game at EverBank Field, hosting the Los Angeles Rams, with both squads coming in at 3-2 apiece after the first five weeks of the season.

Homefield was not well-protected to start, with Jacksonville giving up seven points in the first 14 seconds of the game, when Los Angeles' wide receiver Pharoh Cooper took the opening kickoff 103 yards to paydirt to go ahead 7-0 with 14:46 remaining in the opening quarter.

But the Jaguars would respond immediately, as running back Leonard Fournette would take the team's opening play from scrimmage, a direct hand-off, 75 yards for the score to tie the contest at 7 apiece. That means that 14 points were scored within the first 25 seconds of the game.

Over the past two off-seasons, the Jaguars made moves to bolster up their defensive line. Those moves paid off early on when defensive tackle Malik Jackson got to Rams' running back Todd Gurley, II, on 3rd-&-1 to force fourth down and a subsequent punt. Two drives later for Los Angeles, defensive end Calais Campbell sacked Los Angeles' quarterback Jared Goff for a nine-yard loss to force fourth down and a punt.

In between those drives, Rams' kicker Greg Zuerlein booted a 56-yard attempt through the uprights, moving the lead back to the Rams, now 10-7.

Jacksonville quarterback Blake Bortles would respond to losing the lead by gaining it right back, faking the hand-off to running Chris Ivory and then tossing a short pass to Ivory that Ivory would take in from 22 yards away to restore the Jacksonville lead, at 14-10.

With 22 seconds left in the first quarter, however, the Rams would take the lead for the third time in the game when tight end Gerald Everett took a "hot-potato pass" from Goff who was able to keep possession after the high snap. Everett ran forward from four yards out for the score that put the Rams ahead 17-14.

In the first quarter alone, 31 combined points were scored.

The second quarter would not mirror the first, ending with seven points scored combined for both teams, advancing Los Angeles out to their largest lead of the game, 10 points, ahead 24-14 at the break.

Los Angeles' only score of the second quarter came from special teams, meaning that two of their three first-quarter touchdowns came from the special teams' unit. This second-quarter score resulted from a blocked punt by Rams' outside linebacker Cory Littleton that running back Malcolm Brown scooped up and carried in from just outside of the Jaguars' end zone.

Fans booed their hometown Jaguars' offense as it slowed to a relative snail's crawl in the second quarter, absorbing no points despite the defense creating opportunities for them, two of those coming from Campbell who tipped the ball on a pass attempt by Goff that forced a punt and then a stop on 3rd-&-1 by Campbell on a Gurley rush attempt that brought about another punt by Los Angeles.

Jacksonville had an opportunity to put points on the board right before half, but placekicker Jason Myers went right from 54 yards away.

It was a tale of two quarters to begin the game, with Fournette achieving 100 yards rushing in the first quarter on a mere six carries, and then losing two yards in the second quarter to give him 98 rushing yards at halftime.

Jacksonville had outgained Los Angeles on the ground 100 yards to 25 yards in the first quarter, concluding the first half with 115 rushing yards to Los Angeles' 75.

But the gains of the offense in the second quarter did not bring about any gains on the scoreboard.

With 5:20 remaining in the third quarter, Myers connected on his second field-goal attempt of the game, this from 41 yards away, to bring Jacksonville within seven, 24-17.

This field goal did not come without its amusement, though. Myers went to try the field goal and an illegal formation penalty was called on the Rams. His second attempt at the same field goal was halted by a false-start penalty on the Jaguars. The third time truly was the charm as the kick got away and the flags remained in the pockets of the officials.

Myers' field goal was the first score for Jacksonville since the 6:51 mark of the first quarter, ending a scoring drought for the Jaguars that spanned 31 minutes and 31 seconds.

Campbell, who already had a sack, a tipped ball, and a stop on a rush attempt in the first half, all of which ended up forcing Los Angeles to punt, got after Goff again, sacking him late in the third quarter on the drive that followed Myers' field goal. The Jaguars would defend well in the secondary to follow Campbell's sack, which would result in yet another punt forced.

What once were boos late in the second quarter turned into cheers of "Let's Go Jaguars!" as the game rolled into the fourth quarter.

There was life in Jacksonville.

Rams' outside linebacker Robert Quinn decided to continue to tackle Fournette after the play, securing a penalty that would send the Jaguars to the Rams' 49-yard line.

From there, Jacksonville wide receiver Marqise Lee would reach overhead while facing Bortles to grab the ball that Bortles got out and away from trouble, moving the hometown squad to the Los Angeles' 28-yard line.

Just outside the Rams' redzone, however, Bortles would fumble on a quarterback keeper. Rookie left tackle Cam Robinson would fall on it immediately, but on the very next play, Bortles would throw out a little too far right of tight end Marcedes Lewis who reached out and touched the ball that ended up in the hands of cornerback Nickell Roby-Coleman for the Rams' interception.

That interception took a minimum of three points away from Jacksonville, and potentially what could have been the tying drive.

It was on the defense's shoulders once again to help the Jaguars remain in it, and they responded well, forcing 4th-&-20 and a punt.

Then, Fournette went down.

He tried to hop on one leg and fell to the ground, going out with a right ankle injury inside 10 minutes to play.

As expected, the Jaguars' offense stalled without Fournette, punting the ball away to the Rams who would capitalize by restoring their 10-point lead when Zuerlein made his second field goal of the game, this from 29 yards away to go ahead 27-17.

This contest went from 31 combined points scored in the first quarter to seven from Los Angeles in the second, three from the Jaguars in the third, and three from the Rams in the fourth. The two teams combined to accumulate 13 points over the final three quarters of the game.

Jacksonville's defense continued to offer opportunities, but Bortles struggled late, misfiring on pass attempts and the loss of Fournette took away a trust in the rushing attack.

Bortles finished with 23 completions and 12 incomplete passes, with 241 passing yards, and an interception to go with his lone passing touchdown.

The Jaguars finished with another home loss, now 0-2 at home this season, heading to 3-3 overall through the first six games.