Syracuse Challenged, But Did Not Upset, LSU 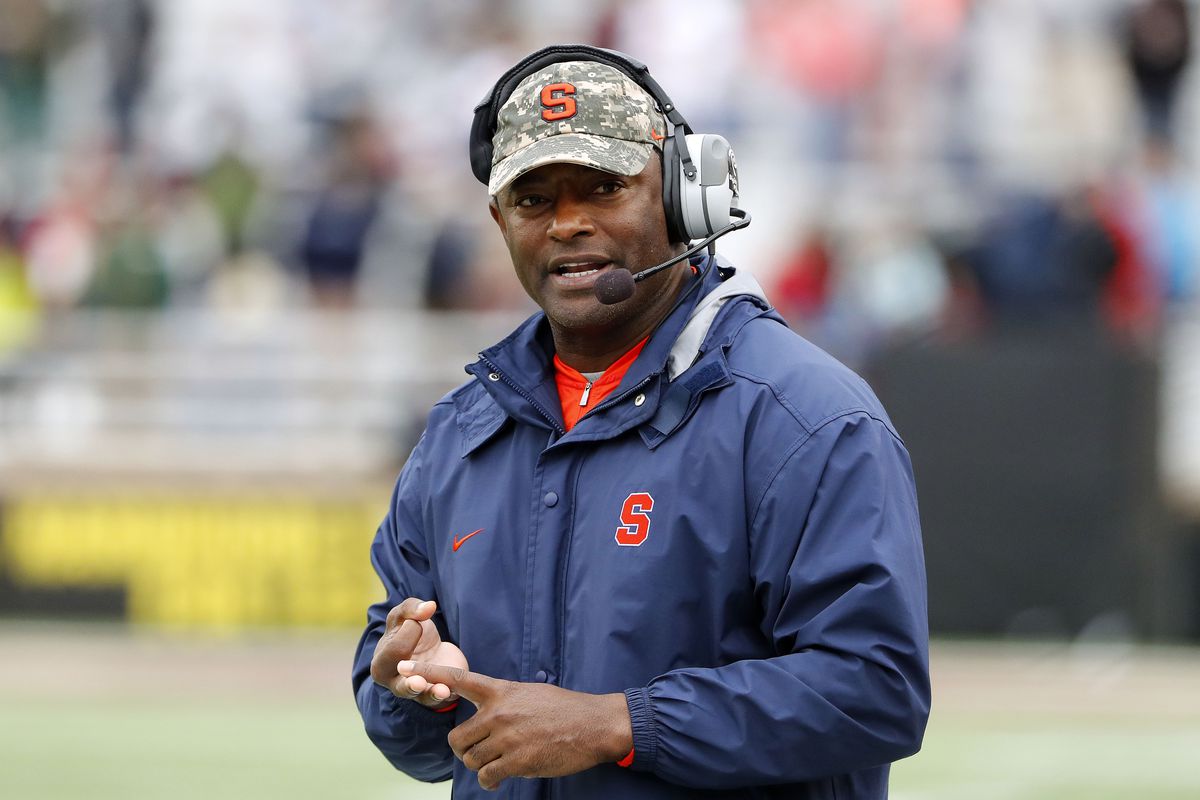 The Syracuse Orange, on their first road trip, four weeks into the 2017 season, received possession to start the game against the hosting Lousiana State (LSU) Tigers.

They held that possession for the opening six seconds of the game because on the very first play of the match-up, Syracuse junior quarterback Eric Dungey was intercepted by redshirt-freshman cornerback Andraez Williams, who returned the ball 28 yards to the Syracuse one-yard line.

LSU junior running back Derrius Guice would gain the one yard needed to put the first points on the board for either squad a mere nine seconds into regulation, leading 7-0 with 14:51 remaining in the first quarter.

The Orange would respond with points, but not in the endzone, when senior placekicker Cole Murphy booted the ball through the uprights from 42 yards away to make it 7-3 LSU with 7:58 remaining in the first quarter.

Defense would take over on both sides from there, with the Tigers forcing the Orange to punt five straight times while the Orange forced the Tigers to kick it away on four straight possessions.

Syracuse sophomore wide receiver Sean Riley would break free and Dungey would as well, sending the ball to the endzone to the hands of Riley, but Riley would not hold on.

LSU took that blown opportunity and turned it into a touchdown of their own when sophomore wide receiver Stephen Sullivan took a slant route forward 43 yards and into the endzone off a pass from starting senior quarterback Danny Etling, giving the Tigers a 14-3 lead at halftime.

Momentum was there for the Orange and fell off the fingertips of Riley.

The worst case scenario was Syracuse allowing a touchdown before the break to LSU, especially with no way to make an immediate offensive response of their own in the second half, due to the fact that LSU would receive the ball at the start of the third quarter.

Just as they did at the beginning of the first half, the Tigers needed just one play to get into the endzone, scoring this time on an 87-yard play from Etling to sophomore wide receiver Drake Davis, taking a mere 25 seconds off of the second-half clock.

Syracuse would respond at the start of the second half with a score of their own just as they did in the opening of the first half, but this time it would be for seven points instead of three. Senior wide receiver Erv Philips would catch the ball and fall into glory territory on a 30-yard pass play that did not come from starting quarterback Eric Dungey. The pass that set up Syracuse's first touchdown of the game instead came from sophomore wide receiver Devin C. Butler who roled left of the pocket and threw the ball on a magnetic pull that ended in the hands of Philips, getting the Orange to double-digits, down 21-10 with 12:20 left in the third quarter.

The Orange would force the Tigers to punt on their next drive, but would do no better on their own drive, punting it right back to the Tigers. On the drive that began off of Syracuse's punt with 8:46 remaining in the third quarter, LSU would lean on senior running back Darrel Williams for six of the seven plays. Williams would gain 46 receiving yards and 34 rushing yards on this drive alone, grabbing 43 of his 46 receiving yards on a catch on 3rd-&-4 where freshman quarterback Myles Brennan, who had come in for his first drive of the game, sent a pass Williams' way and then Williams took off down the sideline with some help in the blocking department. On the very next play, Williams would take the hand-off from Brennan 20 yards to paydirt, elevating LSU to a 28-10 advantage.

That advantage would dwindle, however, with Syracuse scoring 16 unanswered points in the following 12 minutes and 49 seconds.

Now down 28-12, Syracuse would receive the ball on the ensuing LSU punt.

During this drive, on third down, Dungey would send the ball low to Butler. Originally, the play was ruled a catch, but after review, the officiating crew overturned the call, taking the Orange from a first down and placing them into a 4th-&-5 instead. Dungey and the offense remained on the field late in the third quarter on this fourth-down attempt, and it proved beneficial, when Philips took a backward pitch from Dungey around to the left side and forward, pushing over the threshold of a new set of downs.

Junior tight end Ravian Pierce would take some contact before the catch and grab a hold of the ball nevertheless, moving Syracuse to the LSU 14-yard line. From there, Dungey called his own number, committing to the run from the jump, rolling out right and surging forward to meet the Tigers with contact of his own, pushing his defenders into their own endzone for a 14-yard score that brought the LSU lead down to 28-18 with seven seconds left on the third-quarter clock.

The Orange would elect to try an extra point as opposed to attempting a two-point conversion and Murphy would send the ball between the goal posts, moving Syracuse to a 28-19 deficit.

LSU would get to the Syracuse 28-yard line on the following drive, threatening to move themselves farther out of reach of Syracuse, but redshirt-junior cornerback Juwan Dowels did not like that scenario, and flipped the script by intercepting Brennan on Syracuse's 20-yard line.

Capitalizing off of this Tigers' turnover, the Orange would go 80 yards on 13 plays, taking five minutes and one second off of the fourth-quarter clock, en route to senior wide receiver Steve Ishmael's first touchdown of the 2017 season.

Dungey would gain 15 yards on his quarterback keeper up the middle of the field, moving his body to elude an LSU defender for a first down, but the play would be negated by redshirt-sophomore right guard Evan Adams due to a holding penalty. On top of this penalty, Dungey would have to come off the field because he took his helmet off after the play.

Senior quarterback Zack Mahoney would enter onto the field to lead the offense for two plays before Dungey returned. When Syracuse last faced LSU, back in 2015 inside the Carrier Dome in Syracuse, New York, Mahoney served as quarterback, a preferred walk-on fifth-string signal-caller filling in for an injured Dungey, and Mahoney almost did what many thought was impossible. Though Mahoney and the Orange did not win that game, they came within 10 points of LSU, 34-24. If Syracuse had made the field goal they missed and former LSU running back Leonard Fournette did not score on a freak 71-yard touchdown run that was a moment away from never happening with Syracuse about to take down then-LSU quarterback Brandon Harris, the game would have been tied at 27.

On 3rd-&-19 from his own 27-yard line, Dungey would drop back and send the ball to the hands of Philips, who did not gather the reception, dropping the opportunity as others did in the receiving game for the Orange versus the Tigers. But, LSU bailed out their adversary when freshman linebacker K'Lavon Chaisson was flagged for roughing the passer, providing Syracuse with a new set of downs and rolling the Orange forward from their own 27-yard line to their 42-yard line.

Before this Syracuse drive, LSU had one penalty to Syracuse's seven.

After roughing the passer, the Tigers would be flagged for a consecutive time, this for too many men on the field, giving the Orange a 1st-&-5 opportunity from the Syracuse 47-yard line.

Syracuse would gain two more first downs on this drive, including on a play where Dungey would elude pressure and toss the ball high to Pierce who would reach straight up for the ball with one hand, catch it, and fall down with possession.

True freshman wide receiver Nykeim Johnson would attain the next first down for the Orange on a 10-yard reception that would roll the Orange to the Tigers' 33-yard line.

Dungey would then go to senior wide receiver Steve Ishmael for an eight-yard gain to the LSU 25-yard line.

Two plays later, a 3rd-&-1 situation for Syracuse, Dungey would throw Ishmael's way again, and Ishmael would attain possession of the ball inside the endzone, for a 22-yard score which became Ishmael's first touchdown of the 2017 season. This score and following extra point by Murphy brought the Orange to their smallest deficit of the game, two points, 28-26 with 5:40 remaining in the contest.

On the verge of taking momentum once again, Syracuse lined up for the kickoff.

This time, they went for the onsides kick, but the ball went high and downfield farther than any of the Orange players were. The Tigers gathered possession without an issue and started their drive on the Orange 44-yard line.

Syracuse's decision to go for an onsides kick that ended up not being executed well would be the gift that kept on giving, but for LSU, not Syracuse.

The Tigers would gain two first downs on this drive, moving to the Orange 17-yard line.

Despite Syracuse handing LSU a three-yard loss on a rush attempt by Williams that sent LSU back to the Syracuse 20, one play that ends in a loss does little when you allow a substantial gain on the following attempt by your foe, and Syracuse did exactly that. Senior wide receiver D.J. Clark came from the left to right while Etling, who had returned to the game, faked the hand-off to Williams. Clark took the end-around and got around the corner of the defense and sprinted ahead into the endzone for a 20-yard touchdown run that would close the door for good on the Orange in this game as the Tigers elevated to a nine-point lead, 35-26, with 1:52 to play.

This was a game in which the pendulum swung, but instead of one team swinging it in their favor and the other doing the opposite, it seemed more as if Syracuse swung it either toward themselves or away from themselves.

Not taking anything away from the Tigers, the Orange had no chance, to many onlookers, of ever winning this game.

They threw for more yards than LSU, but did not do enough on the ground to create a balanced attack.

Syracuse made catches at the right time, but also dropped balls when opportunity was there for the taking.

The Orange defense stole away from the Tigers a moment close to the Orange endzone on Dowels' interception and forced a safety on a one-two punch that began with Hofrichter and the special teams' unit placing the Tigers at their own one-yard line. Syracuse's defense also tackled LSU for losses and challenged them on multiple drives, yet they gave up touchdowns, and not just any scores, but those that came on substantial big-yard gainers.

Improvement for Syracuse there was, as Yoda might say.

But 60 minutes of play they did not have.

Despite making this game close, the gap was never bridged, sending the Orange to a 2-2 record, heading out of non-conference play and into the Atlantic Coast Conference (ACC) for the final eight games of the 2017 regular season.

Next up for the Orange is their second road match in as many weeks, this one with an N.C. State Wolfpack team that defeated the top-12 ranked Florida State Seminoles on the road in Tallahassee, Florida, in Week 4. Syracuse and N.C. State kick off in Raleigh, North Carolina, on Saturday, September 30, at 12:20pm ET.