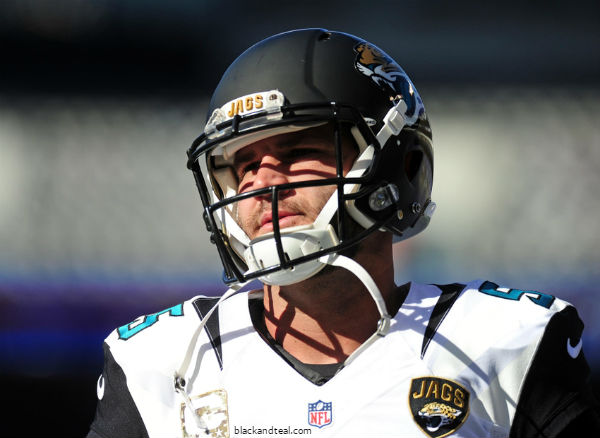 The Jacksonville Jaguars headed onto familiar territory, back on their home field after falling to the San Diego Chargers on the road in Week 2.

About halfway through the first quarter, Jaguars' defensive end Dante Fowler, Jr, and cornerback Davon House were left chasing Baltimore Ravens' quatrerback Joe Flacco en route to the first score of the game, a quarterback keeper from seven yards away that gave Baltimore the early advantage, 7-0.

Jacksonville quarterback Blake Bortles would miss an opportunity off a run fake to follow and could have gone to running back T.J. Yeldon but instead threw into a plethora of coverage, resulting in an interception that gave the ball back to the Baltimore toward the end of the first quarter.

That same drive would continue to open the second quarter, where Baltimore would capitalize on the opportunity given to them from the Bortles' interception when kicker Justin Tucker connected from 43 yards away to make it 10-0 Baltimore with 11:07 before half.

Jaguars' longtime tight end Marcedes Lewis caught the short pass and took off but it was negated by an offensive holding penalty.

In the same drive, Bortles threw into a flock of Ravens once again and it almost counted for his second interception, but luckily for the Jaguars, the Ravens did not hold onto it. However, the play would put the Jaguars on fourth down and end their drive anyway, punting it away.

Jacksonville defensive tackle Malik Jackson sacked Flacco for an eight-yard loss to follow and linebacker Telvin Smith would tackle Baltimore running back Justin Forsett after Forsett's reception on third down to bring forth a punt by the Ravens, a punt that Jaguars' wide receiver Rashad Greene returned 42 yards to the Ravens' 47-yard line.

Bortles went over the middle shortly after to Allen Robinson again and gained another first down, placing the Jaguars on the Ravens' 5-yard line.

A fake handoff to running back Chris Ivory going left and Bortles rolling right led to Bortles sending the ball to Allen Robinson for the Jaguars first score of the game, making it 10-7 Ravens with 1:55 before the break.

Jacksonville had Baltimore on their heels and then Jackson got flagged for roughing the passer as a consequence of putting his hand on Flacco's facemask, giving Baltimore new life with a fresh set of downs.

Flacco threw to tight end Dennis Pitta who gained another first down for the Ravens before cornerback Dwayne Gratz got to him.

But Jaguars rookie defensive lineman Yannick Ngakoue would sack Flacco on second down for a 7-yard loss and force the Ravens to use their final timeout.

A defensive stop to follow, rookie versus rookie, by cornerback Jalen Ramsey on wide receiver Chris Moore would stop a Baltimore pass play at two yards and bring Baltimore to 4th down.

Tucker tried a 57-yarder and was short, but a leverage penalty on Fowler, Jr., gave the Ravens another opportunity despite time having expired. Tucker gave it another go, this time from 42 yards away, and connected, providing Baltimore with a 13-7 advantage heading into a break in the action at the half.

Baltimore would start the second half just how they finished the first, with a field goal, this one 32 yards away and throgh the uprights off the foot of Tucker, 16-7 Baltimore.

On the Jaguars' first drive of the second half, Bortles would go to wide receiver Marqise Lee twice for first downs.

Bortles would look around and then take it himself, sliding by the first-down marker and was hit, but the officials picked up the flag and Jacksonville would be a yard short (2nd-&-1).

When the run did not work, Bortles went to Lee once again for Lee's third first-down play on the drive.

On the very next play, Bortles went to Allen Robinson on the right side of the end zone and it appeared to be a catch, but was ruled an incomplete pass.

The Jaguars challenged the call and the play was overturned, giving Allen Robinson his second touchdown of the game and getting the Jaguars within two points of the Ravens, down 16-14.

Baltimore and Jacksonville would trade punts back and forth to follow, with Jacksonville into the final quarter still down by two.

With a little over nine minutes to play, the Jaguars punting the ball anyway ended up turning into a very long offensive play, courtesy of Ravens' returner Devin Hester losing the handle on the ball and Jaguars' running back Denard Robinson reeling the ball in with one hand to gain possession back for the home team.

That drive would conclude with Jacksonville kicker sending it through from 49 yards away to give the Jaguars their first lead of the game, 17-16, with 7:27 to play.

On the following drive, rookie cornerback Jalen Ramsey made another big defensive play, this trumping his former, when he tipped the ball in the field and free safety Tashaun Gipson caught it for the interception.

But an interception negated an interception, when the Ravens tipped the ball at the line, courtesy of defensive tackle Timmy Jernigan, and into the hands of cornerback Tavon Young.

Jaguars' linebacker Paul Posluszny intercepted the ball back and the home team took possession back, starting on the Ravens' 29-yard line.

On 3rd-&-6, Baltimore defensive end Lawrence Guy would sack Bortles and Jacksonville would attempt a 52-yard field goal, but were blocked.

The Ravens would take over with no timeouts remaining and have to go for it on 4th-&-2.

Flacco would step back and complete the ball to wide receiver Steve Smith, Sr., for the first down as both teams headed into the two-minute warning.

Coming out of the two-minute warning, Baltimore was on Jacksonville's 44.

The Jaguars did not allow much, forcing 4th-&-1, but it was problem for one of the best in the game as Tucker sailed it through the uprights from 54 yards away to take back the advantage, 19-17, with 1:02 to play.

On second down, Bortles would elude a sack only to allow himself to be sacked shortly after, failing to get rid of the ball, leaving Jacksonville to use their final timeout with 32 seconds to play.

Holding penalty on the offense pushed the Jaguars back to their own 12-yard line and Bortles would follow by throwing his third interception of the game and the Ravens would run the clock out to a 19-17 victory.

Baltimore improved to 3-0 as Jacksonville fell to 0-3 in yet another close contest for the Jaguars at home this season, that did not end in their favor.