A Comeback Stopped A Yard Short: Jaguars vs. Packers 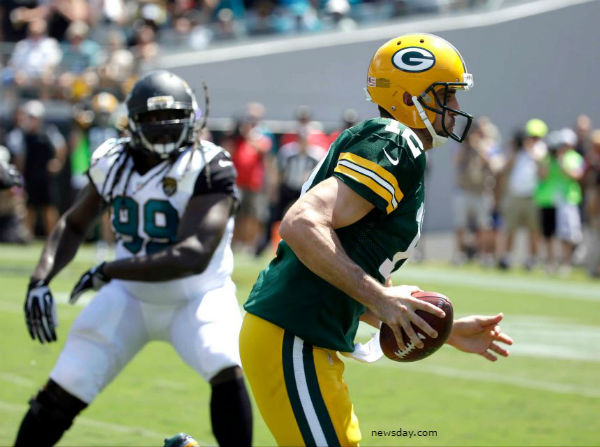 In front of a ticket distribution of 63,179 onlookers at EverBank Field, the Jacksonville Jaguars opened their first drive with a positive and a no-so-positive. Running back T.J. Yeldon ran on first and second down to provide the Jaguars a new set of downs, but that was followed by quarterback Blake Bortles throwing to the wrong shade of green, when Packers' linebacker Joe Thomas intercepted a ball meant for Jaguars' wide receiver Marqise Lee.

Green Bay would capitalize off of Jacksonville's misstep, with quarterback Aaron Rodgers finishing their first drive of the game with a six-yard quarterback keeper, getting Green Bay on the board first, ahead 7-0 with 9:36 left in the first quarter.

After both teams punted the ball away, Jacksonville would start at the Green Bay 48-yard line.

Longtime Jaguars' tight end Marcedes Lewis would grab most of those 48 yards after a catch-and-run that went 37 yards to the Packers' 11-yard line.

Yeldon would go back to work from there, carrying the ball for six yards and then gaining the final five yards en route to his first touchdown rushing and first touchdown overall of the 2016-17 season, tying the game at 7-7 with 3:40 remaining in the first quarter.

Forcing a second punt by Green Bay, Jacksonville would get the ball downfield early in the second quarter, with Bortles going 5-for-7 on his pass attempts, including a conversion on 4th-&-5 to wide receiver Allen Robinson for the first down.

Tight end Julius Thomas would gain a first down for the Jaguars on the next play as well, his second catch of the day with the Jaguars' tight ends leading the charge early.

But the Jaguars would not reach the end zone, with the drive ending on a 26-yard field goal attemot on 4th-&-4 by kicker Jason Myers, giving the Jaguars their first lead of the game, 10-7, with 7:48 before half.

On the following Packers' drive, Jaguars' free safety Tashaun Gipson saved a touchdown try by running back Eddie Lacy after strong safety Johnathan Cyprien tried but did not bring Lacy down.

Then Rodgers went to work.

With the offensive line giving him forever and a day, he found wide receiver Jordy Nelson for Nelson's first touchdown since missing all of last season due to injury, happening with 3:05 left before half. Rodgers somehow got the ball past the body of a Jaguars' defender, finding Nelson ta millisecond before the defense got there, providing the Packers with the advantage once again, at 14-10.

On Jacksonville's drive to follow, Bortles looked away from his first read & sent it downfield to wide receiver Allen Hurns who got away from his defender, resulting in a 30-yard gain.

Later on in this drive, Julius Thomas showed his ability to pick up speed and work off of a defender as he got himself ahead & got his hands free to grab the Bortles pass in the end zone to give the Jaguars the lead back, 17-14, with about a minute to go before the break.

It seemed as if Jacksonville would go into halftime with the advantage.

But a pass interference call on Cyprien gave up a huge chunk of yards, moving the Packers from their own 25-yard line to the Jaguars' 45.

Shortly after, Rodgers had his jersey held, the pressure was on, and, once again, he somehow got the ball into a tight hole, with wide receiver Davante Adams catching and falling inside the end zone, with cornerback Jalen Ramsey on his back. Threading the needle may have been an understatement on this one, as the lead got retaken by the Packers, 21-17 heading into the locker rooms.

The Jaguars got through, but not to, Rodgers to open the third quarter. Rodgers stepped up and through a hole provided, sent downfield to wide receiver Randall Cobb who bobbled but held on for a 32-yard gain on third down.

Then, Rodgers targeted Rodgers: Aaron to his tight end Richard. The ball looked like it was placed outside of Richard Rodgers, but he outstretched and reeled it in for the first down.

But the Jaguars responded by only allowing a field goal to the Packers, despite allowing them into their redzone, making it 24-17 Packers with 10:12 left in the third quarter.

Hurns would save the next drive for Jacksonville, getting a step on his defender and catching the ball, going for 38 yards.

Shortly after on 3rd-&-2, the chain crew measured and gave the first down to the Jaguars off of a run by running back Denard Robinson, putting the Jaguars on the Packers' 24-yard line with a new set of downs.

The Jaguars, however, would only gain three yards on the next three plays and go for the field goal on 4th-&-7, which Myers' sent through the uprights from 39 yards away, 24-20, with 6:15 remaining in the third quarter.

Defensive holding and Lacy taking off for 27 yards placed the Packers inside the Jaguars' redzone once again, but once again, the Jaguars did not allow a touchdown. The Packers concluded this drive with a 20-yard field goal by kicker Mason Crosby, which made it 27-20 with 12:01 to go in the game.

Myers would boot it from 50 yards away to bring the Jaguars within four, 27-23, later in the fourth quarter.

Then, Rodgers would call timeout which was followed by a delay of game penalty and then a pass attempt too short to Nelson.

With the Packers punting the ball away with 3:24 to go, the Jaguars had life.

They would take that breath of life in the game to the final 23 seconds.

But on 4th-&-1, Jacksonville elected to pass to the outside as opposed to running it up the middle. Hurns caught the ball but was knocked behind the first-down marker, knocking out the Jaguars final try at a comeback.

As a result, Green Bay moves forward at 1-0 with a 27-23 victory and Jacksonville begins the season at 0-1.